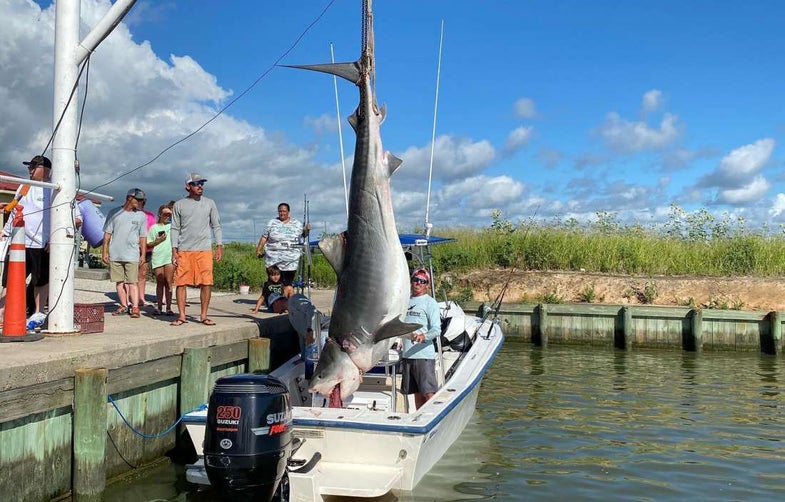 The Fuller brothers—Avery, Clint, and Tyler—were fishing the Texas City Jaycees tournament 40 miles off Galveston on July 1 when Avery hooked into a tiger shark nearly as big as their Mako fishing boat, according to MySanAntonio.com.

It took the 26-year old Texas City angler only 25 minutes to bring the 12.5-foot long shark to the boat. The brothers then brought the fish to the tournament weigh station, where it was hoisted by the tourney weighmaster. Avery’s incredible catch was officially weighed at 1,004.3 pounds, winning the tournament shark division, and earning $4,500 for Fuller fishing team.

The shark is a dream catch for Avery. He’s wanted a half-ton tiger shark for years, trying to match the catch his father made nearly 35 years ago. Fuller’s dad caught a 1,080-pound tiger shark.

“I’ve accomplished a goal of mine that I’ve had for a long time,” Fuller told MySanAntonio.com. “I finally caught a tiger shark over 1,000 pounds on my Mako boat just like my dad did in his Mako [boat].”

Texas has a 64-inch length limit minimum for tiger sharks and the daily bag limit is one fish for all allowable shark species. Fuller’s fish easily covers that requirement.

“We harvested the fish, and kept its jaws as well,” Avery says. “The fish [meat] was given away to many people.”

While Fuller’s fish is massive by any measure, tiger sharks are known to grow to enormous sizes. The IGFA record for the species is 1,785-pounds, caught in Australia in 2004. A legendary 1,780-pound tiger shark was caught in the Cherry Grove, South Carolina, in 1964 by Walter Maxwell while fishing from an ocean pier. The Texas state-record was caught by Chap Cain III in 1992. It measured 13.5 feet and weighed 1,129 pounds.