Jeremy Duffie and his brother Capt. Jon Duffie took home the giant paycheck after competing in the event for more than 20 years 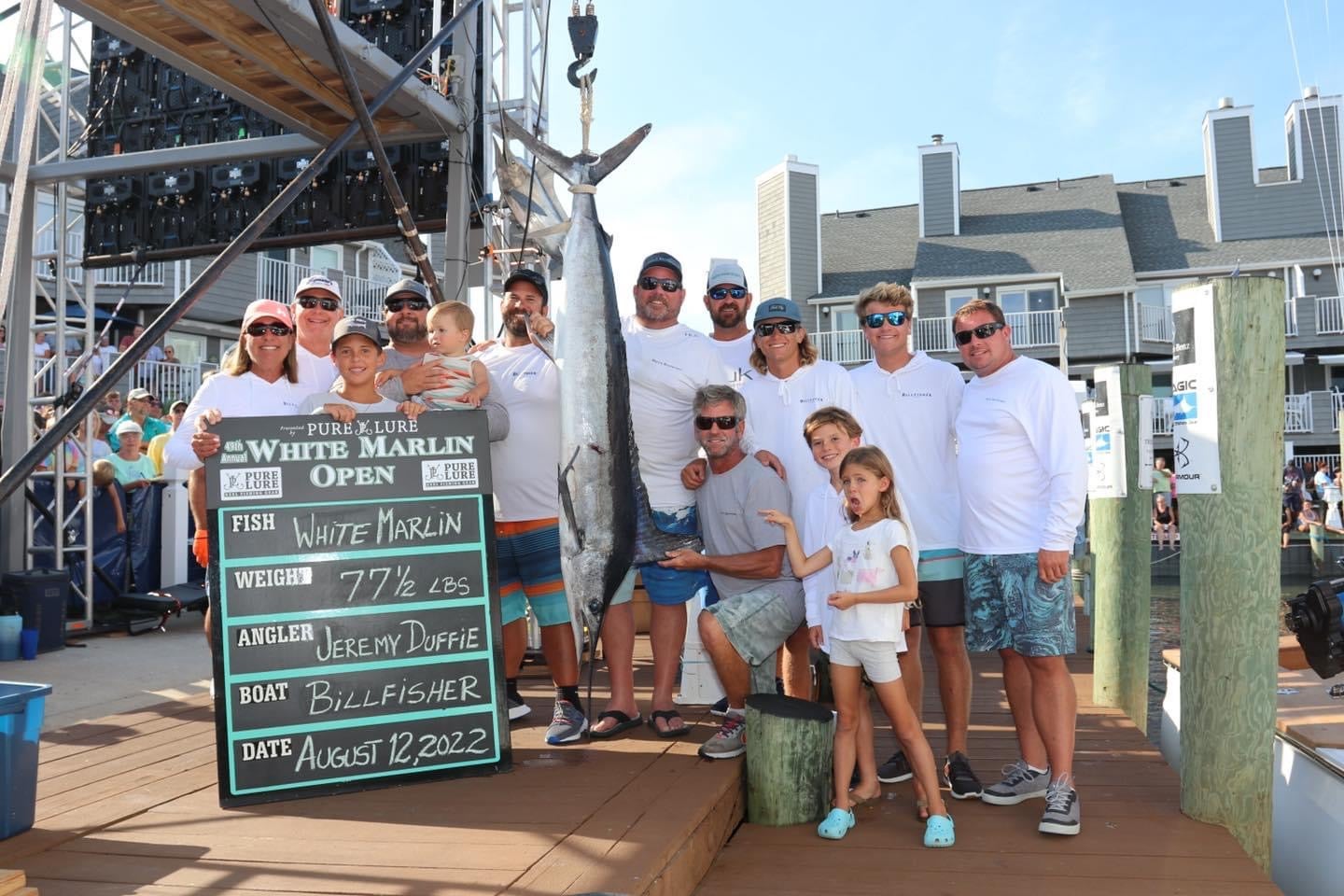 The Duffie brothers (center) and family stand next to the tournament-winning fish. White Marlin Open
SHARE

During last week’s White Marlin Open, angler Jeremy Duffie and his brother Capt. Jon Duffie took home a different kind of world-record: a check totaling roughly $4.5 million. It’s the largest payout of any fishing tournament in history, surpassing the previous record of roughly $3.5 million that was set during the Big Rock Blue Marlin Tournament this July.

Billed as the “World’s Largest and Richest Billfish Tournament,” the 49th annual White Marlin Open that took place from Aug. 8 to 12 lived up to its reputation last week. A total of 408 boats participated in the deep-sea fishing tournament, with thousands of anglers vying to catch the heaviest wahoo, dolphin, tuna, and marlin from the tournament’s base in Ocean City, Maryland.

As the organizers pointed out afterwards, “the billfishing was lousy” for most of the week. They explained that in a typical year like 2019, around 1,500 billfish were caught. This year’s Open saw just over 200 billfish landed in five days. Most were released according to tournament regulations, and the ones big enough to be weighed didn’t arrive at the dock until Thursday.

One of those fish was a 511-pound blue marlin taken by Bill Britt from Sandy Spring, Maryland. It took the blue marlin division, which paid out a check worth $1,208,420 to Britt and the rest of the Cabana crew.

As the tournament’s name implies, however, white marlin were the stars of the show. Maxing out around 180 pounds, whites are the smallest of the major billfish species, but they are highly sought on the East Coast, where they show up every summer during their migration from the southern Caribbean to the Middle Atlantic.

Going into the final day of the Open, C-Student, a boat out of Texas, had weighed the largest white marlin of the tournament—a 71.5-pounder. But that changed around 6:20 p.m. on Friday, when the Ocean City-based Billfisher pulled up to the scale with a white marlin weighing 77.5 pounds.

Custom-built and captained by Jon Duffie, Jeremy’s brother and the owner of Duffie Boatworks, the Billfisher is one of the more well-known boats at the Ocean City port. Capt. Duffie has built his own reputation chasing billfish off the Maryland coast, and according to Saltwater Sportsman, he holds the modern-day record for the most white marlin releases in one day: 57.

Now Capt. Duffie can check another record off the list, as the crew of hometown heroes won the week and took home the biggest paycheck in tournament fishing history. In addition to weighing the largest white marlin of the Open, the Billfisher also released the most marlin of the event and won the Top Boat category.

“My brother and I have been fishing out of Ocean City since we were born,” Jeremy told Sport Fishing Magazine Monday, adding that the brothers have competed in the White Marlin Open every year since 1996. “Winning has always eluded us,” he added. “Now we’ve done what we wanted to do.”