The fish will likely replace the 41-year-old state record 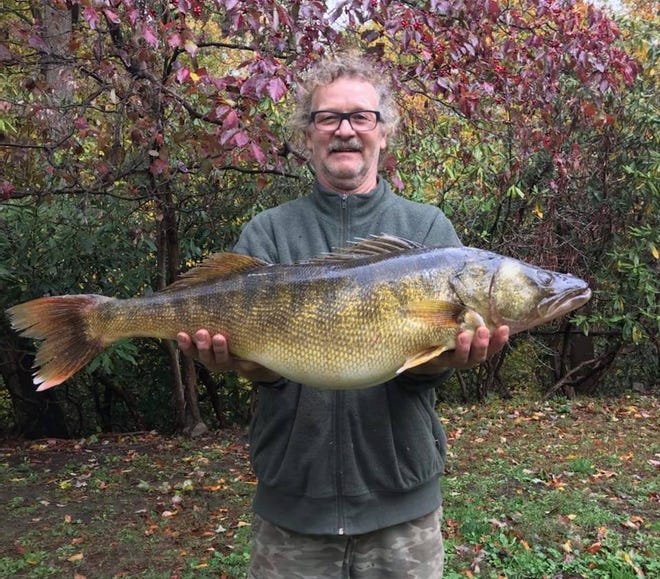 Angler Richard Nicholson proudly holds up his 18.1-pound walleye, which is likely a Pennsylvania state record. via Reddit
SHARE

Richard Nicholson, 62, of Connellsville, Pennsylvania, caught a 9-pound walleye from the Youghiogheny River near his home Thursday. He was elated with the 27-inch, 9-pounder, until it was displaced by a new catch just hours later: a walleye twice that size. If accepted by the state, the fish will become a new Pennsylvania record for the species, edging out the standing record from four decades ago by nearly half a pound, according to the Erie Times-News.

Nicholson hooked the fish on a live creek chub minnow around 7 p.m. on Oct. 28. He fought it for 20 minutes using 6-pound test line and a super-supple noodle rod. Nicholson was fishing with his son, Richard Nicholson Jr., who was netting the heavy walleye when the net’s handle broke. The father-and-son team was able to muscle the fish to shore, where they weighed it, bottoming out an old spring scale they had with them. They kept the fish alive in a homemade bait tank, and when Nicholson Jr. researched the state record, he realized that his father’s fish could potentially replace it.

They transported the walleye to a certified grocery store scale, where the fish weighed in at 18.14 pounds. This bests the current Pennsylvania state record walleye of 17 pounds, 9 ounces, which was caught from Allegheny Reservoir in 1980 by angler Mike Holly.

Sgt. Mike Walsh of the Pennsylvania Fish and Boat Commission said on Nov. 1 that Conservation Officer Scott Opfer confirmed the Nicholson walleye and that “right now it does beat the record.” Nicholson must now fill out the appropriate state paperwork, which will be reviewed before the fish becomes an official state record.

Nicholson wanted to clean and eat the big walleye right away, but his son stopped him so the fish could be officially measured and weighed.

“He almost filleted it but I made him wait till I checked the books,” wrote a Reddit user who identified himself as Nicholson’s son. “Sure enough he put the knife down lol.”

The fish will be mounted by a taxidermist, and the angler is hoping for a replica mount so he can still enjoy a succulent walleye feast with family and friends.

“I’m a meat eater…and I want to have a walleye party,” Nicholson told the Times-News. “I still can’t believe I caught it. The best part is that my son was with me.”