South Carolina Fishing Buddies Caught the Biggest Walleye in State History, but Still Have to Share the Record

Due to a technicality, the 10-pound, 1.44-ounce fish tied the previous South Carolina walleye record, even though it's more than an ounce heavier 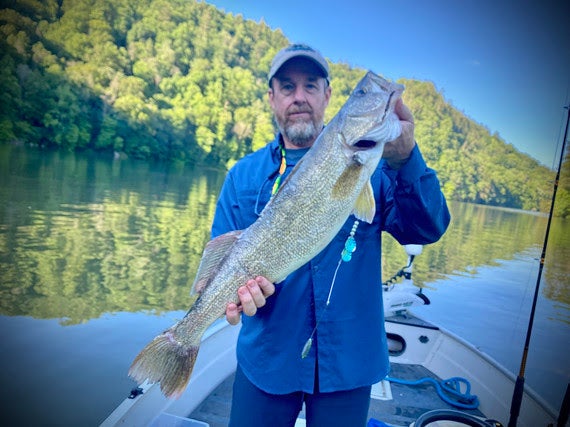 It only took two hours of trolling on May 29, for Chris Edlund and Dave Starzek to catch the biggest walleye ever recorded in South Carolina. The two friends had put in on Lake Tugalo around 6:30 that morning and were fishing from a 13-foot Lowe skiff.

Edlund, a resident of Spartanburg, South Carolina, hooked the fish and reeled it in, while Starzek, of Greer, South Carolina, netted it. So even though it’s Edlund’s name that’s now in the record books, he shares some of the credit with Starzek, according to Georgia Outdoor News.

The Palmetto State isn’t well-known for walleye, which are a cold-water species native to Canada and the Midwest. There are only a few locations where reproducing populations exist in the state. But Starzek, a Michigan native, grew up walleye fishing, and he’s been targeting them on Lake Tugalo for years now.

“It’s a passion, and it’s been a long time coming,” Starzek told the South Carolina Department of Natural Resources.

After landing the fish, the two pulled their boat out of the water and began looking for a certified scale. After hours of searching, they were finally able to get the walleye officially weighed at a grocery store in Greer.

Because of Lake Tugalo’s unique location on the South Carolina-Georgia border, the fish was eligible as a record in both states. It wasn’t heavy enough to compete with the Georgia state record—a 14-plus pound fish that was caught from Lake Rabun in 2016—but it was more than a pound heavier than the current South Carolina state record of 10 pounds.

Read Next: Missouri Fisherman Catches State-Record Walleye on a Trotline

The South Carolina DNR recently certified Edlund’s record walleye. For now, he’ll have to share the No. 1 spot with Robert Huskins, who caught his 10-pounder from Lake Russell in 1994.