The fish’s first run was a scorching 600 yards, and it took nearly an hour for the five-man crew to bring it to the boat 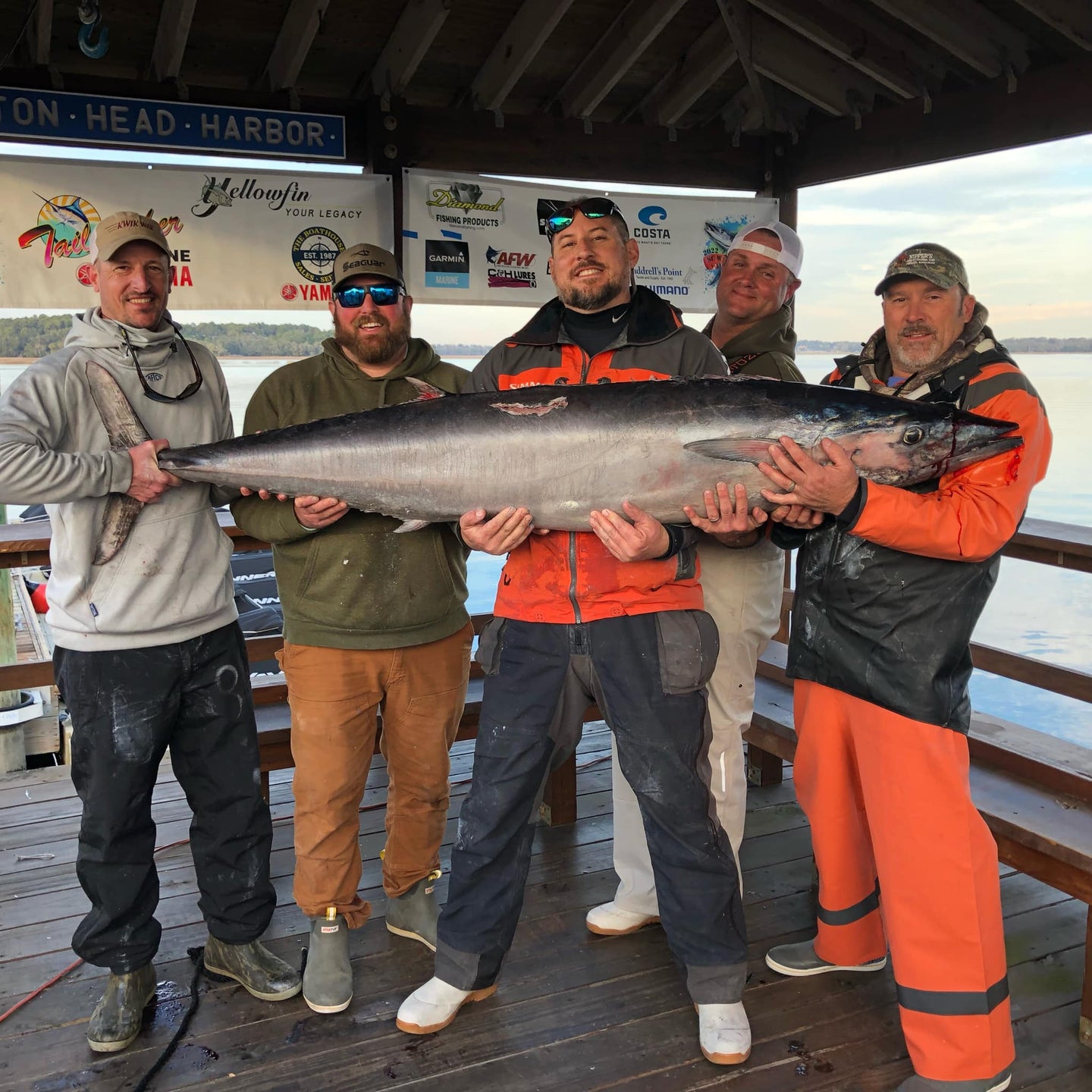 Few fish possess the power and speed of a big wahoo. And a crew of anglers participating in the South Carolina Wahoo Series Tournament was reminded of just how fast and powerful these fish can be when they landed a nearly 7-foot wahoo earlier this month. The fish weighed just under 120 pounds, and the boat’s captain called it a “fish of a lifetime.”

On Feb. 11 the crew of the Reel Labor, captained by 53-year-old Mark Pate, was high-speed trolling in 180 feet of water about 70 miles off the South Carolina coast. This is specialized fishing, as wahoo like to attack fast-moving lures trolled in open water, and the fish have a reputation for making lighting-fast runs when hooked. The team of anglers was aboard a 31-foot Cape Horn boat, and they had caught a smaller 23-pound wahoo earlier that morning. They were trolling big artificial lures at a speed of roughly 14 knots when suddenly one of their lines was hit. But the rod didn’t bend much, and the line didn’t go blistering off the Shimano Tiagra 50 reel right away.

“We went to the rod in a boat holder thinking a fish had hit but missed the lure,” Pate says. “But when we got hold of the rod, that woke the fish up, and it rocketed into a run like we’d never seen previously—and we’ve been chasing wahoo for a long time.”

Pate also says he was stunned by the speed and sheer distance of the wahoo’s first run. The high-end Shimano reel was spooled with 130-pound test line, and its drag pressure was set at 20 pounds.

“That fish showed us what a 120-pound wahoo can do,” says Pate. “One that big is a whole different class of wahoo, and its run [was] impossible to believe unless you [witnessed] it. Its first run was 600 yards, and there was nothing to do but watch the reel scream and the line evaporate off the spool like it was tied to a Ford pickup in a drag race. The reel actually got hot from that run.”

The crew quickly cleared the stern of the four other trolling rods. Then they took turns fighting the fish, which made repeated runs that required a whole lot of cranking and some boat maneuvering. Finally, nearly an hour later, the fish was drawn close to the Reel Labor. One angler grabbed the leader, but he couldn’t hold the giant wahoo as it zipped around the stern and almost cut the line on one of the motors.

“The fish crossed behind the engines, and one of our guys got a gaff in it while standing on the motor platform,” Pate explains. “That’s when I put the boat in neutral, stepped fast to the stern and hit the fish again in the head with a second gaff.”

The crew was then able to muscle the big wahoo aboard, and Pate slumped into a boat chair—exhausted and relieved that they landed the fish. He says the crew was whipped after the fight, and since the odds of them catching another fish that size were slim to none, they headed straight back to Hilton Head Harbor Marina.

Back at the dock, the wahoo officially weighed in at 119.3 pounds. It was 79-inches long with a 35-inch girth. The crew of the Reel Labor included South Carolina anglers Justin Dox, J.R. Spencer, Chris Mills, and Scott Farmer.

“It’s the fish of a lifetime, like a 200-inch Pope and Young buck taken by a bowhunter,” Pate says. “Three of our five-man crew will have a replica mount made of the fish, because none us expects to ever get another one like this.”

The all-tackle world record wahoo weighed 184 pounds, and was caught in 2005 by Sara Hayward near Cabo San Lucas, Mexico. This 120-pound fish struck a C&H American Express blue-and-white offshore lure, which Pate says is an old standby from the C&H Lure company based in his hometown of Jacksonville, Florida. Pate says he bought the lure from the late (and legendary) angler Don Combs.

The South Carolina Wahoo Series Tournament runs through April 17 out of several ports along the coast and offers a top prize of $35,000. According to tournament rules, the champion will be determined by the boat with the heaviest two-fish aggregate weight. And looking at the leaderboard, the Reel Labor is currently well ahead of the rest of the pack with a total weight of 162.3 pounds.

“We’re all great friends, and as a team we’ve been fishing this wahoo tournament for almost 10 years,” Pate says. “It’s really a dream come true catching a wahoo this size. And if we win the tournament, it’ll be an even bigger bonus.”