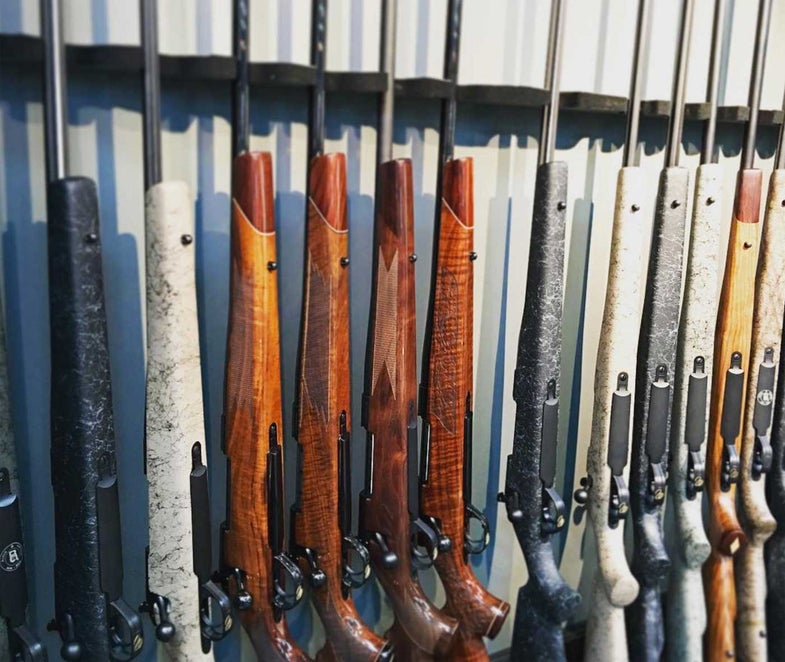 A collection of Weatherby rifles. John B. Snow
SHARE

Republicans now hold 54 of the Senate’s 100 seats and their largest majority in the House in 90 years — 247 to 188. If you listen to pundits, poll-watchers and puffateers, the scenario for 2017 and beyond could be drastically different after the Nov. 8 election.

Although most expect the GOP to retain a diminished majority in the House, Republican control of the Senate — achieved in 2014 — is in doubt.

This, of course, is a concern for gun-owners. If Democrats gain control of the Senate and Hillary Clinton defeats Donald Trump, she’ll galavant into the White House with the proverbial “mandate” and the actual numbers to effectively do what she’s said she’s going to do — pressure lawmakers into adopting her “common sense” nine-point gun control plan.

And she’ll need the numbers. Because, despite the campaign rhetoric, emotional fear-mongering and ideological rigamarole that often blurs any intelligent discussion of virtually any issue anymore, when it comes to actually implementing eight of Clinton’s nine objectives, she’ll need legislative accomplices, especially in the Senate.

Of Clinton’s nine gun-control objectives — impose universal background checks, close three (nonexistent) “loopholes,” repeal the Protection of Lawful Commerce in Arms Act, expand the definition of ‘domestic abusers,’ make ’straw-purchasing’ a federal crime, reinstate the ‘assault weapons ban,’ and keep firearms out of the hands of the mentally ill — only one could be achieved solely through executive action by tweaking rules and regulations and that is the one addressing firearms and the mentally ill.

The other eight would either require federal legislation, are already laws, or already proposed laws. In fact, even the objective to “keep firearms out of the hands of the mentally ill” is incorporated into several proposed House and Senate bills.

That is why retaining control of the Senate is important for gun-owners and even more critical should Hillary assume the Oval Office in January. Depending on the source, between six and 10 Republican incumbents could lose re-election bids to Democratic challengers on Nov. 8.

Of those incumbents, Sen. Pat Toomey of Pennsylvania — cosponsor of the Manchin-Toomey failed 2013 compromise background check bill — and Sen. Mark Kirk of Illinois are not regarded as reliable defenders of gun-owners’ rights anyway, the former amenable to concessions for political gain and the ladder never a reliable proponent of the Second Amendment anyway.

But the results of these races could unseat proponents of gun-owners’ rights with anti-gun zealots:

Ohio: Republican incumbent Sen. Rob Portman — who has an ‘A’ rating by the NRA — is being challenged by former Gov. Ted Strickland in this pivotal swing state. The good news, according to W. James Antle III in an Oct. 27 Washington Examiner article, is statewide polls put Portman ahead of Strickland by 16 points in what should be a victory for gun rights and the GOP.

Indiana: Republican Sen. Dan Coats (‘C+’ NRA rating) is retiring. Democratic former Governor Evan Bayh (‘F’ NRA rating) is seeking to regain the seat he “retired” from in 2010 and add to his legacy of gun-control zealotry. He is being challenged by four-time Republican Congressman Todd Young (‘A’ NRA rating). According to electionprojection.com, Bayh was leading Young by 4.6 percent in statewide polls on Oct. 27. While still close, most project this to be a victory for gun-control and Democrats.

Wisconsin: Incumbent Republican Sen. Ron Johnson (‘A’ NRA rating) is facing a stiff challenge from former Senator and ultra-liberal Democrat Russ Feingold (‘F’ NRA rating). By all accounts and polls, Feingold is significant ahead in what is projected to be a victory for gun-control and Democrats.

New Hampshire: Republican incumbent Kelly Ayotte (‘A’ NRA rating) is in a tough race with former Governor Maggie Hassan (‘D’ NRA rating). According to RealClear Politics, there is no clear indication which candidate could win this race with some polls showing Ayotte up by 1 and 6 points and another fixing Hassan up 9 and then another showing the race tied.

North Carolina: Republican incumbent Richard Burr (‘A+’ NRA rating) was clinging to a 2.8-point lead over Democratic challenger Deborah Ross (‘F’ NRA rating), according to RealClear Politics on Oct. 25. The fact that this is as close as it is is scary in a traditional Red State is scary, although Burr should retain his seat in what should be a victory for gun rights and the GOP.

Missouri: Republican incumbent Sen Roy Blunt (‘A’ NRA rating) is in yet another stiff race in a traditional Republican state in his re-election bid against Democrat Jason Kander (‘F’ NRA rating). According to RealClear Politics on Oct. 27, Blunt was lading by just 1 point, meaning this is another race that could go either way on Nov. 8.

Nevada: Three-term Republican Congressman Joe Heck (‘A’ NRA rating) and Democrat Catherine Cortez-Masto (‘C’ NRA rating) are seeking the seat being vacated by retiring Senate Minority Leader Harry Reid (‘B’ NRA rating). Polls are all over the place in the race, with an NBC/Marist poll on Oct. 26 showing Heck up 7 points and Cortez Masto up by 1 in an Oct. 25 Las Vegas Review-Journal poll. If Cortez Masto wins, it could be yet another surprising victory for gun control and the Democrats in a traditional Republican, gun-friendly state.

— Republicans may be on verge of losing U.S. Senate majority: aides

— Will Republicans lose the Senate majority?

— A Republican Senate Loss Is Looking More and More Likely

— Ten Senate seats most likely to flip in November elections

Results from a Gallup research survey released on Oct. 26. found that 61 percent of respondents said they are “against” a ban on “assault weapons,” a 10-point increase since the last time the poll was taken and an all-time high since Gallup began asking the question in 1996.

As Liz Shield of PJ Media writes in her Oct. 27 article on the poll results, “‘Assault weapons’ is a made-up word used to frighten the public into thinking that military-esque automatic machine guns and rocket launchers are littering the streets of America” when, in fact, the “assault weapons” being targeted are simply semi-automatics that look “scary.”

According to Stephen Gutowski of the Washington Free Beacon, the Gallup survey — conducted between Oct 5-9 with responses from 1,017 adults — found 76 percent oppose banning civilian ownership of handguns, a 4-point increase from last year and an all-time high in the 57 years the question has been asked.

Gutowski notes that the poll showed only 27 percent support for a ban on handgun ownership, a 3-point drop from 2015. It also shows support for an assault weapons ban at 36 percent, an 8-point decline from the last time the question was asked.

— Gallup: Support For Assault Weapons Ban At An All-Time Low

California Lt. Gov. Gavin Newsom—a Democratic candidate for Governor in 2018 and ardent Liberal with his sights set for bigger and better things—is leading the push for Proposition 63, a bizarre proposal that would subject ammunition buyers to the same background check requirements as gun buyers in California.

State residents will see Prop 63 on their Nov. 8 ballots. California is one of four states where gun control initiatives will be presented to voters. In Nevada and Maine, voters are being asked to approve strengthening background check requirements for gun sales. In Washington, voters will see a measure to allow a court to take guns away from “potentially” dangerous people.

But no where is there a gun control ballot measure as straightforward strange as Prop 63 in California. It’s not the only question included within Prop 63 — it also includes proposals to report lost or stolen firearms to law enforcement; set up a process for convicted felons to give up their guns; and fully ban magazines that can hold more than 10 rounds of bullets — but it is, by far, the most controversial.

It’s also a darling of its author — none other than Newsom himself — and, in essence, a pre-2018 referendum on his yet not officially announced but blatantly obvious gubernatorial campaign.

Undoubtedly, Newsom was crafty in including the ammunition component with three other measures that, according to polls, enjoy strong support. But it may have been a risky gamble, leading to voters declining the whole package and giving his nascent ambitions a bruised toe before officially stepping onto the path of self-righteous affirmation of his heroic magnificence.

Newsom told the Associated Press that the ballot measure isn’t about taking guns or ammunition away from people who follow the rules, but protecting the public from criminals. Of course, until anyone with ammunition and firearms in the same place at the same time becomes a criminal.

It’s sheer nonsense, Craig DeLuz, spokesman for the Stop 63 campaign and a lobbyist for the Firearms Policy Coalition in Sacramento, told the AP.

Until a law makes them not law-abiding citizens.

— Guns and Ammo Restrictions on the Ballot in 4 States

— My view: Question 1 in Nevada’s ballot is unnecessary gun control

— Guns And Politics In New Mexico

The suit, filed Oct. 5, maintains the state’s handgun licensing process is lengthy, expensive and invasive because it requires people to submit fingerprints to get a handgun license.

In a press release issued by Maryland Shall Issue, the group claims these requirements create obstacles that block residents from exercising their right to buy a handgun, and few people have the time, money and understanding to navigate the bureaucracies.

“That result is wrong and simply cannot be meekly accepted without a fight. That fight is now on,” the group said.

These requirements were imposed when the Maryland Legislature adopted the Firearm Safety Act, which also bans 45 ‘assault weapons’ and magazines of more than 10-rounds. The measure forced firearms maker Beretta moving some operations out of the state.

According to Chris Eger of Guns.com, under Firearm Safety Act guidelines, the Maryland State Police collect a $17 fingerprint fee, $18 to check state criminal records, a $14.50 charge to do the same for federal criminal records, and a $50 application fee. Also required is costs associated with the mandatory four-hour firearms safety course.

The lawsuit claims, “The underlying intent and practical effect of these requirements is the disenfranchisement of Second Amendment rights for the poor and disadvantaged who may be concentrated in such urban areas and who may lack the means to travel to rural areas for live fire instruction,” according to court documents.