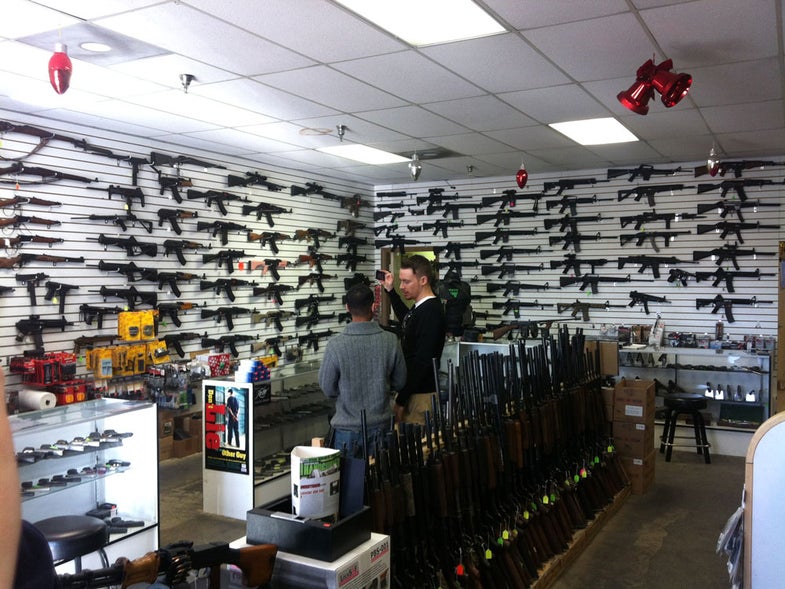 “The Obama administration demonstrated time and again a disturbing willingness to bypass the separation of powers and disregard Congress as a Constitutional watchdog,” Strange said in a statement. “Had the restrictions faced by lawful gun dealers in border states been applied to Alabama, many sportsmen, myself included, would have a difficult time practicing our hobby, and exercising our Constitutional rights.”

BATFE requires multiple sales of certain semi-automatic rifles greater than .22 caliber, and capable of accepting a detachable magazine, be reported if two or more are sold to the same individual during any five consecutive business days.

Gun industry trade groups opposed the data collection since it was imposed in August 2011, notes Guns.com’s Chris Eger in a June 23 blog, pointing out that even after the BATFE inspected more than 2,000 FFLs in Texas and Arizona in 2011, no violations were uncovered.

The border state regulation was designed to gather intelligence to prevent gun trafficking into Mexico, according to BATFE and the Obama Administration. It was upheld by a federal court in 2014 after New Mexico FFL holders challenged the requirement, claiming the Gun Control Act of 1968 only requires tracking of multiple handgun sales.

Meanwhile, a group calling itself the Law Enforcement Coalition for Common Sense, has launched a lobbying effort to oppose “lax gun laws,” particularly the proposed Hearing Protection Act (HR 367), which proposes to lift restrictions on suppressors by eliminating a $200 transfer tax, and pre-empting state or local laws that regulate the accessory.

The Hearing Protection Act is part of the Sportsmen’s Heritage and Recreational Enhancement Act (SHARE Act) and was scheduled for a hearing before the House Committee on Natural Resources on June 14. That hearing was delayed when House Majority Whip Steve Scalise (R-La.) and four others were shot and wounded by bitter ideologue James Hodgkinson at the GOP baseball team’s practice that same day in Alexandria, Va. That hearing has not been rescheduled.

The shooting prompted a number of Congressional lawmakers to file bills allowing U.S. senators and representatives to carry personal firearms regardless of local ordinances, or proposing to preempt the District of Columbia’s stringent anti-gun laws. Among them is Rep. Brian Babin’s (R-Texas) bill introduced on June 20 that will allow Congressional members to “supersede” concealed carry laws and have a gun with them for self-defense “in nearly every conceivable scenario.”

AWR Hawkins writes on Brietbart.com on June 21 that the sudden interest in the right to carry among Congressional Republicans would “empower politicians while not helping all Americans.”

— Lawmakers offer bills giving them gun rights in every state

The Pew Research Center released a survey on June 22 that claimed 89 percent of those polled said they support measures to limit access to firearms for people with mental illness.

That would mean, apparently, about 11 percent of those polled by Pew are fine with allowing those diagnosed as mentally ill to have unfettered access to firearms.

Someday, someone should do a survey to find out who, exactly, is being polled in these surveys.

According to Pew, it surveyed 3,930 adults, including 1,269 gun owners, in March and April. In a statement, Pew said the results of the poll provide “a snapshot of American views on guns and gun policies as the nation grapples with gun violence.”

And that “snapshot” presents a conflicted and complex mosaic. Overall, according to Pew, there is a “sharp drop in overall support for gun control” compared to similar polls in 2000 “despite common ground on some key issues.”

— Americans have long had a complex relationship with guns.

The sheriff’s department in Colorado’s Weld County, about an hour northeast of Denver, launched a three-day course on June 20 to train public school educators on how to use firearms properly, and also how to use trauma kits and tourniquets for those injured by knives or gunshots.

According to KRDO TV in Colorado Springs, at least 17 teachers attended the course, with 20 more reportedly on the waiting list for the next training session.

Coloradans for Civil Liberties (CLC) and the Independence Institute raised the money to cover the $1,000 cost per teacher for the three-day seminar. An Ohio firearms training group, Faster, arranged for the course through the Weld County Sheriff’s Office.

Faster was founded after the 2012 Sandy Hook Elementary shooting in Connecticut to train teachers in weapons and tactics to prevent future similar shootings. The organization coordinates with local law enforcement to train the teachers.

According to Faster, many participating schools keep their involvement in the training program secret to give them an edge of any potential attackers. But Ronnie Wilson of Falcon, Colo., told KRDO that he is starting a charter school with 700 students attending next fall and wants to be prepared for the eventuality of trouble.

“I’m here to learn everything I can about school safety and security,” Wilson told KRDO. “Crisis management is important. You have to ready for when something happens, not if. I don’t know how parents feel about it, but I know they expect a response to any threat against their kids.”

— Path to tougher gun controls may lead through states, not D.C.

The Michigan Court of Appeals ruled June 21 that the University of Michigan will be allowed to keep its ban on guns on campus, standing against the recent court and legislative rulings that have limited or eliminated similar bans.

An appeal to the State Supreme Court is “looking probable,” Steven Dulan, the attorney who represented plaintiff and Ann Arbor resident Joshua Wade, told the Associated Press. In his appeal, Wade argued that the university is not a “sensitive place” because it is “not a school as that word is commonly understood.”

The appeals court affirmed a lower court’s ruling, 2-1, dismissing Wade’s complaint against a 2001 University of Michigan ordinance prohibiting firearms on university property for students, staff and the general public.

Judge Mark Cavanagh, writing for the majority, said the U.S. Supreme Court, in its 2008 decision in District of Columbia v. Heller, which declared Washington, D.C.’s handgun ban unconstitutional, noted that “nothing in our opinion should be taken to cast doubt on longstanding prohibitions on … laws forbidding the carrying of firearms in sensitive places such as schools and government buildings …”

In dissent, Judge David Sawyer argued the university’s ban was preempted from regulating firearms under the provisions of state law in areas of the university that are open to the public.

“I leave for another case the questions of defendant’s authority to regulate the possession of firearms by its students or employees, or in areas in which the general public are prohibited access,” Sawyer wrote.

The opinion was released the same day the Michigan House of Representatives passed a bill to allow the concealed carry of firearms in Michigan, without the need for a permit. The state Senate has not voted on the bill yet.

— Cotterell: It’s the principle, not the money, in FSU gun case