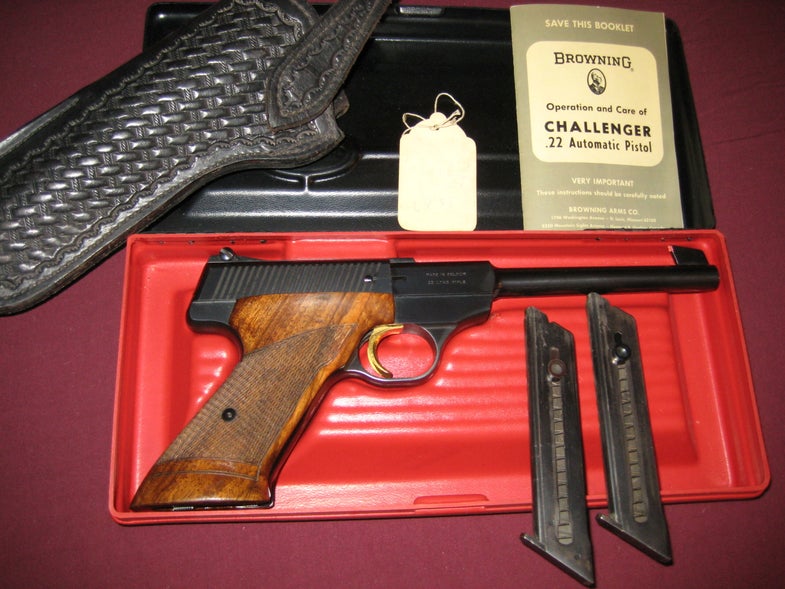 Hudson, an adviser in President-elect Donald Trump’s “Second Amendment Coalition,” introduced a similar national reciprocity bill in 2015. The 2017 version, however, recognizes the Constitutional right to carry concealed firearms without a permit in national parks and on other federal lands, including the National Wildlife Refuge System.

Despite garnering 216 co-sponsors, the 2015 bill never make it onto the floor for a vote. Hudson’s 2017 bill already has 58 co-sponsors and the support of President-elect Trump, who has said he’d sign it into law if Congress passes it.

The bill would guarantee concealed carry permit holders the right to have a gun outside their home state, as long as the person carrying the gun abides by local laws. The bill, Hudson told Anna Douglas of McClatchy Newspapers, will ensure “our Second Amendment right doesn’t disappear when we cross state lines.”

The National Rifle Association on Jan. 4 issued a statement supporting Hudson’s proposal, saying it eliminates confusion among varying state laws while ensuring states can still determine where and how concealed guns can be carried. The bill retains prohibitions for certain people under federal law already barred from buying or carrying a gun.

Bob Owens of Bearing Arms wrote on Jan. 4 that while he supports Hudson’s national reciprocity bill, he has “very mixed feelings” about the proposal.

“While I’d be thrilled that I’d no longer be disarmed and treated like a second class citizen when I visit my friends in the Northeast (other than needing to acquire some ‘NY legal’ downloaded magazines, and another few boxes of Federal Guard Dog 9mm to get around New Jersey’s ignorant ban on hollow-point ammunition), I frankly am opposed to federal gun laws,” he writes. “All of them.”

— The Good and Bad Of The Concealed Carry Reciprocity Act

— Going Into New Year, Gun Rights Advocates Have MAJOR Reasons To Cheer, And Not Just In US

Violent crime in Chicago has descended to horrific depths with the city confirming in early January that it logged a record 762 homicides in 2016. The staggering toll spurred President-elect Donald Trump to tweet, ”If Mayor (Rahm Emanuel) can’t (stop the violence) he must ask for Federal help!”

Trump was not specific in what, exactly, “federal help” the crime-wracked city should ask for, but Adam Collins, Emanuel’s deputy press secretary, responded to the Trumpweet by saying Chicago is eager to work with the Trump administration on public safety. He also offered a few ideas, such as “funding summer jobs and prevention programming for at-risk youth, by holding the criminals who break our gun laws accountable for their crimes, by passing meaningful gun laws, and by building on the partnerships our police have with federal law enforcement.”

Maybe some of those suggestions are good ideas. But, as usual, nonsense soon ensued with gun control zealots blaming everyone and everything for criminal violence but violent criminals themselves. Almost by rote, gun control knee-jerkers called for tighter gun restrictions in a city where draconian gun laws make it all but impossible for anyone but criminals to own firearms, urged Illinois legislators to address “lax” state gun laws, and demanded neighboring states adopt the same prohibitive gun control laws that don’t work in their city.

In fact, according to such pundits as German Lopez of Vox.com, Chicago’s criminal violence shouldn’t be blamed on Chicago’s violent criminals, but on Indiana. Yes, violent crime in Chicago is Indiana’s fault because Indiana has “loose” gun laws.

This long-repeated, staid, thoughtless blather has been long-refuted while the body count mounts. Sane goes with the claim that, somehow, criminal violence in Chicago is a product of Illinois’ “lax” gun laws. The truth is Illinois has some of the nation’s toughest gun laws. According to the Law Center to Prevent Gun Violence, Illinois ranks 8th among the 10 states with the strongest gun laws.

The most common-sense suggestion re-surfaced in a Jan. 4 Chicago Sun-Times editorial, which noted while Chicago’s homicide rate is skyrocketing, New York City’s murder rate continues to decline. In 2016, there were 335 murders in NYC, 56 percent fewer than in Chicago, despite being a city with three times the population of Chicago.

Among tactics Chicago and Illinois should adopt, The Sun-Times suggests (again) is actually targeting and punishing violent criminals responsible for violent crime.

“Gun offenders in New York State are locked up for a minimum of three-and-a-half years, but the average first-time gun offender in Illinois is detained for less than a year, and repeat offenders serve less than two years,” The Sun-Times notes.

Missouri Rep. Mike Moon (R-Ash Grove) has introduced a proposed bill that would make businesses posting “no guns allowed” signs, or otherwise enforcing a gun-free zone, legally liable if a concealed carry permit holder is injured by an act of violence on the premises.

Moon told The Joplin Globe that the bill — HB 96 — “would cover employees as well as customers,” noting that the law would put the onus on business owners who disarm law-abiding customers and employees on their premises to accept full responsibility for their safety.

According to The Joplin Globe, Moon’s bill would hold private businesses that prohibit guns liable for the safety of anyone who is legally permitted to carry a concealed weapon but is prevented from doing so by the business and who suffers injury or other “compensable” damage in an attack in which the permit holder could theoretically have defended himself if he had been allowed to keep his weapon on him.

Moon said he believes the legislation is necessary because an unarmed concealed carry permit holder has no “promise of success” should he or she be inside a gun-free business when an attack occurs.

A similar law was introduced in Tennessee last year but was eventually adopted in a diluted form, making gun-free businesses only liable if there was “gross negligence or willful or wanton misconduct” in providing “inadequate security” on their part. Also, Texas Sen. Bob Hall (R-Edgewood) said he would sponsor a bill making gun-free businesses liable for “any harm to patrons as a result of being deprived of his or her weapon” but, as of early January, had not formally done so.

— Vermont: Another gun control bill emerges even before Legislature convenes

— Indiana legislation would get rid of required handgun carry permit

Barack Obama’s tenure as the firearms industry’s “salesman-in-chief” during the first seven years of presidency was unchallenged. But in his last year, Obama may have been eclipsed by none other than President-reject Hillary Clinton. The mere threat of the committed gun-grabber in the Oval Office was enough to spur firearms sales to record heights in 2016.

While background checks aren’t necessarily a direct correlation to actual sales, they’re as strong an indicator of relative numbers as is statistically possible to ascertain. They don’t, after all, include the number of guns sold to or given to friends and family which, according to some studies, could add another 20 percent, or nearly 6 million more, transactions to the mix, meaning as many as 34 million firearms were bought and sold in the U.S. in 2016.

According to the FBI, firearms sales hit record levels for 19 months in a row in 2015 and 2016, a streak that came to an end in December with background checks totaling 16 percent less than the previous December, when background checks reached 3.3 million.

With gun rights appearing secure under a Trump Administration, the motivation to buy now while you can may mean an end to boom times for the firearms industry but, of course, the fact that the industry will stay in business is a welcome longterm dividend.