Gun News of the Week: With Congress In Partisan Paralysis, Trump Could Accelerate Federal Judiciary Nominations 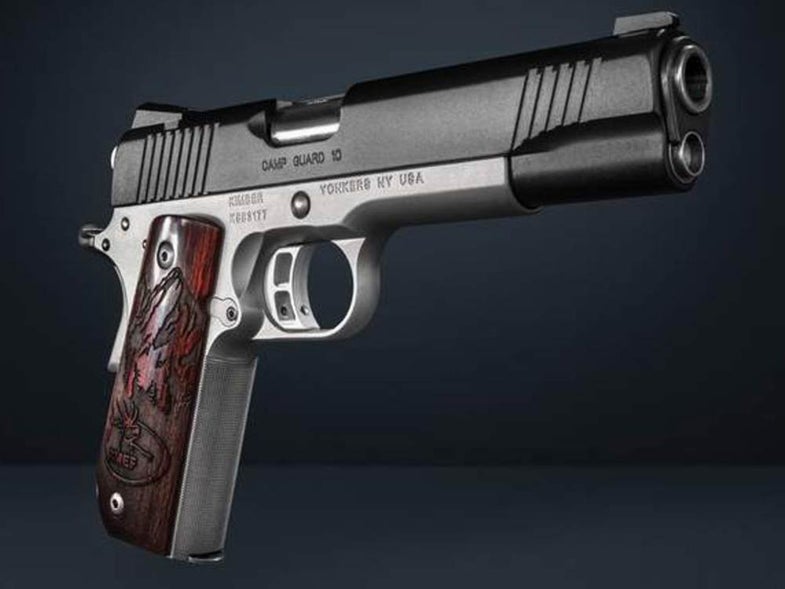 Congress is in a state of partisan paralysis and has been since 2010, passing annual fiscal budgets just four times in the last eight years. Approving a budget is its most important job and it has failed to do that with alarming regularity.

That’s because the House and Senate are stocked with ideological peacocks strutting their “never back down” dancing baloney for TV cameras and on cable network talk shows when the only way a legislature works is through thoughtful, give-and-take compromise. But that takes time and hard work. It is much easier to play a zero-sum game of posturing than it is to actually govern.

Americans have elected—and continue to elect—perpetual candidates seeking reelection rather than representatives willing to equitably resolve complex issues. The only thing worth their time and effort, apparently, is winning the next election.

Congress did virtually nothing in January other than squawk and squabble over the continuing resolution to fund the federal government through Feb. 8. Keep in mind the whole thing would be unnecessary if Congress actually adopted a fiscal year 2018 budget—the continuing resolution extends the FY16 budget—or, for that matter, if the House and Senate could do their jobs and reforge a national immigration policy that has been outdated for decades.

— The Fix NICS Act of 2017 (SB 2135), sponsored by Senate Majority Whip Sen. John Cornyn’s (R-Texas), remains in the Senate Judiciary Committee. The Fix NICS Act has 17 Democratic co-sponsors, 17 Republican co-sponsors, and an independent co-sponsor, Sen. Angus King of Maine, and is expected to pass the chamber when it is put to a vote.

The bill was introduced in November after Air Force veteran Devin Patrick Kelley killed 26 churchgoers in Sutherland Springs, Texas. The Air Force has acknowledged it failed to report Kelley’s 2012 military court convictions for domestic abuse, which would have prohibited him from legally possessing the firearms he used in the shooting. The bill would punish federal agencies — and workers — that fail to upload relevant disqualifying records into the NICS and would grant more money to states that comply.

— HR 4434, The Fix NICS Act of 2017, is the House version of SB 2135. Introduced on Dec. 13 by Rep. Henry Cuellar (D-Texas) and referred to the House Subcommittee on Crime, Terrorism, Homeland Security and Investigations.

— HR 4477, The Fix NICS Act of 2017, introduced by Rep. John Abney Culbertson (R-Texas), which is like SB 2135 and HR 4434 but not the same. It was introduced on Dec. 5 and was placed on the Union Calendar, which schedules hearings on bills involving money issues.

— HR 38, The Concealed Carry Reciprocity Act of 2017, passed by the House on Dec. 7 and referred to the Senate Judiciary Committee. It has been read twice on the Senate floor.

By early January, nine of Trump’s District Court nominees had been confirmed with 44-37 for district court judgeships and seven to the appellate bench—waiting for confirmation.

“Many [nominees] are in the pipeline,” Trump said in October. “We will set records in terms of the number of judges.”

That may new good news worth waiting for, according to Chris W. Cox, executive director of the NRA’s Institute for Legislative Action.

“At any given moment, NRA is involved in numerous federal court cases that run the gamut of issues that affect gun owners, from defending the Right-to-Carry, to protecting gun owners’ due process rights and privacy, to fighting illegitimate restrictions on the use of traditional ammunition,” he writes. “It’s impossible to know all of the federal litigation tomorrow will bring, but by prioritizing filling federal court vacancies, Trump and our Senate friends are helping to put gun rights supporters in a position to succeed for decades to come.”

— Waivers of Gun Rights: A New Shot at Gun Repression

— Gun-free school zones will not protect kids: A painful but honest lesson after last week’s school shooting in Kentucky

— What the Media Doesn’t Want You to Know: Enactment of National Reciprocity is Closer than Ever!

United Nations’ policies are making it increasingly difficult to import firearms and firearms parts from Europe and elsewhere, an international trade specialist says he learned from numerous firms he visited with during the recently concluded 2018 SHOT Show in Las Vegas.

Bromund said a firearms manufacturer that “relies on imports of parts from India” told him it had a multi-million-dollar shipment impounded by the Indian government because ISACS dictated “these parts had to be controlled under a technical definition that India did not understand and which those who did found close to meaningless.”

The U.N.’s Programme of Action to Prevent, Combat and Eradicate the Illicit Trade in Small Arms and Light Weapons in All Its Aspects (PoA) and its 2013 Arms Trade Treaty (ATT) are having disjointed influences on legal firearms exporting and importing, Bromund claims.

Another firm he spoke with at the SHOT Show “imports firearms from southeastern Europe now has only one reliable route off the continent — from Slovenia to Austria to the German port of Hamburg,” he writes. “Many shipping firms departing from European ports will no longer take cargoes of arms — even when all export and transit licenses are in order — and even proper licenses do not always prevent cargoes from being seized en route. These problems began to appear after the ATT, which requires controls on the transit of arms, entered into force.”

With shipping by sea becoming more difficult, Bromund said legitimate firms are turning to air freight, “which offers an easier route for the unscrupulous” — or to other markets for their wares.

“If southeastern Europe does not sell its firearms to the U.S., those arms will find their way to conflicts in Africa or the Middle East,” he writes. “The fact is that the U.N.’s activities are inconveniencing only the legal trade and the most honest firms. Their effect on illicit trade is only to make smuggling more attractive.”

— Beware: the United Nations is taking aim at ammo

— The Gun Industry’s Surprising Take on the Trump Administration

— Australia bids for a bigger piece of the global weapons trade

NYSRPA President Tom King told Albany Times-Union reporter Brendan J. Lyons that his 35,000-member association was encouraged in filing the suit by the 2016 federal appeals court decision that ruled against the District of Columbia’s strict gun control regulations. Like that suit, King said this court challenge seeks to answer one question: Do constitutional rights under the Second Amendment extend beyond the home?

“We’re going to try to get the courts, particularly in New York, to look at the Second Amendment as a right that extends to everybody, no matter where they may be, with some restrictions,” retold Lyons.

Gun owners and civil rights advocates have long been critical of New York’s conceal-carry laws as inconsistent and unfair because its “may issue” protocol leaves a constitutionally guaranteed fundamental individual right a matter of arbitrary discretion by local officials and judges. In some jurisdictions, officials routinely hand out permits for qualified applicants while in other areas, they grant very few. In New York City, conceal-carry permits are very rarely approved and, critics claim, those who do get them there usually have political connections.

“This is something that we’re very serious about,” King said. “We’re prepared to move beyond the (U.S.) Second Circuit Court of Appeals if it’s not a decision in our favor.”

The lawsuit was filed in federal court in Albany by attorney Kathleen McCaffrey Baynes on behalf of Robert Nash, whose application for a conceal-carry permit was rejected two years ago by state Supreme Court Justice Richard C. McNally, Jr., who, along with State Police Superintendent George P. Beach II, are listed as defendants in the lawsuit.

The suit includes Beach, as commander of the State Police and targets the agency because it “is responsible for executing and enforcing New York’s laws and regulations governing the carrying of firearms in public.”

Nash requested a carry permit two years ago in a letter to McNally, who rarely approves such applications. In denying Nash’s permit, McNally said there is no need for private handgun owners to carry their weapon for self-protection in public areas.

“A government restriction that limits the right to bear arms in public for the purpose of self-defense to only those few, favored citizens who can demonstrate that they face a special danger to their life effectively operates as a flat ban on the carrying of firearms by typical law-abiding citizens,” the lawsuit states.

In 2013, Lyon writes that the same federal appeals court struck down a similar challenge to New York’s conceal-carry laws. The U.S. Supreme Court declined a request to review the case, in which five New York residents filed a lawsuit after they had been denied permission to carry handguns in public. State officials said the conceal-carry laws are in line with the Second Amendment, he writes.

— Kansas House passes two gun bills, one on ‘reciprocity,’ the other barring ownership in certain cases

— Washington: A bill before lawmakers would outlaw concealed carry on private property

— New Hampshire: Misfire for bill that would fine cities and towns for regulating firearms

— South Carolina Senate to discuss allowing guns without a permit

The Ohio Supreme Court on Jan. 31 refused to hear Cleveland’s appeal of a May ruling by the state’s Court of Appeals that invalidated several of the city’s gun control ordinances, including a “gun-offender registry.”

The Supreme Court Ohio denied hearing the city’s appeal in reference to the state’s firearm preemption law, adopted in 2006. The law states that the “right to keep and bear arms” is a “fundamental individual right” that is “constitutionally protected in every part of Ohio,” even Cleveland.

The city has been aggressively attempting to undermine the state preemption law, filing an unsuccessful suit in 2010 and, in 2015, enacting a slate of 11 gun control laws designed purposely to flaunt state law.

Among them were city ordinances that created a gun-offender registry and mandated “a duty to notify police if weapons are found on school grounds.”

Cleveland Mayor Frank Jackson said the registry was needed in combating the city’s gun violence. It required those convicted of gun-related crimes to register their firearm with a city database within five days of that conviction or face a separate charge that carried up to six months in jail or a $1,000 fine.

Ohioans For Concealed Carry (OFCC) challenged the constitutionality of the city’s registry, as well as its mandate to call police about guns on school property. In an April 27 opinion released May 3, the Ohio Court of Appeals agreed with the OFCC and ruled state law supersedes local municipalities’ attempts to regulate gun ownership and, therefore, the registry violates state law and is unconstitutional.

The Ohio Supreme Court’s confirmation of that ruling “brings to an end a long-running dispute over the validity of the ordinances and represents a major win for the Buckeye State’s gun owners,” the NRA’s Institute for Legislative Action writes before noting “the political grandstanding by Cleveland’s antigun politicians” is unlikely to end.

Mayor Jackson has already indicated that “corrective language” has proposed for the ordinances, which will likely incur another legal fight that the city’s taxpayers will be forced to pay for.

“That expression of values will now cost Cleveland taxpayer’s dearly,” the NRA ILA continues, “as the city will be responsible for the plaintiffs’ fees and costs in the long-running case.”