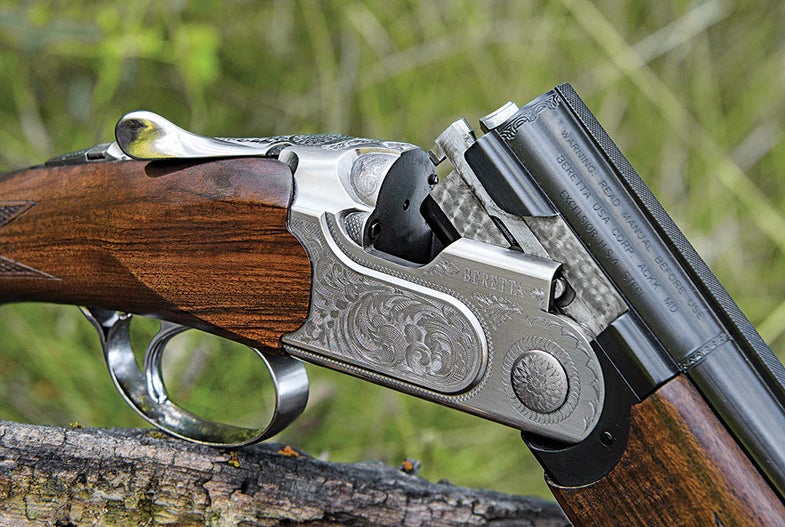 Notable Feature: Pins on either side of the breech face slide into recesses in the recoil lugs on the barrel when the action is closed, forming part of the system that makes the 690 I's lockup so strong. It is a design that will withstand many thousands of rounds. Bill Buckley
SHARE

Just as summer turns to fall, I knew the day would arrive for Beretta to roll out a scaled-down version of its 690 Field I series of shotguns. And as much as I enjoy summer, and have enjoyed shooting the 12-gauge 690, I’ve been looking forward to the 20-gauge version with the same sense of anticipation that any bird hunter has for the first crisp autumn mornings.

The Field designation is no lie. This is a true upland gun from butt to muzzle—and one that will resonate with American hunters.

It is an exceptionally easy gun to carry, a quality that is nearly as important as how a gun shoots for those who stalk expanses of wild grass in search of Huns, or who stomp through cattails for amphibious roosters. My sample weighs 6 pounds 5 ounces and balances just behind the hinge pin in the action. The rounded edges on the receiver let it rest comfortably in hand as your boots churn over the miles.

For now, it is only offered with 28-inch barrels, which is usually a better choice than 26-inch tubes unless you’re one of those demented souls who like to crawl through thickets in search of woodcock.

The barrels are joined by solid side ribs and come with a set of five flush-mounted choke tubes, which are rated for both steel and lead. The metalwork on the barrels is pristine. There is not a hint of an errant ripple or machine mark along their lengths. The bluing is even, dark, and lustrous. The top rib has small vents along its length and is crosshatched to eliminate glare. A simple silver-color bead serves as the front sight.

The receiver has that same silver finish and is adorned with pleasant floral and scrollwork engraving. The deep double fences in the receiver, and the striking contrast between the silver and the blued barrels, make the 690 Field I a head-turner.

The most attractive thing about the receiver in my eyes, however, is the strength of its engineering. The dual locking pins and the broad shoulders on the locking lugs, along with the robust diameter of the hinge, make it as tough as a tank.

The overall balance and handling qualities of the 690 Field I distinguish it from other over/unders. The stock has a gentle pistol grip and a semi-beavertail forend. The dimensions on it fit me as well as a custom-stocked gun.

The gun comes up to the shoulder as deftly as a leopard springing into a tree. One reason for its speed when getting on target is the Micropore recoil pad, which secures the gun firmly in the pocket of the shoulder but doesn’t hang up on clothing. It also cuts down on felt recoil—it’s the best recoil pad on the market.

The combination safety and barrel selector is another well-designed element of the shotgun. The textured surface of the safety is large enough, and gives the thumb such positive traction, that a shooter would have to be really rattled in order to fumble getting the shotgun off safe at the flush. As commonly found on a traditional field gun, the shotgun goes back to safe automatically when the action is broken.

The barrel selector switch toggles side-to-side at the top of the safety and is likewise easy to manipulate, even with gloves on, flicking back and forth in a positive manner. Red and white dots on either side of the switch give a quick visual indication as to which barrel is going to fire first.

Once I got a feel for how quick I could get the 690 in action, I took to shooting rounds of skeet with it, starting the gun in a lazy low position. Its speed is remarkable, and I can’t wait to test it out on wild birds this fall.

As is common with break-action Berettas, the gun was stiff out of the box, but that’s hardly a bad thing. After a few hundred rounds, I could feel it loosening up a bit. The only mechanical glitch I experienced was with the ejector on the bottom barrel, which got a bit sticky after a prolonged session of busting clays. I gave it a couple drops of oil, and it went back to working as it should. While the geometry of the trigger is also outstanding—it is curved so that the pad of the trigger finger bears evenly across its surface during the trigger pull—the quality and weight of the pull weren’t as polished as I would expect. It has a fair bit of creep, and at 5 pounds it is heavier than I’d prefer.

I really like the quality of the wood on the gun. The walnut has some nice figure to it and a handsome oil finish. The checkering is serviceable, but the diamonds on the forend were not pointed up as nicely as they could have been. Laser checkering—forgive the pun—just doesn’t always cut it. These miscues, small though they might be, cost the gun some points in the value category. At nearly $3,000, a gun like this should be damn near perfect.

Still, this is a wonderful little bird gun. I’d happily prop it on my shoulder as my pointer gets out of the truck and starts to cast about for scent in the dew-laden grass, knowing that when that bird gets up, this high-performance shotgun will tip the odds in my favor.