This old revolver might not be worth much, but it has a story to tell 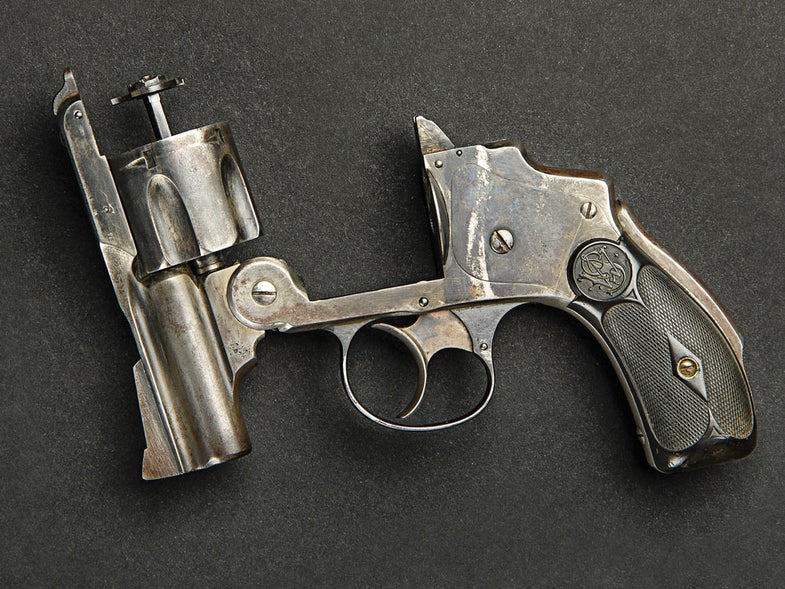 I was sitting at my computer writing when my friend Priscilla came into my office and set this revolver on my desk with a solid thunk. Its splotchy, worn finish showed decades of hard use. “What do you think it’s worth?” she asked.

That’s always a tricky question, value being such a subjective thing. But I knew what she meant: Was the revolver extraordinary or rare, potentially a high-dollar treasure?

I recognized it instantly as a Lemon Squeezer, an iconic revolver made by Smith & Wesson in the late 19th and early 20th centuries, with a hammerless design and a grip safety that one needed to squeeze in order pull the trigger and fire the gun—hence the nickname.

I opened the top latch, tipped the barrel forward, checked the five-shot cylinder, and turned it around in my hand. Something about the revolver seemed odd to me, and it took me a few moments to figure out what. Then I noticed the front sight. It was massive—not at all in keeping with the typical thin-bladed half-moon front sights you see on most handguns of that era.

Looking at the muzzle, I saw the gap between the front sight and the barrel where the two had been joined, and noted the marks left by a file where the barrel had been smoothed a bit after being cut down from some longer length.

“Well, technically, it is junk. Practically worthless to a collector,” I said. A modification like that kills its value to collectors who prize guns that are as close to factory specs as possible. And yet, the revolver intrigued me.

The gunsmithing done to it was brutal. There was no concern for how the converted snub nose would look after the large front sight was added. But whoever made the modification knew what he was doing. He was a gunfighter, or at least knew something about the art of gunfighting.

According to Smith & Wesson historian Roy Jinks, this particular gun—technically a .38 Safety Hammerless Third Model—was shipped from Smith & Wesson on October 10, 1898, to the Simmons Hardware Co. in St. Louis, Missouri. The .38 S&W cartridge is obsolete now, but it enjoyed a long run with police, military, and civilian shooters, first as a blackpowder cartridge when it was introduced in 1877, and later on in the smokeless-powder era.

The modification probably occurred much later than that, perhaps during the Great Depression years in the late 1930s. Why then? Well, following the gangster period of the Roaring Twenties, law enforcement in general, and the FBI in particular, started to take gunfighting more seriously.

One of the key developments was by FBI agent Frank Baughman, who is credited with requesting a large front ramp sight for the then-new S&W Registered .357 Magnum revolver.

The broad sight was easier to see, and the ramp profile helped keep it from hanging up on a holster or clothing when it was drawn quickly from concealment. A handgun equipped this way would be quick to get into action and faster to shoot. We take such notions for granted these days, but during that era this was cutting-edge stuff.

A Safety Hammerless equipped like this would make for a great backup gun or pocket pistol for personal protection.

Read Next: The Rise and Fall of the American Side-by-Side Shotgun

Another possibility occurs to me as well. The gun ended up in Montana, where I live. A revolver like this would have been useful for a trapper needing a reliable arm for dispatching animals caught in his snares or leghold traps.

Of course, I doubt I’ll ever find out the real story behind this wheelgun, but I appreciate knowing that whoever used it—and based on the wear, used it hard—was a savvy pistol shooter and fellow student of the gun.