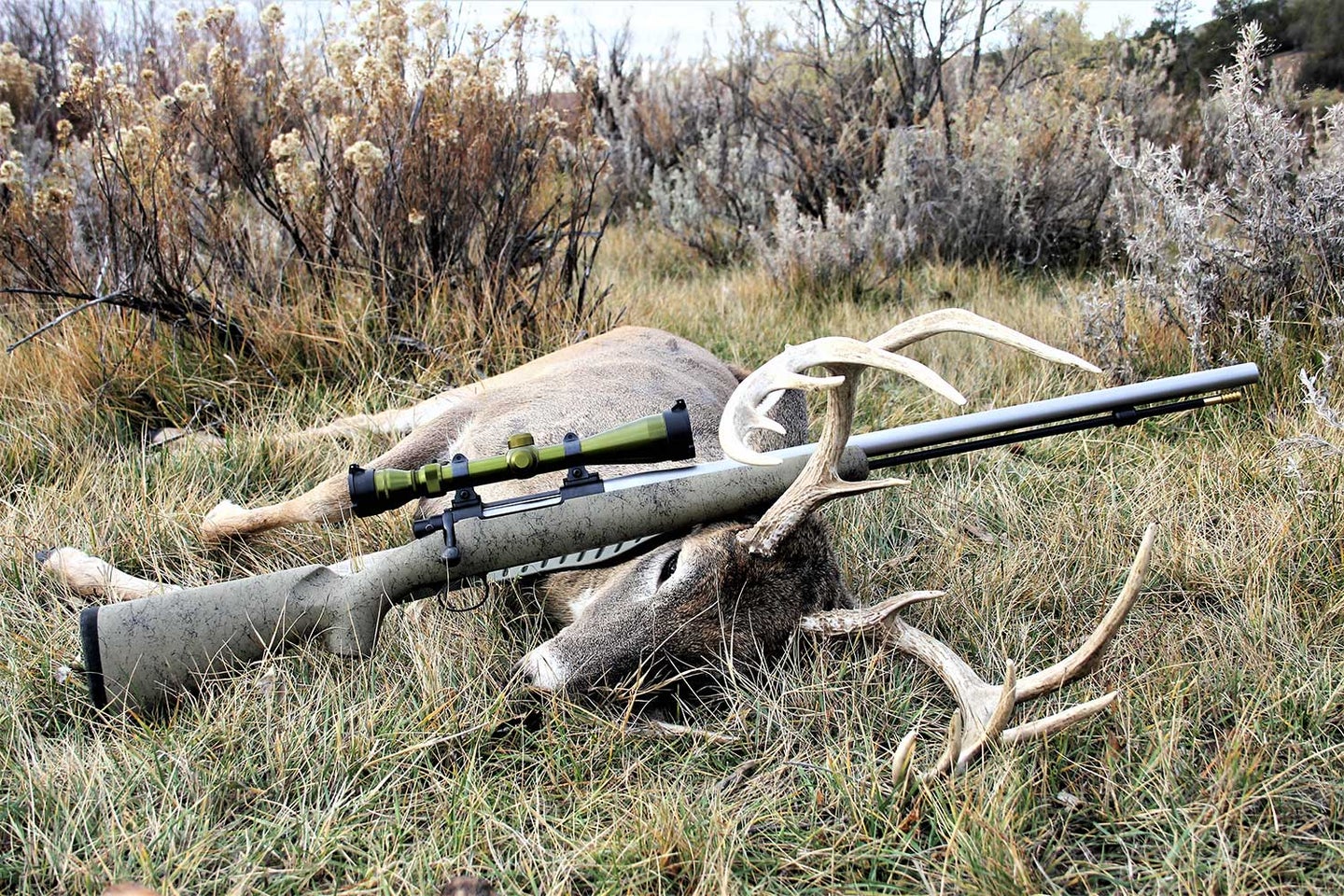 In November of 2016, after six days of hunting, I finally managed to catch up with a very good Montana 12-pointer. After a 100-yard crawl, I rested the forearm of my Cooper Firearms .50 caliber Model 22ML on a cedar fencepost. I had ranged the buck at 223 yards, and I knew that the 120-grain charge of Blackhorn 209 and saboted 300-grain Scorpion PT Gold would drop 12 inches at that distance. I held the crosshair above the facing shoulder and tightened my finger on the trigger. The rifle belched loudly, and that mature, big-bodied buck literally dropped on the spot.

The charge and bullet I was using that day could retain the 800 ft-lbs of energy needed to take down a whitetail out to around 300 yards. As impressive as that may be, there are now quite a few muzzleloading hunters seeking even greater effective range—and some bullet makers have been listening.

Today’s muzzleloading big game hunters are more performance-driven than at any other time in history. Thanks to advanced No. 209 primer ignition systems and extremely energetic black powder substitutes, the current crop of high-performance, in-line rifles are easily capable of producing muzzle velocities of more than 2,000 fps. Many hunters are shooting for 300 yards, and a growing number of hunters are beginning to push game-taking muzzleloader performance to 400 yards.

Achieving that kind of maximum range, however, takes a bullet with a high ballistic coefficient (BC) to retain sufficient velocity (fps) and energy (ft-lbs) past 200 yards. That’s why many hunters are now moving away from shorter-barreled rifle models and the somewhat dated saboted bullets. Here’s a look at a handful of some more advanced saboted bullets with greater aerodynamics and higher BCs.

The Scorpion PT Gold used to make that 223-yard shot has been a stellar performer for me. To prepare for the next level of modern muzzleloader performance, Harvester Muzzleloading has further increased the BC of basically the same bullet by reducing the diameter of the 300-grain PT Gold. The new version is a .430 caliber bullet called the Scorpion White Lightning. To maintain the 300-grain weight, the White Lightning had to be slightly lengthened. Combined, the smaller diameter and longer length increase the BC of this bullet to approximately .290. So, what’s the advantage of adding the .040 to the BC of the bullet?

Shooting that same 120-grain charge of Blackhorn 209 mentioned above, both of these saboted 300-grain bullets will get out of the muzzle of a 26-inch barrel at basically the same approximate 2,020 fps velocity—generating the same approximate 2,720 ft. lbs. of muzzle energy. Once out of the barrel though, the superiority of the longer, .430-caliber White Lightning kicks in. At 100-yards, the slightly shorter and fatter .451-caliber PT Gold retains 1,725 fps and 1,980 ft-lbs of energy, while the new White Lightning will retain approximately 1,785 fps and 2,121 ft-lbs.

It’s hard for any performance-minded modern in-line rifle shooter to look at the CNC all-copper bullets produced by Cutting Edge Bullets and not be impressed. The company offers several selections for today’s muzzleloading hunter, but the one bullet that tends to get most of the attention is their MAXIMUS—which is offered as either a sharp-nosed hollow-point or polymer-tipped spire-point. For .50 caliber in-line rifles, the MAXIMUS bullets are available in .451-inch and .430-inch diameters.

A couple of years back, on the last morning of a mule deer hunt, I decided to take a 3X3 meat buck. I was hunting with a 30-inch barreled CVA Accura V2 LR, which shot superbly with a 120-grain charge of Blackhorn 209 and the saboted .430-inch diameter, 250-grain MAXIMUS spitzer hollow-point.

The buck stood at almost 230 yards. At that distance the retained energy of the bullet would be just over 1,300 ft-lbs. With a 100-yard zero, the bullet drop at 200 yards was right at 9 inches. I put a couple of inches of daylight between the crosshair and the top of the buck’s back and sent the bullet right where it needed to go. At the sound of the bullet hitting its target, the deer dropped where it stood.

But, the high BC .430-inch bullets do have their own drawback. When loading these bullets into a .50 caliber bore, the sleeves or petals of the sabot must be thicker to create a proper fit for the smaller diameter. It takes more velocity (at lease 2000 fps) to force those heavier and stiffer petals open once the bullet is out of the muzzle. The lighter 80- to 100-grain charges of Blackhorn 209, loose grain Triple Seven, or compressed Triple Seven/Pyrodex pellets that many recoil sensitive shooters rely on just can’t get the job done.

Read Next: 7 Steps for Increasing the Range of Your Muzzleloader

Some of the higher BC bullets currently available which will continue to shoot well out of current 1-in-28 twist barrels are produced by Parker Productions, a small bullet-making operation in Lewiston, Idaho. The company’s .451-inch copper-jacketed Ballistic Extreme is offered in three different weights. I took a nice 10-point whitetail buck at 212 yards with one of the 275-grain bullets, putting the deer down pretty much on the spot. The 110-grain charge of FFFg Triple Seven used got the bullet out of a 28-inch barreled .50 T/C Omega at 1,919 fps, with 2,250 ft-lbs At 200 yards, the rifle delivers the bullet with 1,200 ft-lbs. More recently, I shot the bullet with 120 grains of Blackhorn 209, which gets the 275-grain Ballistic Extreme on its way at a snappier 2,033 fps, with 2,522 ft-lbs.

One “saboted bullet” that might become extremely popular over the next couple of years wasn’t even designed to be shot with a sabot. That bullet is the PowerBelt ”bore-sized” .45 caliber Aerotip 280-grain ELR bullet. This “belted” or “skirted” polymer-tipped, electroplated, copper-skinned lead bullet was developed specifically for the high-tech .45 caliber CVA Paramount long-range rifle. The bullet is one of the sleekest muzzleloader bullets ever made. According to CVA and PowerBelt Bullets, this missile has a .335 BC

It has shot so well out of the 1-in-22 twist Paramount that I just had to give it a try with a sabot out of a .50 caliber rifle. The snap-on polymer base also snaps right off. The small bottom center post that holds that base to the bullet can be easily clipped off with a set of wire cutters and the bottom lightly dressed up with a file or 80-grit sandpaper. The bullet then sits right down into a Harvester Muzzleloading red .50 x .45 Crush Rib Sabot. Powered by 120-grains of Blackhorn 209, I’m getting this bullet out of a 30-inch barreled Traditions .50 Vortek StrikerFire LDR at 2,040 fps (with almost 2,590 ft-lbs.). A high percentage of the 100-yard groups shot have gone sub 1-inch. At 200 yards, this load retains velocity in the neighborhood of 1,600 fps, hitting right at 1,600 ft-lbs of knockdown power. At 300 yards the bullet would retain more than 1,000 ft-lbs.

It bears mentioning that all of the .50 caliber rifles mentioned in my testing were built with a barrel featuring a 1-in-28 rifling twist—the same twist introduced by Knight Rifles back in 1987. That rate of twist has been the in-line rifle industry standard for more than 30 years. It is the rate of twist which has made modern in-line ignition rifles so accurate and so effective with equally modern saboted bullets. Unfortunately, that rate of rifling twist could very likely be what’s now holding back in-line rifle performance. The 1-in-28 twist is not fast enough to stabilize a higher BC bullet much longer than the Harvester Muzzleloading 1.095-inch or the .430-inch diameter Scorpion White Lightning. Somewhere around 1.1 inches in length is about all the 1-in-28 twist can stabilize well enough for producing the sub 1-inch, 100-yard groups more and more muzzleloading hunters are now demanding out of their rifle and load.