Why You Should Get a Laser Shotgun Trainer

Hone your shotgun mount and swing by practicing at home 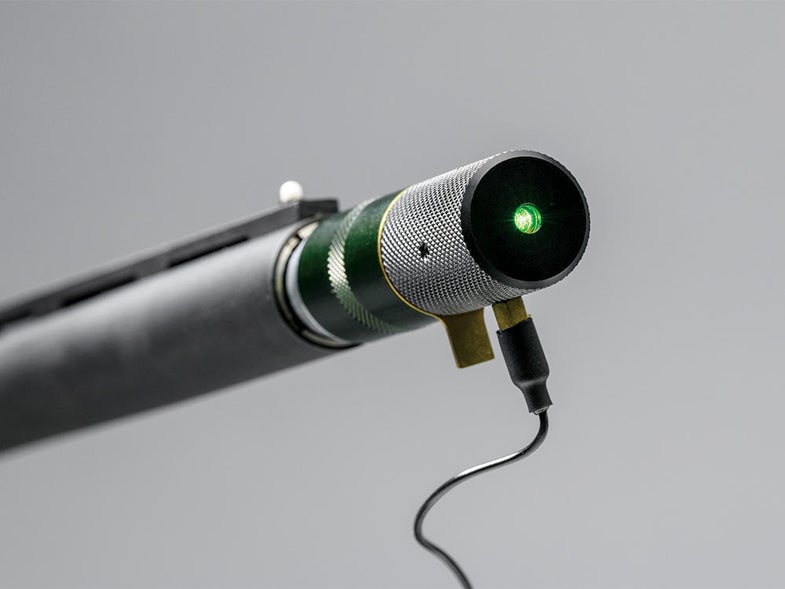 During dreary Montana winters, as the temperature approaches zero, so does my enthusiasm to get out and break clays. I always pay for it come spring with a shotgun mount that feels slightly rusty. But this past winter was different. I got my hands on what’s being billed as the Ultimate Practice Shooting System from Robert Louis Co. This training unit has a couple of different components. There’s a LaserPro box that projects a red laser dot onto a wall—that’s your target. Knobs control the direction, speed, and distance traveled by the dot, and there’s a switch to have the unit “throw” two dots that trail each other to mimic a pair.

The box can be mounted on an oscillating base to add arc to the targets as well.

The other piece is a laser projector that goes in the muzzle of a shotgun. There are gauge-specific inserts, so it can be used with 12s, 20s, 28s, and .410s.

The insert has a wire that connects to a metal band that goes on the trigger finger. When that band touches the shotgun trigger­—assuming it is metal—it completes a circuit and turns on the laser in the muzzle, throwing a green dot where the muzzle is pointed.

By looking at the target and working on your mount and swing, you can see how your shotgun’s muzzle movement and direction line up relative to the target.

I made a point of working with the unit a couple of times a week during the off-season. Once I got on the skeet field again, I could see that it had kept my technique sharp. The system comes with a second insert as well, so two shooters can go head-to-head—though that’s more for fun than for improving technique.

With a disciplined approach to using the system, however, a shotgunner can iron out kinks in their form and avoid a shotgun slump when getting to the range isn’t possible.