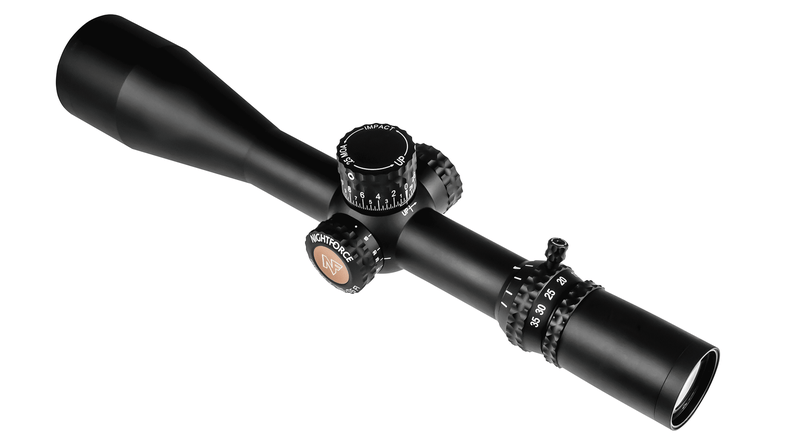 The dominant trend in riflescope introductions this year isn’t new product lines or advances in optics. It’s the arrival of the first-plane reticle in brands’ leading scope lines, including some entry-priced lines. This is clearly a nod to the rise of precision shooting across the landscape, and it’s going to be interesting to see how front-focal-plane reticles either catch on among all shooters and hunters – or don’t. First-plane reticles are, in many senses, much easier to use. Because the reticle’s measurements stay the same size regardless of magnification, they make variable-power optics much more useful than those with second-plane reticles, in which aiming references are generally tuned to the highest magnification. But first-plane systems do take plenty of study to understand the subtensions and dynamics of various aiming points, and plenty of practice to use proficiently. With this year’s crop of riflescopes, we have no excuse for not getting in that practice.

The latest iteration of Leupold’s venerable VX-3 line is intended to be a do-it-all optic for precision shooters on a budget. The LRP in the designation stands for Long Range Precision, and the scope can be configured to the preferences of the shooter. Get it in 4.5-14×50, 6.5-20×50, or 8.5-25×50. Get it with an illuminated first- or second-plane reticle, with the reticle and controls tuned to Mil or MOA, and a wide variety of proven reticle designs in either option, or go for the new Combat Competition Hunter configuration for wide utility. Keep the fast-adjusting throw lever on the magnification ring, or take if off when you don’t need it. The windage cap can be removed and replaced with a weatherproof thread protector if you prefer to run with exposed controls. The elevation dial features three full rotations of travel, and a metal-on-metal zero stop keeps you from losing your zero during a long day on the knobs. The objective lens features Leupold’s Twilight Max coating designed to amplify wavelengths during low-light situations. The best thing about this new VX-3 is the price: $1,100. That’s about half the price of many precision scopes with similar features.

A brand-new optics company, GPO stands for German Precision Optics, and about the only thing German about them is the ownership structure and the design. Products are sourced in Asia, which allows the company to bring products to market at a lower price than optics manufactured in Europe. The company’s Passion line of riflescopes covers the gamut, with the 3x line built on 1-inch tubes and configured for all-around hunting. The 4x line is a 30mm family of cross-over scopes, and the 6x and 8x lines are premium, full-featured short- and medium-range scopes with second-plane reticles that will be at home on ARs, dangerous-game rifles, and 3-Gun rigs. Configurations for the 6x and 8x line range from 5-30×56, 2.6-15×56, and 1-8×24. Prices range from around $400 for the 3x up to $2,000 for the 8x tactical scope, which is the only scope from this new brand that features a first-plane reticle.

This darling of the precision-shooting community gets an upgrade this year, with a brand-new magnification range (7-35x56mm) and even more precise controls. The first-plane scope can be configured with any of three well-regarded Nightforce reticles: the non-illuminated TReMoR3, or the MIL-R or MOAR with illumination. Optics feature Nightforce’s ED glass, but what really separates the ATACR line is the precision of its controls, from its durable zero-stop and positive turrets to its parallax focus, which can bring critical resolution to the most distant targets. The scope, built on a beefy 34mm tube, will cost around $3,000.

Finally, Leica’s most elegant riflescope is coming to the United States. The Magnus has been a fixture of the European market for a number of years, but patent issues prevented its appearance in the U.S. until this year. Dangerous-game hunters will appreciate the configuration and controls of the 1-6.3×24, while the 1.5-10×42 should find favor with big-game hunters looking for an elegant low-profile scope. The 1.8-12×50 is a versatile scope for a wide range of shooting and hunting purposes. All scopes are built on a 30mm tube and feature center-dot illuminated reticles, either in the German 4, plex, or ballistic configurations. The illumination is turned off when the scope is turned vertical – thereby saving battery life – and then switches on automatically when the scope returns to horizontal. Prices will vary depending on configuration and turret controls, but expect to pay as much as $3,000.

This full-featured 30mm scope can nimbly cross from precision-target work to hunting situations with ease. The second-plane system accommodates a number of illuminated reticle options, including the crossover MOA Milling Hunter, along with Sig’s Hellfire metric milling reticle and the Hellfire .25 MOA reticle, all with 50 MOA of travel along both the windage and elevation axes. Shooters can customize their own free SBT ballistic turret, and the Tactical Hunter turret system features a push-button locking mechanism and a resettable zero stop; in all cases, turret click values are .25MOA. In keeping with Sig’s “electro-optics” brand expression, the Whiskey5 features a digital Levelplex anti-cant system that uses lights inside the optic to signal left-to-right cant to within a half a degree of level. Cost will be about $1,600 for the 5-25×56 when this optic is available later this year.

Vortex has tweaked a couple of its lines to appeal to tactical and precision shooters. Its 1-inch second-plane Diamondback scope is being dressed up with tactical features – namely, exposed turrets – and marketed to entry-level shooters. Expect to see these on shelves for as low as $400. Meanwhile, Vortex’s highly regarded Viper line is being fitted with first-plane reticles with MOA and MRAD references and re-engineered turrets and controls. You’ll see the new first-plane Viper in 5-25×50, 3-15×44, and 2-10×32. Cost will range from around $1,000 to up to $1,400 for the 50mm configurations.

Bushnell has tweaked its Elite line of first focal-plane riflescopes, offering illumination of its versatile G3 reticle in its LRTS family, and adding illumination and a new configuration to its DMRII line (look for a lower-case i to indicate illumination). The exciting dimension of the scope is just that – its dimension. At less than 13 inches in length, the 3.5-21x50mm scope offers plenty of short-range utility on a variety of platforms, including AR carbines. But with a magnification range that tops out at 21x, the 34mm optic has plenty of power to reach out for distant targets on a precision rifle. The DMR is available with either the G3 reticle (with an option to illuminate) or the unilluminated Horus H-59. Look for the illuminated version of the DMR to cost around $1,500.

This scope was actually introduced at last year’s SHOT Show, but because it is a harbinger of a trend that fully matured this year, it’s worth including in this roundup. There’s nothing particularly interesting about this scope – that’s one of the hazards of being a pioneer; you play it just a little safe – except that the brand’s highly regarded Monarch 3 platform was converted to a first-plane reticle, and that Nikon retained its stacked-circles BDC reticle and Spot On Ballistic Program. Both elements were pioneered in second-plane generations of the Monarch, but Nikon has done a good job of educating consumers that first-plane reticles don’t need to be bristling with MOA and MRAD references in order to be useful aiming tools. A precision scope this is not, but it’s a solid entry-level scope for a hunter who likes to reach out and play with first-plane dynamics. The best configuration for this Monarch is probably the 4-16×50, which costs about $625.