From high-end autoloaders to affordable double guns to shorty home-defense guns, there’s a little something for every shotgunner this year

The shotgun world is plenty diverse, and you’ll see that when you scroll through our roundup of new guns from the SHOT Show. There were two obvious shotgun trends this year. The first, is that gunmakers are rolling out waterfowl-specific guns. That means Cerakote, enlarged controls, and more recoil reduction padding. The second trend is the boom in shorty guns. Now, from a legal definition, these shorties aren’t actually “shotguns” because they aren’t designed to be fired from the shoulder. These guns do not require a special tax stamp to own. (You can read more about that here.) But these shorty guns fire a shotshell and have standard shotgun actions, so we’re including them here. We’ll cover the standard shotguns first, then get to the shorty guns at the end of the round up.

Here’s the first of our waterfowl-specific guns. There’s a select group of waterfowlers who prefer to shoot a double gun (because it won’t jam, no matter how cold it gets, and who really needs that third shot anyway?), and Browning is targeting those guys with this introduction. This over-under has a burnt-bronze camo finish on the receiver and a burnt-bronze finish on the barrels. The stock is nice and grippy, has plenty of padding, and an adjustable comb. The gun comes with three choke tubes (F, M, IC) and has a great ivory bead up front. It’s available in Realtree Max-5, Mossy Oak Shadow Grass Blades, and Mossy Oak Bottomland (shown here, because I think it’s the one that looks the coolest). Browning says there will be limited availability on this gun, so if you just have to have it, act quickly. MSRP: $2,340 —Alex Robinson

Don’t worry, not all the duck guns on this list are going to cost two grand. Meet the Stoeger M3500 Waterfowl. This 3.5-inch inertia-driven gun checks all the boxes: enlarged safety, bolt release, and bolt handle, plus a Cerakote finish and camo options on the stock. But this gun is noteworthy because it brings all these features for an MSRP of $849. Plus, it comes with a cool paracord sling and five extended choke tubes. As Field & Stream’s shotguns editor Phil Bourjaily pointed out, it’s a Stoeger that doesn’t look like a Stoeger. —A.R. 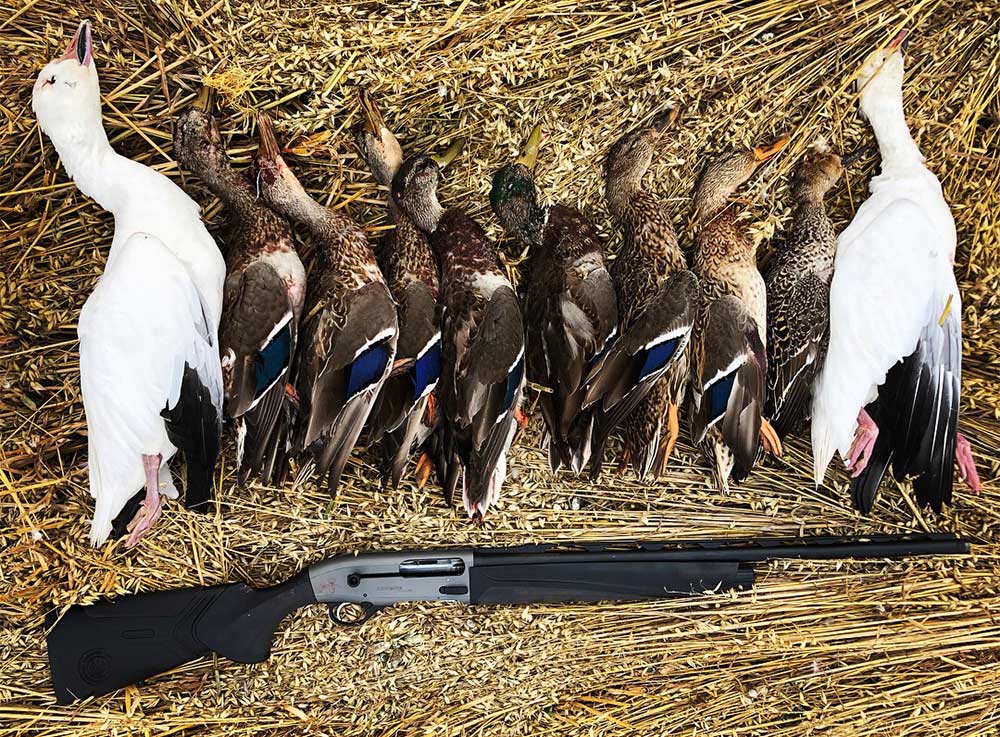 Beretta A400 Xtreme Plus

Beretta A400 Xtreme Plus

I kicked off my fall waterfowl season up in Alberta with Beretta’s A400 Xtreme Plus, and I couldn’t find a single thing to knock it for. My gun cycled without a hitch all three days of our hunt, and held up to my less-than-delicate treatment of it. This model isn’t cheap, but if you’re a diehard who wants a waterfowl gun that both nods to the competition sector and withstands a beating, you might consider making the investment. This is Beretta’s first hunting shotgun that they’ve outfitted with their Steelium Plus barrel. Continuing on that vein, they topped the barrel with a step rib that includes an integral mid-bead and fiber optic front bead. The receiver boasts the trendy extended charging handle and bolt release, along with an enlarged loading port for better shell stuffing in inclement weather. The gun comes in six finishes. Black synthetic will run you $1,750, while the camo options (Mossy Oak Bottomland, Max 5, Kryptek Yeti, Realtree Timber, and True Timber DRT) are all $1,900 apiece. —Natalie Krebs

One of the most expensive guns in this roundup is a duck gun. If you shoot ducks and geese with an old 870 pump and like it that way, then just skip this entry. But if cost is no concern, then you’ll want to look closely into this sweet autoloader from Benelli’s performance shop. The barrel is Cerakoted, which looks cool and protects the gun in any weather. In a first for the SBE, this shotgun has a lengthened forcing cone which Benelli says will reduce felt recoil and shoot better patterns. Like the other duck guns in our lineup, it has a larger bolt handle, and a large bolt release (but this one is hinged). Even when you are you are shooting in frigid weather, it’ll be impossible to miss this release. The shotgun also comes with Rob Roberts chokes. And for the haters out there, the company eliminated it’s “Benelli Click” (though they never called it that) with improvements to the SBE3 a couple years ago. —A.R.

Here’s a semi-auto duck gun that comes in somewhere between the SBE Performance Shop and the Stoeger M3500. Which is where Franchi has made its name: mid-priced, reliable shotguns that bring nice features for the money. Like the other waterfowl-specific guns, the barrel is Cerakoted and it has larger controls so it’s easier to run in cold weather when birds are migrating. For all you Sitka fans, the shotgun is available in Optifade Waterfowl Timber or Optifade Waterfowl Marsh. It comes standard with three chokes, but you can upgrade to a package of six extended chokes (C, IC, M, IM, F, XFT) if you want more options. MSRP is $1,419 or you can get the 3-inch version (because shooting 3.5s is for suckers) for $1,249. —A.R.

Among all the tactical beards and camouflage, serious upland bird hunters sometimes seem like an endangered species at the SHOT Show. But the ones I talked to were all interested in CZ’s revitalized side-by-side: The Bobwhite G2. The barrels are finished in black chrome (so it’s more weather resistant than the old blued barrels), it has an English-style straight grip, and double triggers. It’s available in 12, 20, and 28 gauge. The best part? The MSRP starts at a very reasonable $655. *—A.R. *

Turkey season is only a few months away, so when I saw this bad boy hanging on a shelf in the Remington booth, I had to stop and check it out. This is a compact V3 with a 22-inch barrel and an overall length 41.75 inches. It comes with a Tru-Glo red dot sight that arrives from the factory bore sighted at 40 yards. It also comes with a Tru-Glo headbanger choke. Like the duck guns earlier in this round up, the Turkey Pro has oversized controls and lots of camo (Realtree Timber). Best of all, this gun is made in America. MSRP: $1195 *—A.R. *

The SX4 is a sweet shooting, hardworking gun that comes in at a great value. In 2017, the 12-gauge version of this shotgun won the Great Buy award of our shotgun test. Now, finally, Winchester is offering a 20-gauge version. It will come in 10 different models including black synthetic, wood, and a variety of camo patterns, all chambered in 3-inch. The 20 gauge is slightly more expensive than the 12 gauges, but with an MSRP starting at $940, it’s still a bargain for an unstoppable autoloader. —A.R.

The Benelli changed the game of over/under shotguns with the original 828U, their first-ever o/u. The company rolled out a whole new action that uses a moveable breech face that locks into the rear of the monoblock. This seals in shot pressure and takes the stress off the rest of the frame. Benelli simply calls this their “Lock Plate.” The sport version uses this same action, but packed into a competition package. The shotgun has a crazy amount of features, some of which include an all-steel receiver (which makes it heavier), a carbon fiber rib (designed to be anti-glare), and a wonderfully crisp trigger. The Benelli rep told me there are some 40 shim options for it. Also, there’s a balancing system in the buttstock that allows you to move weights within the stock to find your perfect balance in the gun. MSRP: $4,399 —A.R.

Read Next: The Best new Guns and Hunting Gear From SHOT Show 2019

The new Mossberg 590 Nightstick is a variant of the popular 590 Shockwave. On the new Nightstick, the Raptor (bird’s head) rounded grip is made of wood, as is the corncob fore-end. The fore-end also carries a leather strap loop instead of a nylon one, which keeps your hand in place (with a 14.3-inch barrel, you don’t want your fingers to slip forward). The strap also helps the user control muzzle flip. This 12-gauge sports a 5+1 shell capacity (with 2¾-inch shells), a thick-walled cylinder bore barrel, and 26.37-inch overall length. MSRP: $539 —Tom McHale

Unlike most of these shorties, the V3 TAC-13 is a semi-automatic. What? Yes, semi-automatics might be the biggest shorty shotgun innovation this year. The VersaPort gas bleeds energy from the system to cycle the action, ejecting the spent shell and cycling in a new one. This also helps reduce recoil. With a 26.5-inch overall length and weight of just 5.94 pounds, that’s no small consideration. The V3 TAC-13 accommodates both 2 ¾ and 3-inch shells and holds 5+1. Just like a traditional shotgun, this one includes a sighting rail that extends along the length of the 13-inch barrel and a sighing bead on top of the muzzle. MSRP: $915 —T.M. 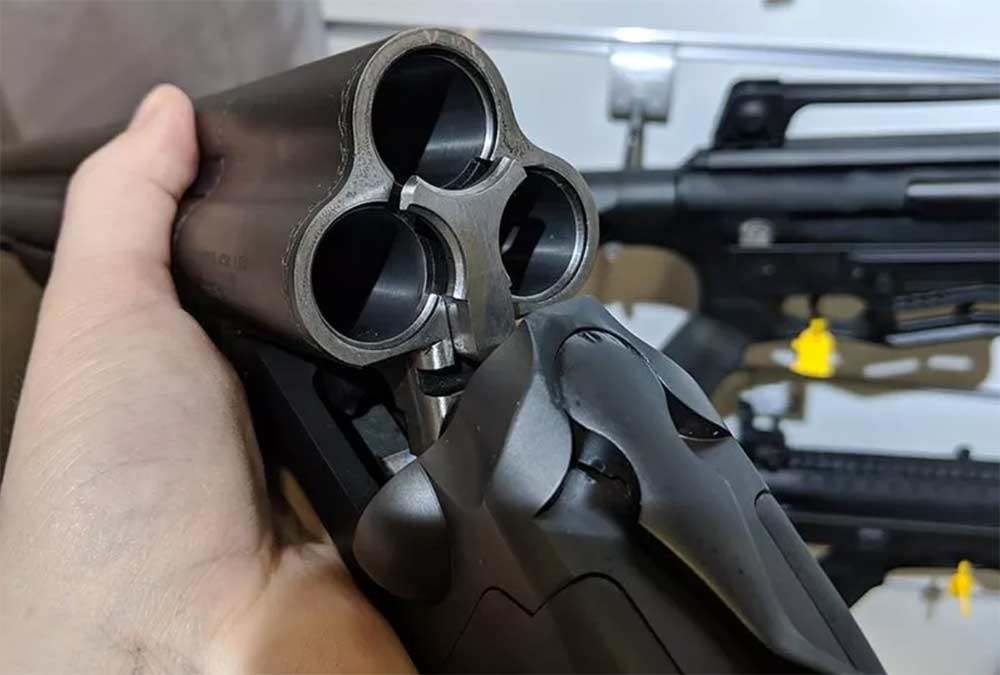 As the name implies, this is a double barrel plus one. This gun welds three smooth cylinder bore barrels together in a triangular shape: two side-by-side with one stacked in the center. The barrels are longer than pump and semi-automatic alternatives because the break-action means no lengthy receiver is required. Pump and semi-automatic designs require horizontal space to move shells back and forth into the chamber. With this model, the shells are already in the chamber, so there’s no overall length penalty with this gun’s 18.5-inch barrels. The whole package measures just 27 inches. If you want less beast to tame than the 12-gauge model offers, you can also order this one in .410 bore. MSRP: $1,299 —T.M.