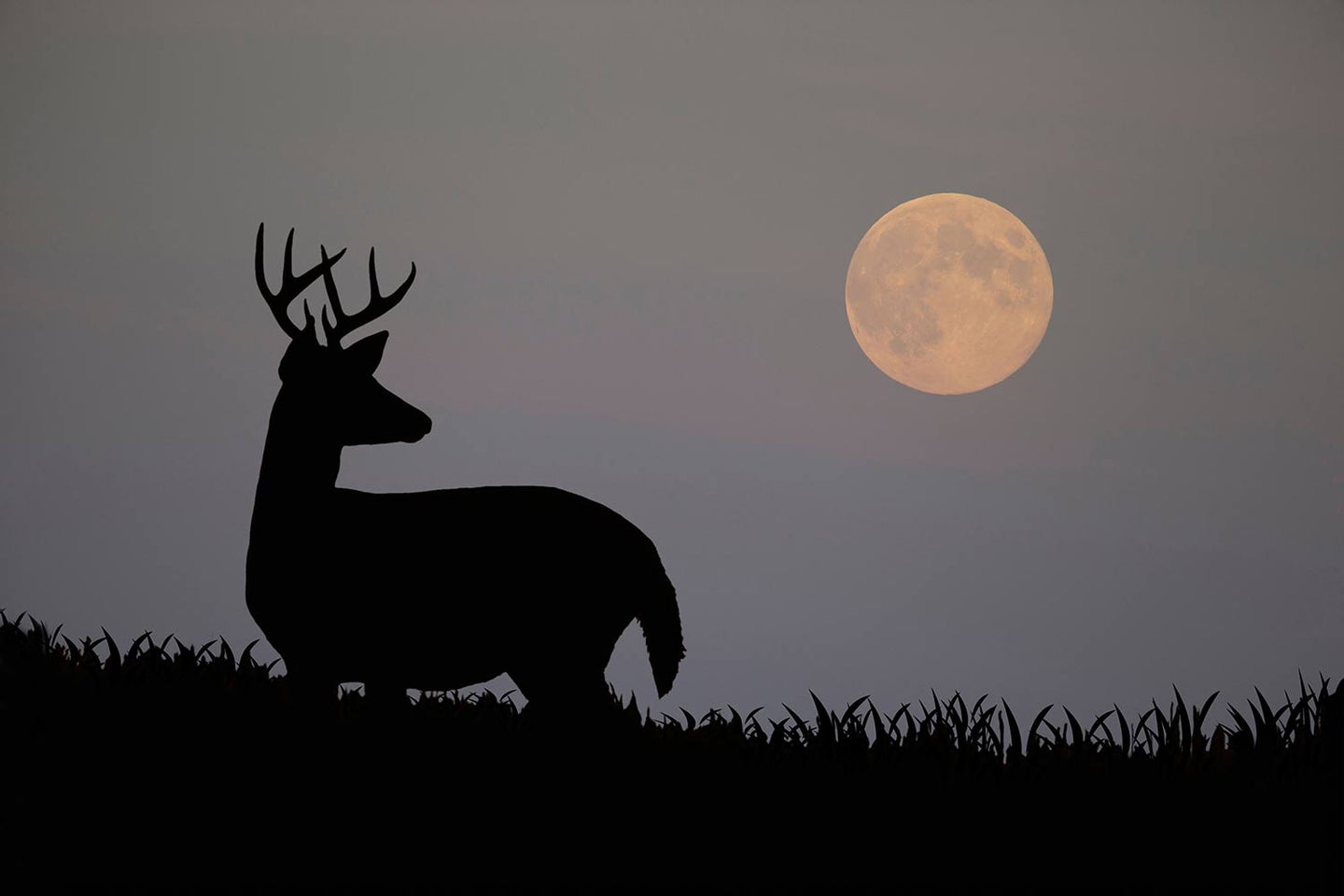 A Midwest buck on the move under a full moon. Neal Mishler / Alamy Stock Photo
SHARE

Multiple scientific studies of whitetail deer have established historical rut activity charts that illustrate one important fact: In any given year, from North Carolina to Kansas to western Canada, 90 percent of all adult does will come into estrous and be bred from approximately November 5 to 20, regardless of moon phase, weather, or other environmental conditions.

It’s been that way for decades and will continue to be that way. So, if you take off work any time from Halloween through Thanksgiving, you’ll be hunting some phase of the rut.

I do believe, however, that some days and weeks are better to hunt than others each year and it’s largely dependent on the moon phases that occur in late October through November. I base this on two things. One, more than 30 years of hunting and observing bucks across North America each fall as they seek, chase, and breed does. Two, I read and analyze all the moon-related deer research I can get my hands on, and continually compare that data to my field notes.

One study of the moon and its effects on whitetail movement was conducted by researchers at North Carolina State University and published in 2010. Researchers tracked GPS-collared deer throughout the four lunar phases of late October and November, and analyzed text messages sent from those collars to determine when the animals moved most—and least.

For the past 8 years I have cross-referenced that study’s findings with my ongoing field notes and theories, and have found some interesting common ground.

Which leads to our predictions on when might be the best days and times for you to hunt rutting bucks this fall.

The NC State study confirmed one fact we already know: Whitetails are crepuscular, which means that they are most active at dawn and dusk, regardless of time of year or moon phase.

“That fact does not change,” says researcher Marcus Lashley, who headed the study. “But the intensity of movement in each period does change.”

During the new moon this rut cycle, which begins on October 27 and stays mostly dark through the first days of November, you can expect deer to be most active at dawn and for 30 minutes thereafter.

“In our study, we saw a large peak of movement at daylight during the new moon, and below average activity the rest of the day,” says Lashley.

This unequivocally jibes with my notes and experience. I love bowhunting Halloween and the first days of November, when bucks scrape and prowl hard, but before most does come into heat. That’s the official kick-off of the rut for me. I hunt mostly timber, on rub-blazed ridges and in funnels with multiple scrapes. When the moon is in its dark phase, I typically see two or three times as many deer on the move in the mornings. It is not uncommon to see a few does and two or three bucks the first hour of daylight, and then only one or two deer or none that afternoon.

If you’re a dedicated bowhunter and take this week off, you will, of course, put in as many hours in a tree stand as possible, because you never know when you’ll encounter a good buck. But with the moon dark and waxing crescent, expect deer to be move mostly from daylight until 9 a.m. or so, this year especially if temperatures in your area are seasonal. Get on stand extra early and hunt especially hard that first hour.

An important note about the temperature here. No matter which week you take off, no matter the rut phase or the moon period, your hunting will always be better when temperatures are normal or, better yet, slightly cooler than normal. We’re not telling you something you don’t already know, but we’re just reiterating that point. On days when it’s five to 10 degrees warmer than normal, you will undeniably see fewer deer on their feet in daylight hours.

If you have the flexibility to wait until late October to plan your rut-hunting week (maybe you’re the boss man or you have a great boss), do it. Study the long-range weather forecast, pick a cool to cold week when bucks will move and factor in the moon advice you read here for a killer game plan.

The NC State study found that during the first-quarter, when the moon is 90 degrees away from the sun and is half-illuminated, deer move less on average throughout the day than during all the other phases.

“That would be a good seven days to work,” says Lashley.

This is where I’ll part ways with the science, at least for this year’s rut. Looking back on my notes and all the research I’ve done over the years, it is fact that many huge bucks are killed every year during the seeking phase of the rut November 6 to 10. This is always a good week to take off work and hunt.

Read Next: No-Excuses Guide to Hunting the Rut

Before every deer season, I reach out to my friend and outdoor TV personality Mark Drury, who is a moon fanatic like me. “What do you think about the moon this year?” I ask.

While Mark’s favorite time to hunt the rut is during the full moon in November (more on that later) he also loves the three to four days prior as the moon waxes toward full.

“The weekend of November 8 to 10 should be excellent this year, especially if you get cold weather in your area,” he says, adding to focus on the afternoons. “I think your best shot to see a mature buck looking for a hot doe is from around about 1 to 5 p.m. Watch your best food source.”

From our preseason skull sessions and texts back and forth from tree stands each season, Drury and I keep honing our new theory: Mature bucks rut and move best in daylight hours in and around the full moon that shines high in the sky in November. We understand this flies in the face of what many of you have read and believe—that bucks move all night during the big moon, and therefore it is a poor time to hunt.

But I know we’re on to something, because the more I hunt during the full moon in November across the U.S. and Canada, the more mature bucks I see wandering around the woods, or chasing does, any time of day. Drury agrees, and that’s what he sees as he hunts giants in the Midwest. We are not scientists so we can’t give you hard data, we just know what we see and like—bucks on the move during the full moon in November.

Lashley’s findings back us up, at least somewhat.

Read Next: 3 Ways the Pros Use the Moon to Kill Big Bucks

“A common misconception is that deer can see better at night because it’s brighter when the moon is full,” he says. “But according to our data they actually move less on average at night during a full moon and more during the middle of the day, and also earlier in the evenings.”

There you go, that supports Drury’s advice to hunt hard in the afternoons beginning November 8, and keep it up throughout the full moon.

“I think anytime from November 8 through 16 could be good for midday deer movement, especially if it’s cold,” says Drury. “Movement from, say, 10 a.m. till 3 p.m. will be sporadic and unpredictable, especially as bucks lock down and breed with does about November 14.”

Late November can be an unpredictable time to hunt any season. The breeding is winding down, and bucks have been pressured for two months. Simple math says there are fewer bucks in the woods because some were harvested earlier in the season.

But if this is the only week you can get off work, there’s hope. From a moon perspective, the deer movement should be good to great from November 19 through about 24, especially around food sources, according to the North Carolina study. The researchers say that if you are going to hunt the last hour of the day anytime this season, you should do it during the last-quarter phase “because that was the most extreme deer movement we saw during the entire study.”

Try this. Set an afternoon stand in a secluded, thick funnel that leads out to a crop field where you know some does are feeding. A skittish, worn-down buck is still ready and willing to breed any last doe that will give him half a chance. You might get him yet as he sneaks out to check for does in the last wisps of light.

So when to plan your hunting vacay?

If you hunt anywhere in the Midwest, we predict you could not go wrong from November 8 through 14, give or take a few days. If you hunt in the Mid-Atlantic or Northeast, or out in Nebraska, Wyoming or Montana where the peak of the rut occurs later in November, we recommend you start your hunt the weekend of November 15. You’ll catch the last of the prime full-moon days and then be out there as the moon wanes to last-quarter, when overall deer movement is typically best of the season.