How to Cut Your Own Feathers for Survival Arrow Fletchings 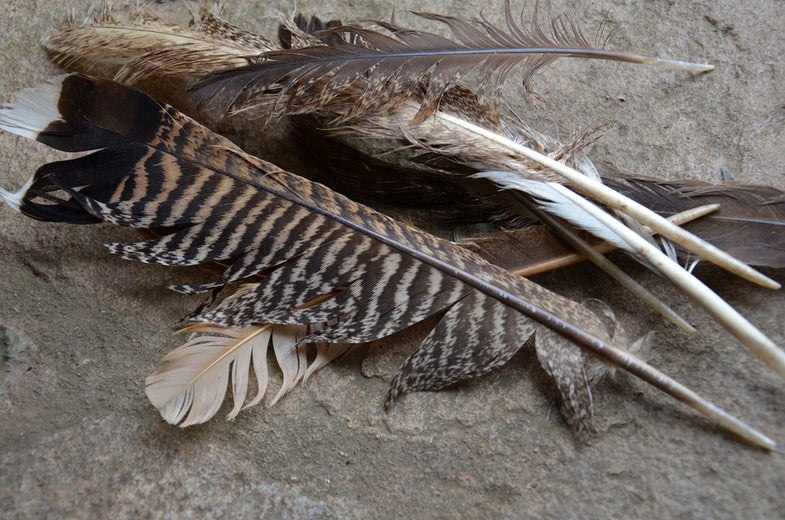 If there’s anything weirder in pre-history than an arrow, I don’t know what it is. You’ve taken a stick, and affixed a sharp point to it. This looks like a mini-spear but that’s not the strange part. When one of our craftier ancestors decided to make it fly through the air, by placing feathers at the end, this amalgam of wood, stone, string, glue, and feathers took its place on the list of game changing—yet bizarre—early technologies. I can’t help but wonder, did our forbears think that feathers made things fly? Is that why they stuck some on the end of a projectile? They weren’t wrong, though they may have come to the point through childlike thinking that feathers were somehow magical and allowed flight. We’ll never know for sure what they thought, but we can follow in their footsteps and put meat over the fire by cutting feathers into survival arrow fletchings. Follow along.

1. Gather some bird feathers and match them up. At the very real risk of sounding political, you have to keep the right wing feathers and left wing feathers separated. They don’t have to be same color or even from the same bird, but the curves must match. Don’t mix and match right & left, or wing & tail feathers on the same arrow, as these feathers all have different shapes. **

2. Pick a feather from the pile, and clip off the end of the quill (with a knife or scissors). Then split them in half by slicing down the quill lengthwise with a sharp blade (a razor blade is great for this).

3. Reduce and even out the quill side of the feather piece. Trim it with a sharp tool, and sand the bottom flat with sandpaper. Make the front edge of the fletching very thin, while leaving the rest of the quill at a medium thickness.

4. Cut your fletching to length and shape. For arrows, you can shorten the fletchings to 4 or 5 inches (11 to 13cm) long and about 1/2 inch (1cm) wide. You may even get two fletchings per side from a long feather like goose or turkey (great choices, BTW).

5. Space two or three fletchings equally around the nock end of the arrow shaft and glue them into place. I’m a fan of super glue for this. It’s not very traditional, but it’s quick and it lasts a good while. For added strength, secure the feathers both with glue and with the same kind of cord you’d use for attaching arrowheads. And knuckle shooters be warned! Make sure the front of the fletching is smooth and covered with enough string and glue so that the sharp ends of the feather quills aren’t poking out. This can cause a serious scratch on your hand as the arrow passes over your skin.

Do you shoot traditional archery and fletch your own arrows? Please let us know by leaving a comment.