How to Find Every Turkey You Shoot 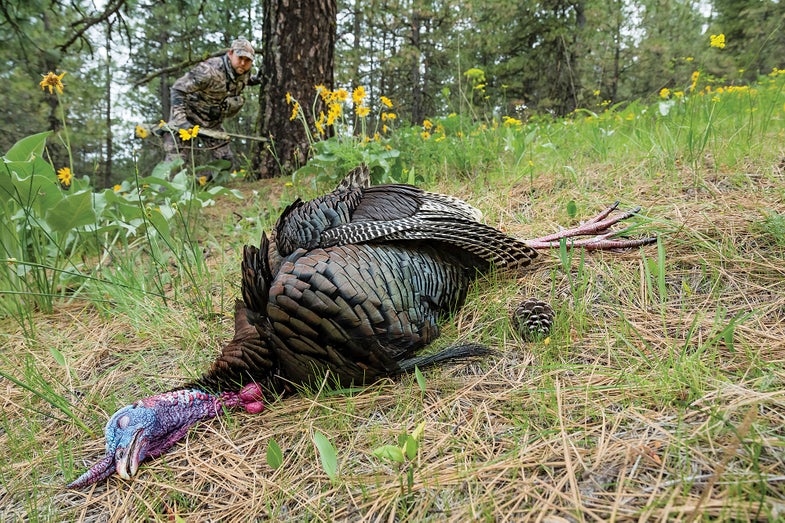 Dave Streb’s impish grin told the tale. My buddy, Billy White, and I heard Streb shoot but arrived on the scene only to discover a gobbler-less field. “I don’t know what happened,” Streb said. “Wait, I take that back, I know exactly what happened—I missed.” I listened closely to Streb’s sorry tale.

Meanwhile, White walked to where Streb told us the bird had been standing.

Indeed there were—not a ripped-open-pillowcase pile, but enough to make a trail. We hadn’t gone 30 yards when White announced an update. “We’ve got a bird,” he said. “He’s right here.”

A quick coup de grâce ended what could have been a needle-in-a-haystack search. Streb had his bird. Wounded turkey follow-ups rarely end this well. The birds are perfectly capable of brushing off non-vital hits. And sometimes even when they’re hit well, they manage to fly or scramble off, leaving very few clues behind. Do not give up too soon, though. Whether you’re hunting with a bow or a shotgun, you can improve your odds for recovery by playing it smart.

There was a time when I’d try to beat the shotshell wad to a flopping turkey. Heck, it’s what all the experts told me to do. Not anymore­—and it has nothing to do with my lack of fleet-footedness. Experience has taught me to watch, wait, and listen for a minute or two after pulling the trigger. If I’ve done my part correctly, the bird will be down for good. Besides, if I wasn’t able to hit him solidly while he was standing still a few yards in front of my gun barrel, I’m not likely to hit him as he’s making his escape.

Nowadays I hold tight to my tree, checking for clues with both my eyes and, more importantly, my ears. If the turkey is not dead and manages to regain his wits, I want the see the precise direction in which he flees. If he flies, I want to hear him do so. Often, mortally wounded turkeys prove capable of gaining wing, but then they audibly crash against a tree trunk or out of a treetop once they run out of steam.

Being patient can pay the biggest dividend, especially if you’ve been fortunate enough to capture the hunt on video. Replay what just transpired either on camera or in your head. Did you rock the bird hard? Did you roll the bird? How did the gobbler react after the shot? Unlike deer, wounded turkeys will not leave a lot of helpful sign behind, so you’re left with reading their body language. Train yourself to concentrate through the trigger squeeze and you can learn a lot. If, at the shot, the bird hops into the air, lands, and then scampers off, you may have shot low. If he seems to have ducked at the shot, you may have shot high.

There is a time to get on your feet and hurry to your bird. If you’ve rolled him and he is flopping off, check your gun’s safety and move to the bird swiftly but attentively. If in doubt, don’t hesitate to finish the bird off—it’s your job as an ethical hunter. Do it from your setup tree if possible, but if he’s headed out of effective range, you’ll need to close the distance.

A feathered trail can point you in the right direction, and on rare occasions you might even be able to follow the feathers, or a blood trail, to a downed bird. “It happened to me in Texas a few years ago,” says Streb. “I rolled a gobbler at about 25 yards, but then he flushed. I heard him crash, and when I got to the spot, I saw some feathers and blood. I followed the trail like you would a wounded deer trail—slowly, on hands and knees a few times. I flushed him twice more before I got close enough to shoot him again.”

There’s no doubt that Streb got lucky, but if you’re certain that you’ve hit a bird, you’ve got to pull out all the stops. Follow the feathers or look for blood, turned-up leaves, and even tracks.

When you’ve got no clues, it’s pretty difficult to solve the case—but not always impossible. Birds that leave on foot are infinitely easier to find than flushers. Mark the spot where you last saw the bird or found the last bit of sign and start hunting—hard. Mortally hit birds can burrow deep into thick cover. They’ll hide in brush piles, briar patches, root wads, and downed timber. Pick the woods apart with your eyes and your hands if necessary. The bird that Billy White found, for example, was lying in a thick tangle of blueberry bushes. Had White not been moving deliberately through the tangles, he would never have seen the bird.

Where legal, nothing beats a bird dog’s nose when you’re searching for a wounded turkey. But think the situation through carefully before racing back to camp for your Lab. If there are other hunters in the area, for example, they won’t appreciate the intrusion. If it’s an area that you intend to hunt again, know that you risk boogering the birds in that spot for a few days.

There’s less chance of running into other hunters—or spooking birds—if you wait until at least midmorning to take up the search and do it with a leashed dog. Know, too, that all game wardens have a reasonable side. They may allow you to take your bird dog in to look for a bird that you’ve hit. In this case, though, it’s always important to ask for permission before forgiveness. Call the warden first.