How to Make Your Own Lighted Nock

This DIY nock is easy to make and only costs about $3.50 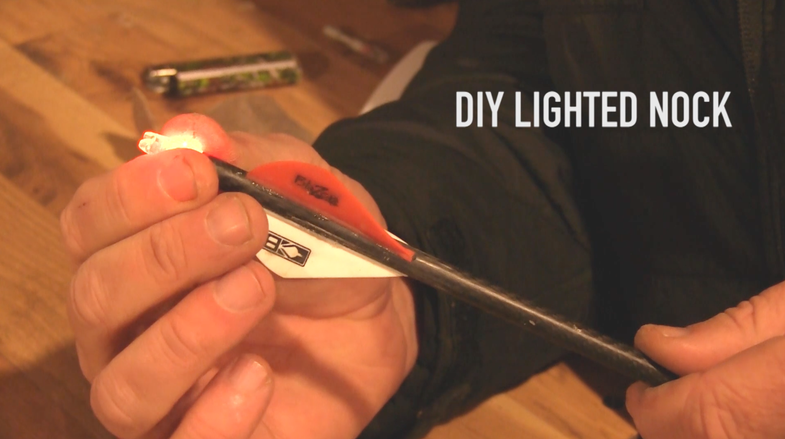 I can rattle off a number of valid, high-value reasons that bowhunters should use nothing but lighted nocks in the field. Knowing exactly where your arrow hit is at the top of that list.

Conversely, I can think of only a single reason why someone wouldn’t use a lighted nock: Cost. A single lighted nock from top manufacturers will set you back anywhere from $8 to $12. Sure, there are plenty of knock-off versions littered across eBay and Amazon that cost significantly less. But, as with all things, you often get what you pay for and the user-submitted reviews indicate hit-or-miss reliability on many of them.

What if you could have a solid, reliable lighted nock for about $3 each? You can. And because you assemble the nock yourself, you know what components were used and have some level of quality control over the final product. Here’s a step-by-step tutorial to do just that.

PICK YOUR NOCK: There are too many arrow options to go into a deep dive here. First, determine what size nock your arrows use. To power the nock, we’ll be using 435 pin-type lithium batteries. These will slide inside of every arrow shaft I’ve tested – including the micro-diameter options (I’ve personally fit them inside VAP Elites and Easton A/C/C shafts). But the fit inside of nocks varies widely. You’ll need to test-fit your nock choice and determine what modifications might be in order. Clear nocks are preferred for maximum brightness. You’ll need two nocks for each finished lighted version.

LIGHT IT UP: The light source is a basic bobber light. These feature a single 3mm LED light powered by the 435 battery. They work on a plunger system. Push the light in to light. Pull it back to turn off. In the video, I’m using a Carbon Express Maxima arrow shaft. The light fits perfectly inside the nock so no modification was needed. For other nock styles, you may need to enlarge the opening to accommodate the light. I can’t cover modifications for every nock type here but most nocks can be modified to accept the light. A little super glue is employed to hold the light in place. Be careful here. You only want the glue to adhere to the top portion only. If it gets down below the light and onto the battery, that will keep the light from being able to “plunge” thus eliminating its ability to turn on and off.

CUT IT: With the light secured into the nock, take a second nock and cut it roughly in half. You’ll take the insert portion of the nock and glue it to the bottom of the battery. This will then slide into the arrow shaft and, ultimately, serve as the stopper. This will be explained more in the next step.

INSERT IT: As long as the lower barrel of the nock fits snugly, you can now simply insert the nock into the arrow shaft. Test the plunger function to ensure the light works. If all is well, you’re done and ready to shoot. If needed, you can add a little 5-minute epoxy to the lower portion of the nock to secure it and keep it from moving forward at the shot. That’s it. You’ve just made your own lighted nocks. The final cost is about $3. Thill makes a quality bobber light and they sell for about $4 each.

For the video, I used a less-expensive version I picked up from Amazon for about $2.50 each. Of the 12 in the package, 11 worked fine while one was a little touchy and didn’t always light. I had the clear nocks on hand but those are pretty inexpensive if you need to buy new.

CONSIDERATIONS: The S nock style seems best suited for this DIY job because no modification of the nock is required thus its strength was not compromised (the nocks used in the video are Carbon Express’ Launchpad with a .244 diameter). Of course, the light adds a little weight and the additional lower barrel on the nock adds some weight as well. Make sure to check point of impact compared to a non-lighted nock and adjust as needed. For other nock styles, some modification will be necessary – the most common being drilling out the nock slightly to accommodate the light and battery. Drilling out a nock could impact its strength so be careful and proceed at your own risk. I made my own lighted nocks for my VAP Elite hunting arrows and they work great, but fairly significant modification was required of the nock.