How Handheld Shot Timers Can Make You a Better Shooter

Improve your handgun skills by racing the clock 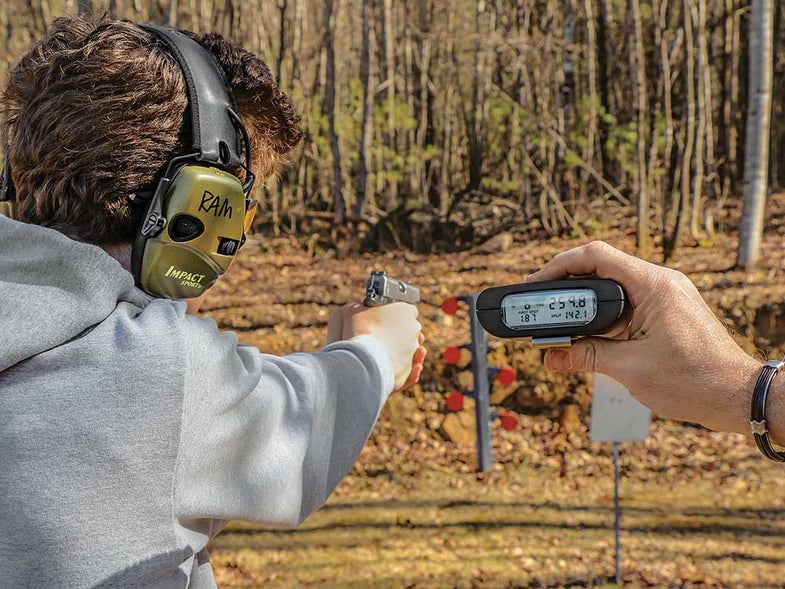 If you’re shooting combat-style pistol matches or competing in 3-Gun, you’re not only trying to get good hits, you’re trying to get them fast. That devilish device the range master holds in his hand—the one that goes beep—not only signals that it’s time to start shooting, it keeps a time track of every shot you fire. Shot timers sell for about a hundred bucks, and one might be just what you need to get a better score.

In 1982, Ronin Colman, a shooter who attended the very first class held at Gunsite, in 1976, created the PACT Championship Timer. Since then, shot timers have become so trustworthy and prolific, they’re used to decide the outcome of shooting matches worldwide. But shot timers are also used during training because they’re more user-friendly than stop watches, and because they can help you learn to shoot and manipulate your firearm faster.

Handgun Presentation
Drawing your handgun from a holster and engaging a target takes time. The amount of time it takes depends on several things, but one thing’s for sure—time spent on a competition stage during which you’re not shooting is time wasted.

To use a shot timer to test and evaluate your draw speed, set the timer so it has a 3-second delay. This gives you time to push the button and prepare to draw. On signal, draw and engage an IPSC-sized target at about 5 yards, and concentrate on getting the hit. Do this 10 times to assess your average time. (Don’t count the times for the efforts where you missed.) Now you’ll have a benchmark to work against the next time you come to the range.

You can also practice handgun presentation during dry practice—practice without ammo—with a timer. Again, set a delay for the start signal, but also set a par time equal to your average. So adjusted, the timer will beep a few seconds after you push the button, and again at the end of your average time.

Your goal is to draw, present the handgun toward the target, align the sights, and dry-fire before you hear the second beep.

Reloading
Time spent reloading during a match is time spent losing the match. Just like with handgun presentation, you can establish your average time to reload your handgun, rifle, or even shotgun. The best way I’ve found to do this is to fire one shot, conduct a reload, and fire a second shot. The shot timer will calculate the split, or time between the two shots, telling you how long it took you to reload. Do this 10 times to establish an average, and then work to beat that average.

And just like with handgun presentation, you can use the par-time function to conduct reloading drills during dry-practice. Set the par time at your average and try to complete your reload between the beeps.

Shot Cadence
Shot cadence, which is nothing more than the time between shots, is something many competitors overlook. It is only applicable when you’re looking at multiple shots on the same target, or at the transition time from one target to another.

Since shot timers allow you to review every shot fired, you can look at the times between your shots to see if you’re shooting consistently. If you’re not, then you might be struggling with sight alignment or even firearm fit. Both can negatively impact shot cadence. If it is consistent, you can work to reduce the time between shots because you know your average.

One thing’s for sure: When it comes to competition shooting, time is the one thing you do not have enough of. Anything you can do to minimize the time its takes you to complete a course of fire, without sacrificing your hits, will help you win.

A shot timer is the only reliable device that will allow you to slow time down enough so you can evaluate how much of it you’re taking. And, the top-end shot timer from PACT even doubles as a chronograph. Why don’t you have one?