Bryan Stamper was on an all-day sit, but saw only one deer: a 190-inch buck 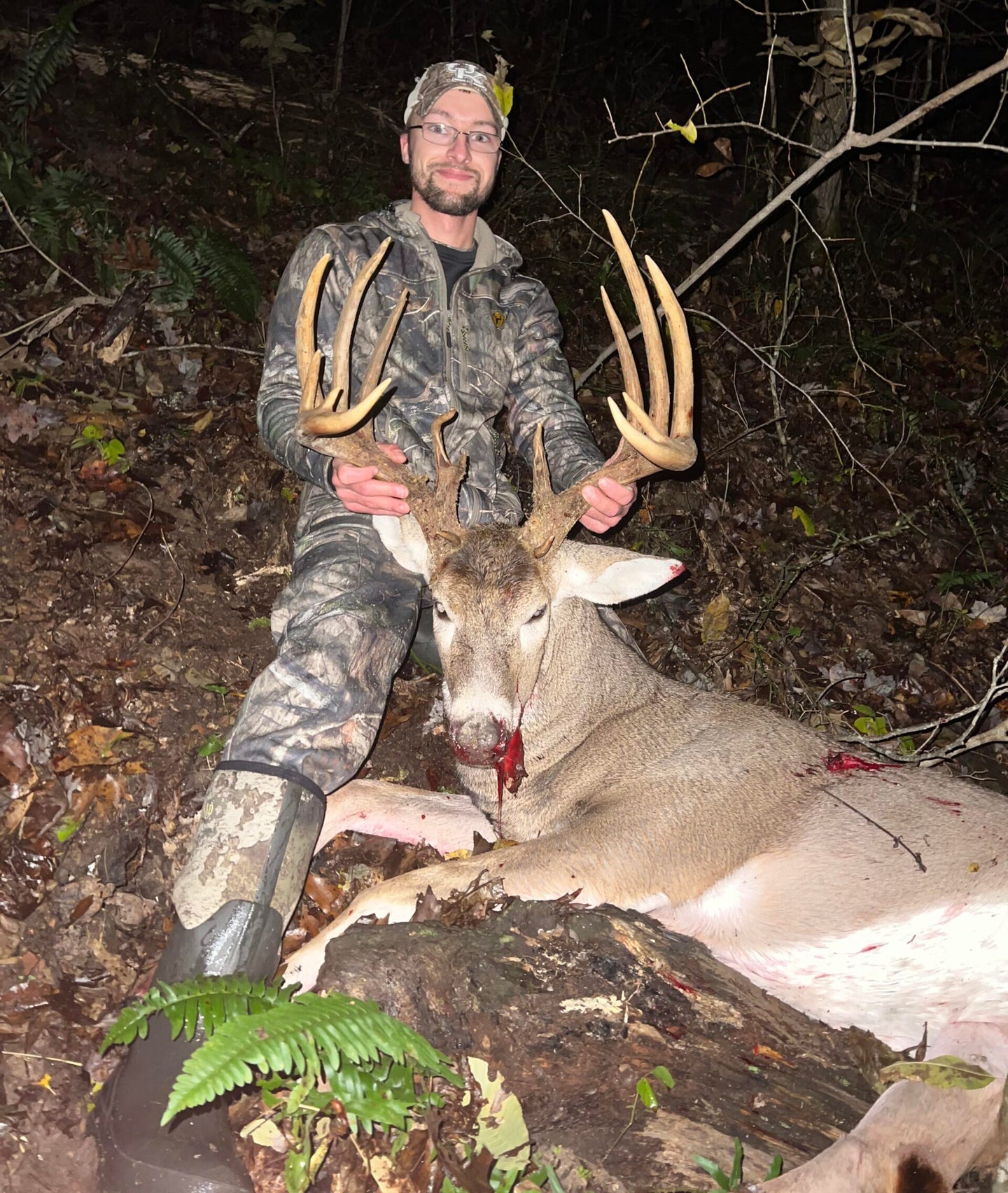 Bryan Stamper was all smiles after catching up to this giant Bluegrass buck. Courtesy Bryan Stamper
SHARE

Bryan Stamper got just one trail camera photo of a giant buck during last season, and he’s been thinking about it ever since. This year, that deer turned into a giant 5 ½-year-old, and Stamper started getting trail camera videos of the buck working scrapes during the last week of October.

His father has hunted this farm in Kentucky for more than 20 years. Stamper has hunted it himself off and on for a dozen years. This season, he used the topo map feature on a hunting app to help him narrow his search for the giant based on his scrapes. Running multiple cameras helped him pinpoint this deer, too.

The weather was cold and wet on Oct. 30. Drizzling rain dampened the air and cloudy skies kept any hint of sun away. A heavy breeze made spotting deer difficult, thanks to the limbs and leaves waving in the wind. Stamper’s stand was in a thick clearcut on the side of a ridge, with briar patches everywhere. He couldn’t see more than 80 yards in any direction.

Still, all the chipmunks running around his stand location kept him entertained. He needed that, especially since he was trying to stay focused for an all-day sit. Because it wasn’t until the last hour or so of daylight that he finally saw a deer. It was one he recognized

“I let out a couple soft grunts,” says Stamper. “A few minutes later, I heard walking. Then, seconds later, I saw the legs. I was talking to myself, telling myself to stay calm, keep my composure, don’t move. At first glance, when I saw legs walking through the thicket, I knew it was a deer. After I saw that it was a buck, I realized that it was him. I just kept telling myself to stay calm.”

The big buck cautiously walked into the open, and after several tense moments, stopped in a shooting lane at just 17 yards. Stamper settled the crosshairs on the buck, flipped the crossbow’s safety, and squeezed the trigger. The buck dashed out of sight.

“They were in shock,” Stamper said of his father, brother, and best friend, who he called after the shot. “At first, they didn’t believe me. After a quick FaceTime call and them seeing me vigorously shaking because I had just shot the biggest deer of my life, they were asking questions. They were asking if I thought I had hit him good and what had happened.”

Stamper had thought he’d made a good shot. After an ample wait, he climbed down and looked for blood. He found some, and then took up the blood trail. He eventually recovered the buck. He was just happy that his father, brother, and best friend were all involved.

They were just in shock, in disbelief like I was. The excitement and kill from the animal were celebrated as a group. I just want to thank my father for introducing me to the outdoors and sharing his love of hunting with me. Without Dad, none of this would be possible.”

“I feel blessed to harvest a deer of this magnitude,” Stamper said. “The hunt was miserable. I didn’t see any deer for two days, hunting daylight to dark. I always wanted to kill a Booner but killing one of this caliber is life-changing…Deer hunting is my life. My dad raised me to hunt. It’s my obsession. I eat, sleep, and breathe it. I am constantly looking and studying maps to scout new areas. I talk about it all the time. I hope my son finds as much passion in deer hunting as I do. Deer hunting is where I find God.”