Turkey season with no training wheels is tough—and incredibly rewarding 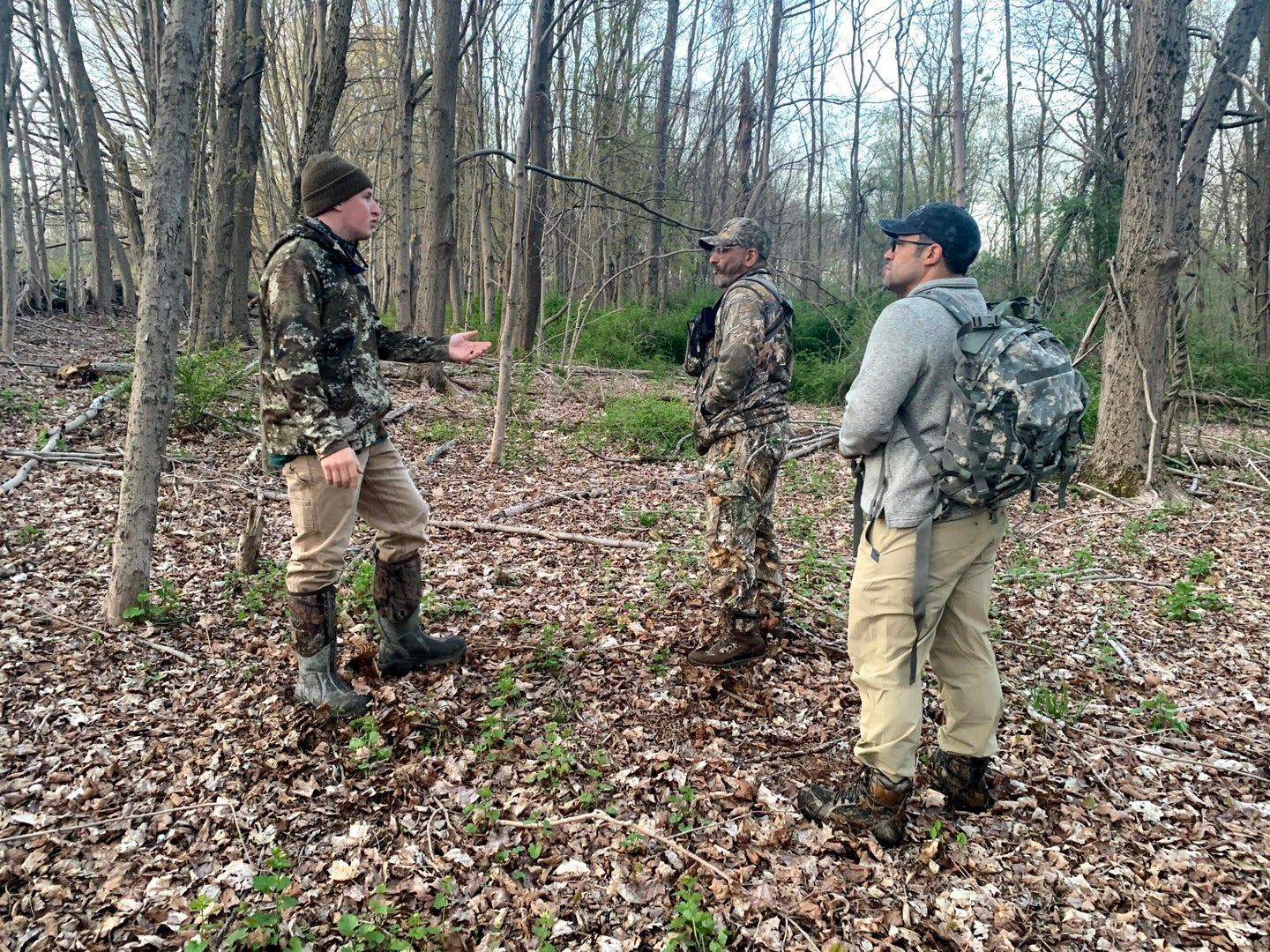 Your first season without a hunting mentor may be overwhelming, but you might be surprised by how much you do know. Cliff Cadet
SHARE

I met Anthony by way of social media, about two months before New York’s 2020 spring turkey season. Someone had told me there wasn’t any public land to hunt near New York City; Anthony told me otherwise.

It turned out that Anthony was, and still is, the assistant director of a deer management program for a preserve less than an hour from my home in Queens. He and I spoke a few times, then met up to scout the preserve. It was the first time I’d ever truly scouted, and I learned a lot. Not too long after that outing, my new hunting mentor invited me to bowhunt turkeys with him. I accepted, as I had never been turkey hunting and I eagerly wanted to try it.

We met up on opening weekend. Anthony had planned to roost some birds earlier that week, but his work schedule didn’t permit it. Plan B was to hunt the same spot he arrowed a turkey the prior year. At that property, we hiked a good way. When we finally stopped, Anthony proceeded to show me how to set turkey decoys and make a knee blind for bowhunting. Once our setup was complete, we sat behind the blind with our backs against a large tree, said a prayer, and waited for the sun to rise.

The wind had been blowing hard from the moment we arrived. Anthony told me that would make calling difficult. After two hours without a gobble, he made the call to move to a second, and then third, location. Both spots yielded zero results.

It wasn’t until a long hike up the side of a steep mountain that we finally heard the sound all turkey hunters yearn to hear. The gobbles took us by surprise, and we dropped to the ground, just beside a rock wall. It provided cover as we watched a hen on the other side. As she passed, Anthony hit his box call and we heard the turkeys gobbling again. Almost immediately, three jakes appeared.

I sat with my back against a tree, legs kicked out in front of me. I had an arrow nocked with my bow resting between my legs. Anthony was a few feet in front of me. He turned back to me and, using hand signals, asked if I’d be able to shoot over the rock wall. When I whispered that I could, he hit the deck and got out of the way.

I popped up and drew my bow carefully. Using my single-pin sight, I traced a line along the ground and rested it on the turkey’s vitals. I let the arrow fly and it hit its mark. I’d just successfully harvested my first turkey. It was my first turkey, my first bow kill, and my first hunting kill, all in one go.

In my head, the training video montage ends here. “Eye of The Tiger” fades out.

Hunting (Mostly) Without a Mentor

In case you missed it, there has been a huge push to recruit more hunters in recent years. In March of this year, Matt Rinella disappointed many hunters by stating his case against hunter recruitment. But I know plenty of experienced hunters who love the idea of making more hunters—they’re chomping at the bit to take new hunters out. I’m a so-called adult-onset hunter myself, and I was lucky to find a mentor who was willing to teach me to hunt.

But what happens when the mentoring begins to wind down, and the mentee ventures out into the woods on their own? Can the “graduate” make it on their own?

My 2021 solo turkey season has already come to an end. I’d like to say I was able to replicate last year’s success. But I’d be lying if I did.

In the year since that bowhunt, I amassed a collection of turkey calls and I practiced a lot. It’s safe to say I pissed my wife off plenty. If she never hears a turkey call again, she’d be totally fine with that.

This year, I was able to hunt a total of four days. On opening day, I attempted to pay it forward by taking a buddy out on his first turkey hunt. No turkeys were killed that day. But my boy got such a kick out of hearing turkeys gobble for the first time.

On the second day out, I partnered with Anthony again. We returned to the spot where I killed my turkey last year. We came so close to taking a huge tom. But the bird just wouldn’t commit, and we went home without punching our tags.

Those first two days were fun. But I was nervous about the last two. I felt like hunting by myself would prove whether I had the skills to get the job done or not. And on the third day, I got lost on my way to the land I was hunting. The sun was already rising when I pulled into the parking area. I ended up running into another hunter and he headed into the woods before I did.

But that didn’t deter me. I made my way up the mountain and when I reached its peak, I found a nice-sized tree with some great cover behind me and started calling. The turkeys gobbled back immediately, and it was on. I spent about an hour calling and hearing them respond. About an hour after that, I watched what looked like three jakes stroll by. They gobbled when I called. But they wouldn’t stop. The day would just be full of calls and gobbling responses. Noon hit and I went home empty handed.

On the fourth, and final day, I got to my parking spot nice and early. I got my gear on and threw my headlamp on my head. I’d made it 50 yards into the woods when my light went out. Oh, hell nah! My dumb ass forgot to charge the batteries. (If you know anything about me, then you’ll know that walking through the woods in the dark, by myself, is not something I’m comfortable with. Think I’m a punk? That’s okay. I’m cool with that.)

I used my iPhone flashlight to barely light my way back to my car. While back at my car, I charged my headlamp for about 30 minutes. I headed back into the woods right after that. By then, I didn’t need the headlamp because the sun was already coming up.

Back at the top of the mountain, I set up my decoy in an open area and picked a spot about 25 yards away from it. I started hitting my call immediately and got the turkeys gobbling. Within an hour, I had my sights set on two birds. One was a jake that stayed about 40 yards off and kept throwing up his fan. The other bird was a jake that didn’t reveal himself for about 30 minutes. But when he did, he passed about 20 yards away from my decoy. I honestly couldn’t understand why he didn’t make his way toward the fake hen. Both birds drifted off to a field on some private land I couldn’t get to. And that was that.

Silver Linings of a Solo Season

To add insult to injury, a social media buddy sent me a message on the last hour of my last day of hunting, bragging about how he had just killed his second bird of the season. I congratulated him. But I honestly felt like crap. My first real turkey season had been a bust. Was I only successful because my mentor did all the work? Did I just get lucky last year? The answer is probably yes to both questions.

It took the hour-long ride home to process the events of my season and understand what my successes were.

Many hands make light work. So, hunting in pairs makes it a bit easier to split duties. One hunter can call while another glasses for some birds. But hunting turkeys solo can literally be a handful. From using turkey calls and using binos to carrying your bow, properly juggling all the tools at your disposal is a big part of the battle. I believe I did it well.

I never scouted the property I hunted. But using the knowledge Anthony taught me, I ended up under roosted birds every morning. Then there was my turkey calling. I carried a box call, two pot calls (glass and slate), and kept a diaphragm call in my mouth all morning. I used all of them, and the turkeys responded each time.

I have to look at it this way: I worked hard all year to get better at calling birds, and it paid off. I just as easily could’ve called to birds and not had any response. Or worse yet, I could’ve not heard or seen birds at all. They didn’t come into bow range, but they sure came close. I did that by myself, and that’s way more progress than where I was a year ago.

At the end of the day, I didn’t get last year’s results. But I was successful in so many other ways. And that’s another kind of victory.

Cliff Cadet was born and raised in Brooklyn, New York, where he often catches the bus to his hunting spots outside the city.