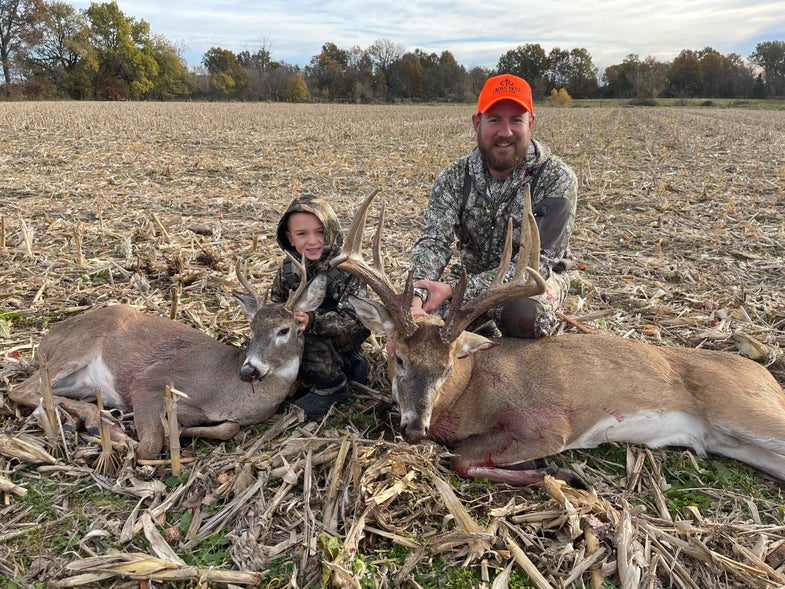 Six-year-old Clayton Selvey and his dad, Grant, with their awesome Missouri bucks.
SHARE

It was 7 a.m. on the second day of the Missouri rifle season when Grant Selvey, 36, climbed into an elevated box blind with his 6-year-old son Clayton. Clayton and his twin brother, Oakley, are experienced hunters despite their age. Both boys had taken their first deer earlier in the year with crossbows. So when the sun rose and bathed the property in sunshine on Nov. 14, Clayton knew what to expect.

The Selveys saw a few deer in the distance, but it wasn’t until a 7-pointer stepped out at 35 yards that Clayton got a chance at his second deer. Clayton shot the buck with his rifle, chambered in 6.8mm, and the two hunters watched the buck run through the woods and fall. They celebrated—quietly—in the blind.

“It wasn’t three minutes later when Clayton looked up and said, ‘There’s a big buck’,” says Selvey, who is a retired motorcycle police officer in Springfield. “The deer was 75 yards away crossing a woods road so I didn’t have much time to get on him with my .300 Win. Mag. But he stopped in the lane for a moment with his head behind a tree. I couldn’t count points, but I knew he was a good buck.”

Grant squeezed off a shot, and the deer ran about 100 yards and tipped over. The 11-point buck would later green-score just over 170 inches. Grant estimates the buck was 4.5 years old and around 200 pounds.

“We climbed down from the box blind and called my wife, and my 91-year old grandfather drove out with my other son, Oakley, in an ATV to pick us up with the deer and drive back to camp and celebrate,” Selvey says.

That same afternoon Grant headed to a ground blind with Oakley at about 2:30 p.m.

“We didn’t see much for a couple hours, and Oakley was fidgeting and ready to leave,” says Selvey. In addition to teaching his kids to hunt, Selvey is a local volunteer chapter leader for Cross Trail Outfitters, which specializes in taking youngsters fishing and hunting.

But just before dark a little 3-pointer showed, and Oakley made a perfect 70-yard shot with the same rifle his brother used that morning.

“Through CTO I get to take lots of kids on their first deer hunts, but this year I was fortunate enough to take my twin boys on theirs,” Selvey says. “It was really special, and at a perfect time being so close to the holiday family seasons.”