News outlets and government officials in Pakistan have confirmed that a photo showing U.S. Consul General William K. Makaneole with a harvested markhor was a fraud 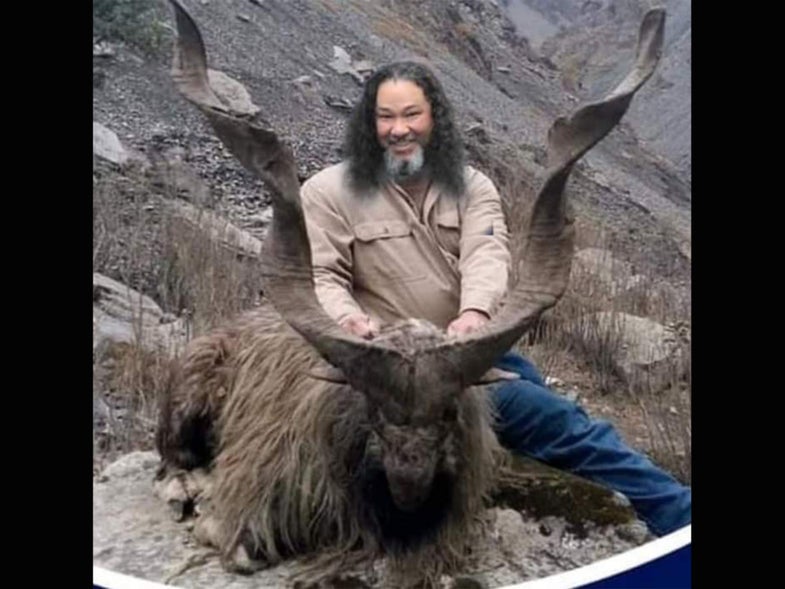 A fake photo of a U.S. diplomat hunting in Pakistan made waves in a small corner of the Twitterverse last month. The photo, which was shared to Twitter on Dec. 23, shows William K. Makaneole, the U.S. Consul General in Lahore, Pakistan, posing with a dead markhor, a rare and coveted species of mountain goat that also happens to be the country’s national animal. A scathing caption written in Urdu claimed the photo was as a symbol of America’s domination over the South Asian nation and its natural resources, which led other Twitter users to pile on similar criticisms. “The American ambassador is proving that the markhor is in their hands,” another user wrote in a re-Tweet.

Pakistani news outlet Geo TV fact-checked the Tweet the following week and concluded that the trophy photo was a deepfake. Geo TV used an image verification platform to prove that the image had been manipulated, and a government official confirmed it was an older photograph that had been altered to make it look like Makaneole had hunted and killed the animal.

“The image is photoshopped,” chief wildlife conservator Dr. Zakir Hussain told the news outlet. “This hunt was in Chitral a few years back, from the information I have gathered through my field staff.”

As part of a follow-up story on Jan. 14, Agence France-Presse traced the photo’s origins using a reverse image search. AFP found that the original photo was of a Texas hunter named Fred Rich, who legally hunted and harvested the markhor in 2016 after paying the Pakistani government $100,000 for a special hunting permit. Those permit dollars are used to fund markhor conservation efforts in the Chitral region. AFP also received a comment from Karl Rogers, Makaneole’s spokesperson, who explained that the Consul General had never even hunted in Pakistan before.

“The image is not Consul General Makaneole. He has not hunted in Pakistan, and no diplomat currently serving at the U.S. Consulate in Lahore has gone hunting in Pakistan,” Rogers said.

The global news outlet also pointed out that the fake photo was likely created to stir political controversy. Tensions between the two countries have been building since former prime minister Imran Khan was voted out of office in April 2022, and Khan has since claimed that the United States was behind his ousting as part of a larger regime change conspiracy, according to AFP. Accordingly, the deepfake photo and the accompanying caption would have helped fuel these anti-American sentiments.

Fake hunting photos are not a new phenomenon. Thanks to the evolution of Adobe Photoshop and other editing programs, it has become easier than ever to create fake images and videos. There are countless examples of hunters holding up animals they never killed or posing in front of altered backgrounds. The advent of social media has also made spreading fake photos commonplace.

While most of these Photoshopped images are easily recognizable to the trained eye, others are surprisingly convincing. The rise of artificial intelligence will only make the problem worse. This technology essentially gives users the ability to create fake photographs out of thin air, and AI is evolving at such a fast rate that we could soon be looking at future where it will be nearly impossible for most internet users to distinguish real photos from fake ones. The implications for misuse of this technology range far beyond the hunting world.

This burgeoning (and some would say, terrifying) technology also comes amidst the current era of “cancel culture” in which an influential person or group can be ostracized on the basis of a singular action or social media post. And the sad truth is that hunters often end up in the crosshairs. The backlash against any photograph showing a dead animal can be swift and merciless, regardless of whether the photo is real or not. (Just ask Steven Spielberg about some of the reactions to a satirical “trophy photo” that showed him posing alongside a Triceratops in 2014.)

The traveling big-game hunter who visits far-flung locations has become one of the easiest targets for those looking to take someone down on social media.

“The hunting community is unfortunately accustomed to the use of photoshop and deception to, directly or indirectly, slander hunters and the sport of hunting writ large,” Safari Club International CEO Laird Hamberlin said in an emailed statement to Outdoor Life. Hamberlin added that the organization can’t say for certain whether the person who manipulated the markhor photo was motivated by political reasons.

“What is clear about this incident is that the culprit ignored or was ignorant of the contributions legal Markhor hunts have had on the health of the species in Pakistan and the region,” Hamberlin said, pointing to the rise in markhor populations since regulated hunting was established there in 2011. “Individuals that use deception and ignorance to push an agenda would do better to consider these facts before involving hunters in their schemes.”