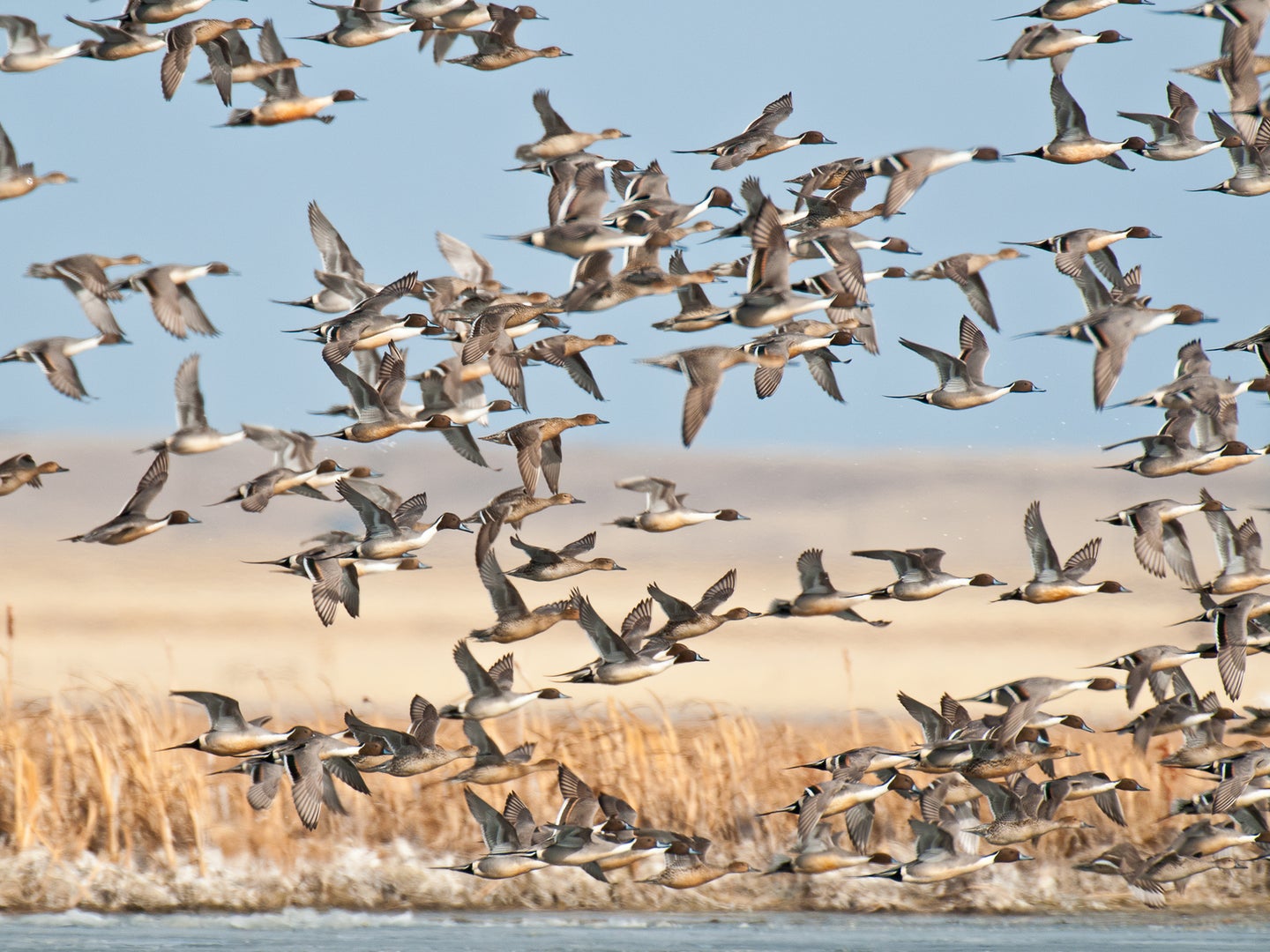 A wad of pintails moves out. Duck season doesn’t have to end when the ducks leave if you’re willing to hit the road. Tony Bynum

IT’S DARK and raining on the Canadian prairie. Most sane people are still tucked in bed or just putting on a pot of coffee. But the group of us getting soaked to the bone setting out decoys and brushing in A-frame blinds in a cut pea field are all certifiable. We’re jonesing for cupped wings, and the only way to get our fix is to wake up before the ducks and geese fly from their roost waters to these grain fields to feed.

The morning is full of the usual anticipation, plus an extra helping. That’s because we’re hunting one of the oldest birds in the world: the sandhill crane, a flying, 4-foot-tall velociraptor with a wingspan of up to 7 feet. At first light their distinctive purrs break the prairie stillness, and we are all now very awake. Their razor-sharp talons dwarf the spurs of any 3-year-old tom. Sandhills have long and pointed beaks, and they aren’t afraid to spear you or your retriever with them.

The first cranes glide into the decoys. Some of us have never hunted them before, but even we can tell that once the sandhills commit, there’s no backpedaling. They are big and clumsy and can’t gain altitude fast enough as we raise our shotguns in unison. Most of the birds tumble from the sky in a tangle of wings and legs, but two sail into the peas. Our guide, Dusty Brown, doesn’t hesitate to stomp through the muddy Saskatchewan stubble toward one of them. The bird spouts a vicious hiss and spreads its wings.

But Brown gives the crane a swift boot right in the chest and it flops back. He finishes it quickly. He has to get the crane to the ground to kill it and protect himself and his Lab, Briley. The second, less experienced crane guide is far more tentative, dancing around the second sandhill like a nervous boxer in the opening round of a fight.

“The first time one stood up and hissed at me, I did the same thing,” says Brown, who has since hunted cranes in Texas, season after season. “I wasn’t sure if it was going to attack me or my dog, and so I was hesitant.”

His experience is the product of chasing the annual waterfowl migration from Canada south to the oil fields of Texas and back north in spring for the conservation snow goose order. The 50-year-old guide has been doing this for more than 20 years. Most core duck hunters undertake similar journeys at some point in their careers, starting in the Prairie Pothole Region in September and calling it in the South come January, stopping at points along the way to intercept ducks and geese.

“When the lakes and rivers freeze up, that’s the end of the season for a lot of hunters because the birds move on,” says Brown. “But for guys like me, it’s just another stop along the way. We never want our season to end. So we hitch the trailer, hop in our trucks, and follow the birds.”

A Way of Life

Like so many duck hunters who live a migratory lifestyle, Brown has been infatuated with waterfowl from an early age. A friend’s dad took him on his first hunt, floating a garbage can full of decoys into the marsh, dumping them out, and then coming back for the two boys. They both climbed into the can and used it as a blind while his friend’s father shot ducks. During high school, Brown worked for his dad, slinging pizzas in the bustling flyway of Oregon’s Willamette Valley. He saved all the money he made slicing pepperoni to lease farm ground along the Pudding River. It flooded every year, creating seasonal wetlands for ducks.

The hunting along the river was good enough to last a decade. Brown didn’t start living on the road until his late 20s, when he began buying every goose call he could get his hands on.

“The calls really intrigued me, but I didn’t know anything about contest calling because the world championships in Stuttgart, Arkansas, were 2,000 miles away,” Brown says. “I won the Oregon state goose calling contest in 2001 and became a goose guide at 27 years old.”

That win led to competition calling at contests across the country. Back then you had to listen to live callers to improve (YouTube didn’t exist yet), and that meant traveling from state to state, learning from the best along the way.

By then, waterfowling had Brown firmly in its grasp, and he only wanted to hunt more and see new places. That urge took him up and down the Pacific and Central flyways. The same thing happens to a lot of duck hunters: the early mornings, feathers cutting through wind, tricking birds into the decoys. Some hunters can never get enough, and that’s Brown. He can’t stop. And he doesn’t want to.

“You see a lot of guides who are single because they have devoted their lives to this and a relationship doesn’t play into it,” says Angie Erickson, who hunts with Brown at her Curly Tail camp in Saskatchewan in the fall and spring. “It happened to me. Once you start, it’s an addiction. I hate to call it that, but that’s what it is. I have young twin boys and had to pull the reins in. I was consumed with setting spreads and fooling birds, and I was not spending enough time with my family. When I stopped, it was like going through detox.”

That’s the sacrifice this kind of duck hunting requires. You can lose yourself in the migration, and it pulls many hunters away from the folks they love most. It’s hard to watch hunters with more freedom continue to the next duck camp while you head home and take care of your responsibilities. It can cause jealousy, test friendships, and even end marriages. Brown has seen it happen time and again. It’s the reason, he says, he’s never married and never had children. Because he made his choice years ago, he doesn’t have to choose each season.

Brown won’t be able to pass the knowledge he’s gained as a guide down to a son or daughter, but he does share his expertise with any hunter who’s willing to listen. Unlike some guides who talk at their clients, Brown cares enough to teach his something new. Because odds are they’re not as talented as callers and can’t read birds like Brown.

“Dusty has become one of my best friends in this entire world,” says Hunter Pickett, who began guiding with Brown in Canada and Texas when he was 21. “He’s helped me personally become a better guide and given me the knowledge to kill birds consistently so I can keep doing this for a living. I wake up at 4 a.m. eight or nine months out of the year to go hunt. That’s a great life for a duck hunter.”

Brown’s lessons aren’t patronizing either. When I hunted cranes with him and that handful of other hunters, it felt like old friends sharing a morning together—the way duck hunting ought to always be.

Many guides who travel as much as Brown eventually settle somewhere. They cut back on the number of days they hunt or open outfitting businesses of their own. If Brown has one regret, it’s that he has never successfully worked for himself.

He did try to open his own guide service once in Alberta, with a friend. After years in transit—he’s gone through three Cummins diesel truck engines, which last up to 350,000 miles apiece, in the last two decades—Brown put down stakes. But it was bad timing. Just as the 2001 waterfowl season kicked off, terrorists flew into the World Trade Center. Air travel was suspended for only a few days, but new flight restrictions and fear of another attack caused clients to cancel, and the business went under.

It was a major financial hit for Brown, and it understandably soured him on ever owning another guide service. The COVID-19 pandemic only solidified his stance on never taking that chance again as he watched many Canadian outfitters shutter their businesses due to the extended U.S.-Canada border closure.

“I’ve always worked for someone else,” Brown says. “I think that if I could have started a business here in Oregon, that’s what I would have done. But I just never felt comfortable doing that because we don’t have the bird numbers to make it sustainable.”

Still, not owning an outfit has allowed Brown the freedom to move on when he’s ready for the next adventure. He can’t help that the migration is in his blood. Even at 50, he continues to follow the birds as they make stops along their traditional routes while exploring new spots as migration patterns shift. Brown shows no signs of slowing down.

“I still get excited as we come out of summer and the cooler months are upon us,” Brown says. “You start to see fields full of geese in late August, pay attention to how they act, and I just can’t wait to get on the road—to be there when the first birds come to the grain fields of Canada.”