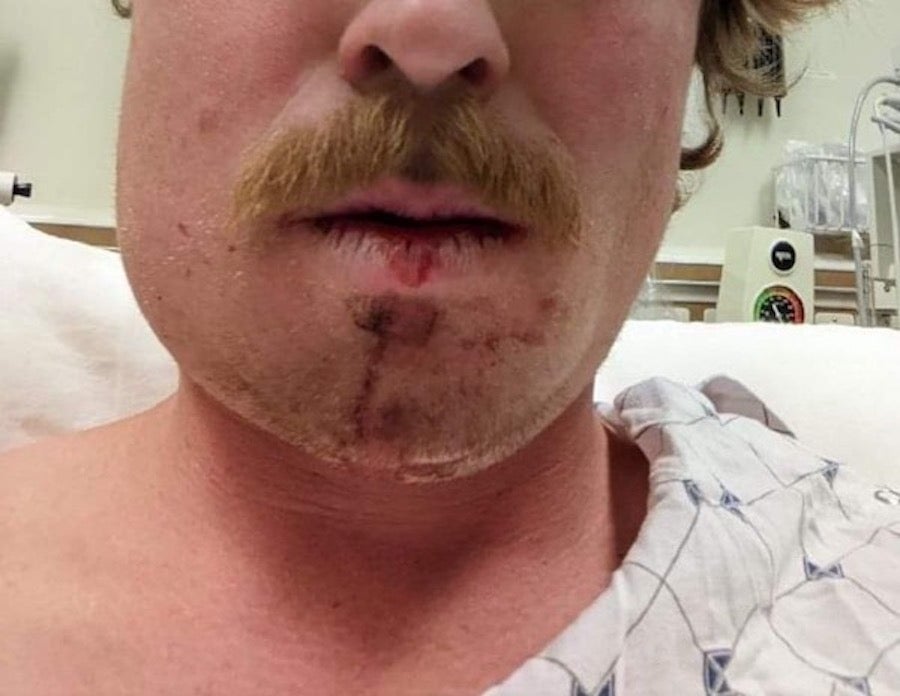 The victim was still in the hospital as of Wednesday morning. courtesy of Noble Handley
SHARE

Two young men were allegedly assaulted last weekend while elk hunting in the Greys River area roughly 50 miles outside of Alpine, Wyoming. The Lincoln County Sheriff’s Office shared a press release to Facebook on Monday giving a rough description of the two suspects. Two days later, the post was updated saying the suspects had been identified, and on Thursday, the sheriff’s office wrapped up its investigation and released the names of the alleged attackers.

“The Lincoln County Sheriff’s Office has concluded its investigation into a reported assault that occurred in the upper Greys River area during the elk season opener on October 15, 2022,” the sheriff’s office wrote in a press release. “Affidavits supporting the charges of Aggravated Assault and Robbery against Shea Patrice Sanchez, 30, of Green River, Wyoming, and Jared Michael Olguin, 35, of Elizabeth, Colorado, have been filed with the Lincoln County Attorney’s Office.”

The sheriff’s office added that investigators identified the suspects after searching the area where the alleged attack took place and finding two men that fit the descriptions provided by the victims.

The victims, who are in their early 30s, were reportedly elk hunting with two other men at the time of the alleged assault, which took place around 5:30 p.m. on Oct. 15. The incident resulted from a confrontation with another group of hunters, according to the sheriff’s office.

One of the victims was injured badly, suffering multiple jaw fractures, and he was still being treated at St. Vincent Hospital in Billings as of Wednesday morning. The victim’s father, Noble Handley, tells Outdoor Life that he doesn’t want to share the identities of the victims, partly out of their concern for retribution, and also because his son is still recovering.

“They’re telling us he’s needing [surgery] for the amount of trauma repair,” Handley says. “They are trying to coordinate the scheduling in the OR.”

The details behind Saturday’s incident are hazy, but Handley shared the limited information he was able to glean from his injured son over the past few days. He says his son and three friends first encountered the other group of hunters around 8 a.m. on Saturday. The group was drinking while they butchered a cow elk just off Greys River Road in the vicinity of Shale Creek. The group said they had also shot a 4×4 bull down the road, and then they headed off.

Read Next: Court Case Involving Three Vermont Hunters, a 61-Year-Old Suspect, and a Can of Bear Spray Moves Forward

Hours later, Handley says, his son’s group came across a dead 5×6 bull. With nobody around to claim it, and not wanting to waste the meat, they waited for about 20 minutes before they butchered the animal and used one of their tags on it. After bringing the harvested bull back to their camp that afternoon, they headed out to hunt again. Around 5 p.m., while driving in a side-by-side on Greys River Road, they ran into the same group of hunters from that morning.

“Two guys got out of the truck and approached them quite agitated, accusing them of stealing their elk,” Handley explains. “My son tried to verify some details…but the guys from the truck rummaged around the backpacks, guns, and gear in the side-by-side. All of a sudden things escalated, and my son’s friend was pulled out of the side-by-side and they started beating on him.

“My son got out and tried to intervene and deescalate,” Handley continues. “One of the guys told my son to take off his sidearm and my son refused and continued to talk, trying to deescalate. Then the guy went psycho on him, pummeling his face. My son yelled out ‘Stop! You’ve broken my jaw,’ and there was a third person who yelled from the attackers’ truck. My son now dripping with blood and in severe pain got his friend’s attention, telling him to get in the side-by-side and leave to go get his truck. The attackers grabbed a hunting backpack out of the back as they drove off. My son grabbed what gear he could, threw it in the back of his friend’s truck and started the painful trek back to Alpine.”

Handley says he expects his son to have a long and painful recovery.