The Currie kids get to choose a birthday adventure every year. Ridgley Rae, 6, chose to "go elk calling" with her dad 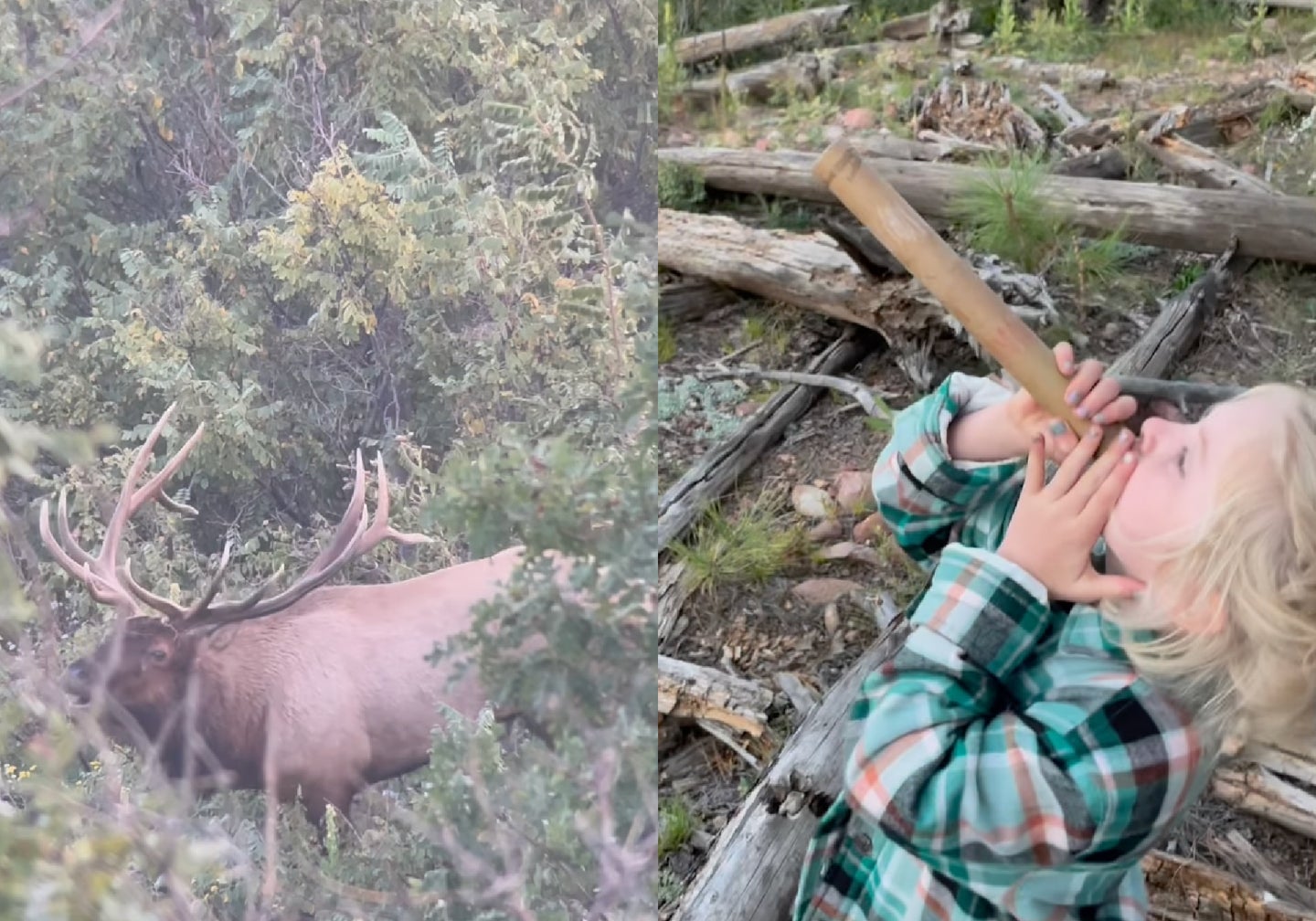 Sometimes, if you’re lucky, birthday wishes come true. For Ridgley Rae Currie from Young, Arizona, that would mean seeing a 7×6 bull elk stomp out of the brush and return her long, drawling bugle and chuckle with a little noise of its own. It’s a wish every autumn-born elk hunter would whisper into birthday candle flames with closed eyes.

But for Currie, it turns out luck has nothing to do with it. When you can call with a cardboard tube like she can, bulls come out of the woodwork on their own.

When mother Kalea Currie asked Ridgley what she wanted to do for her birthday this year, offering up a manicure as a suggestion, Ridgley fired back a much different answer.

“She broke out in an almost emotional state and said ‘I just want to go elk calling with dad, that’s all I want to do for my birthday!'” Kalea recalls. “She’s been practicing with her tube at camp almost every night and day. We didn’t really teach her, she just kind of picked up on it.”

So Ridgley and her father Dillon Currie went out to a glassing knob both the night before and the morning of her birthday. The video is a series of clips taken from both sits. Ridgley called in multiple elk by funneling her high-pitched voice through a homemade bugle tube, but the one that stood out was the 7×6 bull who answered her almost immediately.

“He was several hundred yards away when we first saw him, it was super foggy and we walked out on that point. It had stormed the day before and we didn’t have good visibility to glass, but the elk were talking,” Dillon says. “She gave her bugle and he immediately responded and started coming in to about 65 yards. I think she called at him once more and he came out of the trees and stood broadside for about 5 to 10 minutes. Had we been hunting, he would have been a very easy bull to kill, since he was standing broadside and within range.”

Kalea and Dillon Currie run their own outfitting operation in north-central Arizona. Dillon had a hard time leaving his young family behind for so long to do his job, which eats up about half of the year. So the foursome transformed a fifth-wheel trailer into a tiny home and turned Dillon’s guiding service into a full-time family business. Ridgley, now 6, and her 2.5-year-old brother Rocklen Chase spend most of their fall and winter in elk, bear, and deer camps. Sometimes their grandparents join so that Dillon and Kalea can get out for a little hunting of their own. Kalea killed her first bear in the first week of October.

But the guiding lifestyle means something different to the Curries than it does to other outfitters. They focus more on the rich adventures and strong memories backcountry big game hunts create, rather than just obsessing over huge antlers and notching every tag. Ridgley, who is homeschooled, learns important lessons like how to chop wood and make bear burgers when she isn’t studying math or reading. But elk calling seems to be her specialty.

“My dad was trying to help me find elk, and I’ve heard videos before and I wanted to do it,” Ridgley says. “It works for me. I’ve been practicing.”

“In front of all our clients,” Kalea chimes in, laughing.

“We’ll be sitting around the campfire and she’ll be making elk calls and getting bulls to respond when we’re having dinner with all the clients,” Dillon says. “It’s good entertainment.”

Aside from elk, Ridgley says she sees a lot of bears with her dad, even though she doesn’t “know how to bear call, only elk call.” She’s still four years away from being able to hunt in Arizona, but she will definitely be ready when the time comes. In the meantime, she fishes with her family and joins just about every hunt under the sun, from bear to javelina to Coues deer. But elk hold her heart. When asked why, her answer is pretty simple: