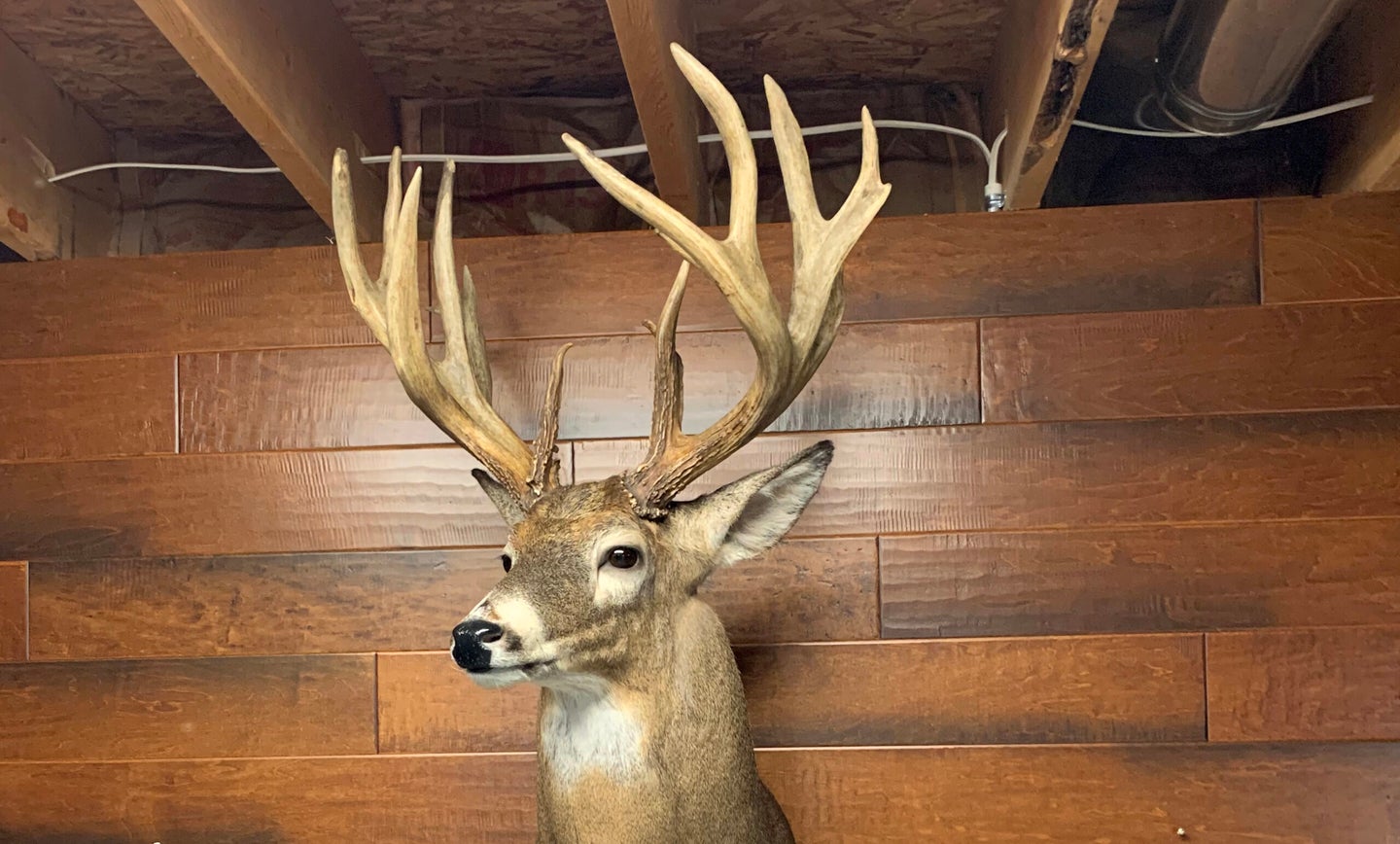 Before stumbling across a Facebook photo of this shoulder mount, the last time Beachy saw this buck was from his treestand. Courtesy Trent Beachy
SHARE

It was September 2019 when Trent Beachy of Stark County, Ohio, first saw the buck. He couldn’t believe the trail camera photos of the giant.

“He was massive, unlike anything I’ve seen in the woods or any of my friends and relatives [have seen],” said the 23-year-old hunter from Hartville.

Beachy hadn’t seen the deer on the hoof—he was only getting photos of the deer with trail cameras. The deer only showed up near his treestand at night, in a small 6-acre swampy area of family property that wasn’t, surprisingly, the most choice spot on the place. As a nursing student, Beachy didn’t have the time nor the money for a quality deer lease. So he’d been bowhuntiing from the only suitable tree in the little swampy spot close to his home. And now he knew a great buck lived nearby, it didn’t seem like such a bad spot anymore.

Then in October, Beachy finally saw the buck from his stand, cruising along at 70 yards away.

“He was awesome, and I decided to spend every possible minute I had hunting him,” he says.

Beachy didn’t see the buck with distinctive non-typical rack again until one late afternoon in December, after the state gun season. The buck was crossing a big grassy field behind his stand, slowly walking near his in-laws’ house. Beachy worried that a car might spook him when the buck walked across the driveway, but nothing happened, and the deer walked into the swamp.

“At 70 yards he turned onto an old brushhog trail my grandfather cut in the swamp, and headed my way.”

It was nerve-racking watching the deer amble closer but, in reality, it only took a few minutes for the buck to reach 20 yards. Beachy made a soft grunt to stop it.

“He turned and looked behind him, and that was the time to steady my crossbow and make the shot.”

Beachy heard the whack of the broadhead, and watched the deer turn and race away across the swamp and into a neighbor’s pine woods. Beachy thought he’d made a good hit, and was confident the buck wouldn’t run much farther than other deer he’d taken with his old 150-pound, scoped Horton Magnum Safari crossbow. Even so, he waited nervously for 30 minutes before he climbed down and started blood trailing the deer.

It wasn’t long before he lost the trail in the pines. Beachy looked for two hours, but found no sign. He went home, returning in the morning to look for another two hours without any luck.

“I assumed I made a bad shot, but I kept checking my trail cameras and the deer just disappeared,” Beachy says. “That’s when I figured maybe the deer died. But no one for weeks said anything about finding a giant buck. I knew if someone found the deer I’d know about it, because a buck of that size can’t go unknown.”

Beachy said nothing to anyone about shooting the deer and not recovering it, mostly out of embarrassment for missing an opportunity at the buck of a lifetime. And that’s where the story stopped, or so he thought. In early 2021, a distant cousin—Jim Slabaugh—heard of someone finding a dead buck they believed had been poached but not recovered.

Slabaugh’s friend Matt Jordan had found a great dead buck while walking his dog near his home. Jordan had asked Slabaugh to recover the deer, as Jordan was leaving town for an extended trip. Before he left, he contacted the local game department and was issued a salvage tag for the buck, because the rack on the animal was too impressive to leave it.

When Jordan returned home, he decided to have the buck mounted because the antlers were so massive and unique. The 16-point rack has remarkable mass, with bases the diameter of a baseball bat. It wasn’t until December 2020 that Beachy saw a photo on Facebook of Jordan with the mounted buck. He immediately recognized the unusual rack. He also learned that Jordan had found the buck just 600 yards from where he’d shot the deer.

Beachy contacted Jordan, and told the story of his hunt. He asked Jordan if he could see the skeletal remains of the buck and check it with a metal detector to see if he could find his broadhead. Jordan agreed, so Beachy and his brother met up with him to examine the remaining bones behind Jordan’s house.

“It was cold, and snow was on the ground, but we moved it, and started scouring the skeleton area with the metal detector,” Trent says. “We hadn’t looked 15 minutes when we found a broadhead. It was mine.”

Read Next: After Being Barred from the Family Deer Camp, Beginner’s Luck with a 215-Inch Iowa Buck

The men knew it was Beachy’s buck, but Beachy told Jordan that the deer was his. He had found it, and he had mounted it. But Jordan insisted that Beachy keep the buck: he was the hunter who had killed the deer, and its rightful owner. Eventually, they settled it: Beachy offered to pay for the deer mount, and gave Jordan a check for $450 to cover the cost of the taxidermy.

“Jordan is a great guy. Because I got married in May, he said to consider the buck as a wedding gift,” Beachy says, noting that the buck will officially be scored soon. “He hasn’t cashed the check.”