The old buck had one good eye, a noticeable limp, and a massive spread 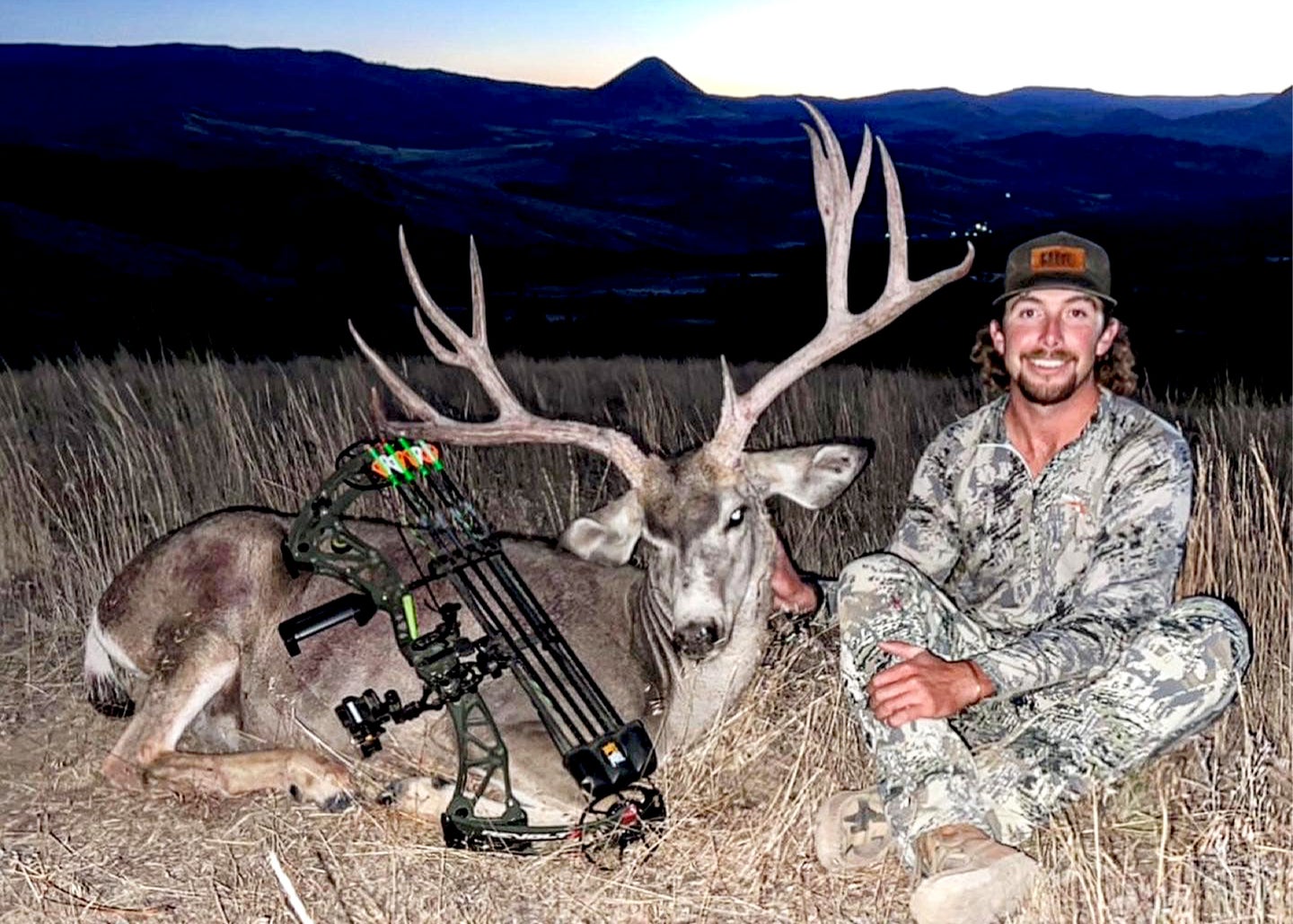 A bowhunter in central Oregon tagged a mule deer buck on opening weekend that he’d been chasing for going on four years. The buck that Arnold Fox nicknamed “One Eye Willy” was blind in one eye, walked with a limp, and had smooth, worn-out teeth that were ground down almost to his gums.

“He was a true old warrior past his prime,” Fox tells Outdoor Life.

The 29-year-old hunter lives in Prineville, and says he first caught the buck on a trail camera back in 2019. Fox had set up around 15 cellular trail cams on public land throughout the area that year, and the 4-point stood out from the rest of the big bucks he’d been watching. He could tell the deer had broken his back right leg at some point because it walked with a noticeable limp.

He didn’t catch the buck on camera again until just before the archery season opened in 2021. The muley still had both eyes intact at that point, but as soon as the buck showed himself, he disappeared once again.

“So this year I moved some cameras around on different water and I caught him again,” Fox says, “He started coming around pretty regular, and I knew this was finally the year.”

Fox says that when he took a closer look at the trail cam photos, he noticed that only the deer’s left eye would shine in the light. That’s when the buck—which must have had his right eye damaged during last year’s rut—got his nickname.

As Fox explains, he spent a good chunk of this summer “burning diesel and spending a lot of money just to figure this deer out.” He slowly pieced together One Eye Willy’s habits, noting the times the buck would come to water each day. It was a hot and dry summer, so when archery season opened on Aug. 27, Fox figured his best bet was to set up a ground blind near the tank and wait him out.

“He had been coming into water at weird times, like in the middle of the day, so I hunted him all day on Saturday and sat in the blind for about eight hours.”

Willy never showed, though, and after spending four to five hours in the blind on Sunday morning, Fox stepped out a little after 8 a.m. About two hours later, Fox was back in camp when he received a trail cam photo of Willy on his cell phone. The wise, old buck had shown up at the tank a little later than expected, so Fox went to plan B. He says he knew a spot further up the canyon where bucks liked to bed, and he and a friend took the blind there and set up.

As they sat in the cramped blind through the afternoon, they watched a big 3-point that was roughly 200 yards out. His friend wanted to go ahead and stalk the buck, but Fox made the call to stay.

“My gut was telling me to just wait, so I made him stay in the blind,” Fox says. “He was a little salty with me for it, but that was okay with me, because around 7 o’clock, I looked over and saw Willy coming in. He came in so fast, and my adrenaline was pumping so hard, that I couldn’t hardly get my bow pulled back. My buddy’s trying to tell me to relax but I was shaking so bad and couldn’t simmer down.”

By the time One Eye Willy got within 30 yards or so, the buck turned broadside with his right eye facing the blind. Fox knew he had an edge. He drew and let one fly, hitting the deer a little high and behind, and then settled down to wait him out. He used his satellite phone to text another one of his friends, and after a half-hour or so, Fox stepped out of the ground blind.

“I took ten steps out of the blind, looked around this juniper tree, and all I see is his ass end hanging out of the tree,” Fox says. “I saw that big, white mule deer butt and I just got so pumped.”

After his other friend showed up to snap some photos, they rough-scored the buck around 185 and ¼ inches, with an outside spread of 33 and ¾ inches. Fox says he’ll have the deer aged, but he thinks Willy could have been around 10 years old.