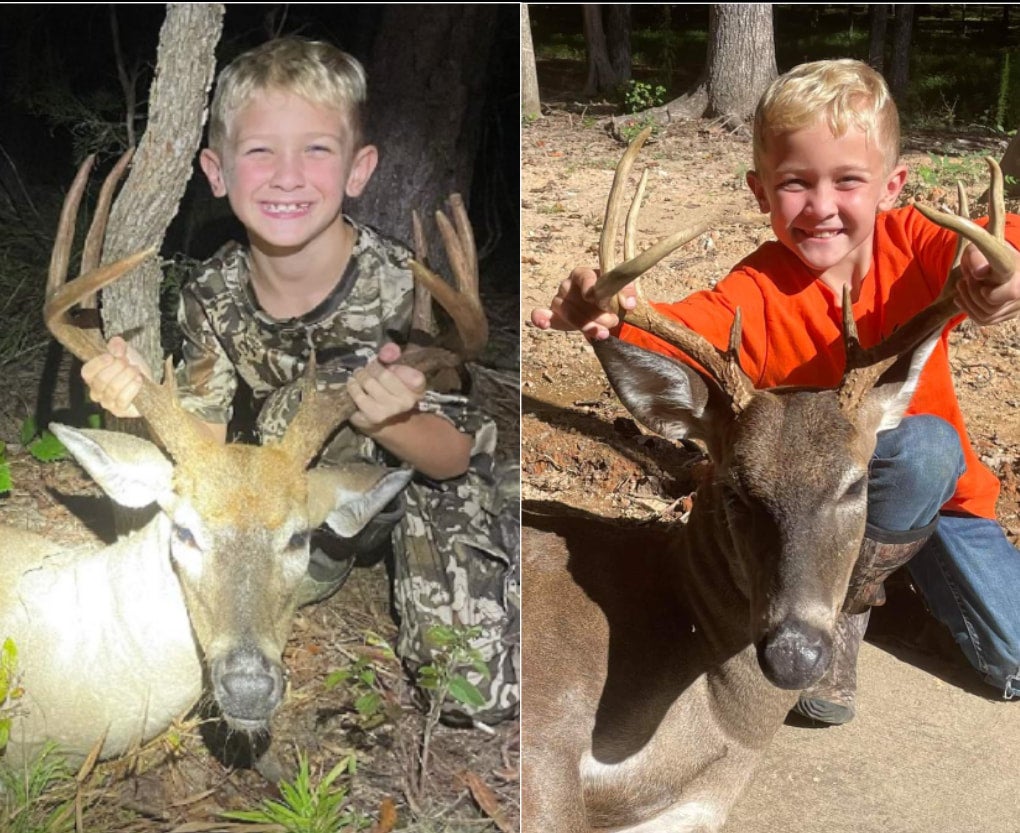 On the the afternoon of Sept. 17, Holden Freeman, age 7, was hunting from a deer box blind with his mom, Chelsea. The blind overlooked a food plot on their family deer lease in Lancaster County, S.C.

Trail camera photos over the summer showed some good bucks, including a beauty 9-pointer Holden nicknamed “Tank” and targeted for this season. Almost as soon as Holden and Chelsea got in the blind, they started seeing deer.

“Does and yearlings immediately started entering the field, followed by a few small bucks that have been hanging close with Tank,” Chelsea told Carolina Sportsman.

Holden passed on other deer in the food plot, figuring Tank was nearby and might show soon. He was right. Chelsea noticed the big buck entering the field about 7 p.m.

Tank got a bit jittery and moved around in the food plot. But he finally offered Holden a shot at 43 yards, and he made a perfect hit using a CenterPoint crossbow and Rage broadhead.

The deer raced out of the food plot following the shot.

“It left us an incredible blood trail,” said Chelsea Freeman. “We all began trailing him and ended up finding him laying on the edge of a grown up pasture. It was an amazing recovery, with tears of joy and so much excitement. It was an amazing hunt and an awesome buck.”

A week later, on the afternoon of Sept. 25, Hunter Freeman with his dad Bo, hunted the same deer lease. The spot was near another food plot and clear cut. Trail cameras revealed a pair of great bucks working the spot.

“We knew it was only a matter of time before Hunter connected with his crossbow,” said his dad, Bo. “From the time we sat down [in the blind], we had deer enter the food plot. Does, yearlings, and small bucks.”

A little after 7 p.m. a big buck showed and started heading their way, but it wasn’t either of the bucks Hunter had seen on camera.

“As Hunter got into [shooting] position and the buck entered the plot, we realized it was a bonus buck we had never seen before,” said Bo Freeman.

At just over 40 yards, the buck turned broadside, Hunter made a good shot on the deer, and it raced away.

“We tracked [it] for about 50 yards, but it [the vegetation] was so incredibly thick, and the blood [trail] stopped, so I decided to back out and return the next morning,” said Bo Freeman.

Read Next: A 14-Year-Old Just Shot One of the Best Bucks in Kansas History

They did, but a 4-hour search was fruitless, so they called Jamie Holler who owns a deer tracking dog, named Spud.

“Within 5 minutes of Spud being on the track, he bayed only 80 yards from where Hunter had shot the buck,” Bo Freeman said. “Everyone was filled with excitement. Hunter was overwhelmed with joy [with] the 180-pound, 10-point buck.