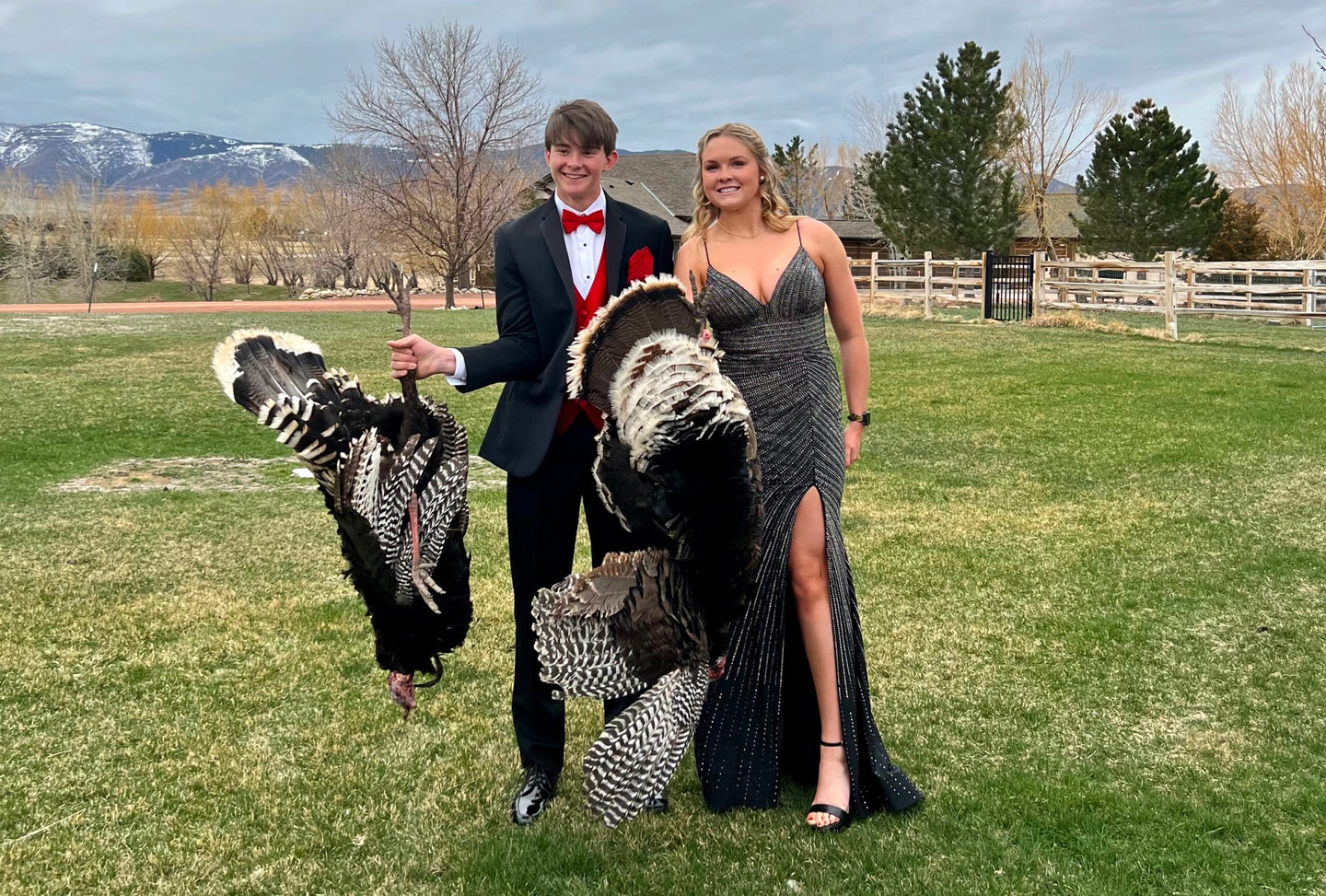 While high schoolers across the country were getting dressed for prom on April 9, Samantha Eliason and Frankie Maestri of Big Horn, Wyoming, were more concerned about filling their turkey tags.

Eliason, a 17-year-old junior at Sheridan High School, had bought her turkey license Saturday morning before she headed to Maestri’s to go trout fishing. She had a hunch she would need it.

“When me and Frankie hang out, we’re always up to something,” Eliason says of her childhood friend. Both she and Maestri, a sophomore at Big Horn High, grew up in ranching families in north-central Wyoming. “[We’re always] fishing, hunting, shooting.”

The two fished for a couple hours that morning, and it wasn’t until they got in Maestri’s car to head to Eliason’s place that they spotted turkeys. A flock of about two dozen Merriam’s had crossed onto his family’s ranch and into the riverbed.

They backed out and decided Maestri should shoot first—Eliason hoped to kill a bird on her grandparents’ ranch—so he grabbed his bow and they snuck into a thicket of willows at the base of a big tree. Maestri staked a hen decoy in the open and slipped a mouth call from its case. The toms in the flock gobbled back every time he yelped. They were close, but they weren’t in a hurry either, and it took about 15 minutes for them to work into range. Just before the birds crested the rise in front of them, Maestri drew.

He didn’t have a shot at the first big longbeards to appear, so he held at full draw. As the turkeys started to trickle across the nearby two-track, they spotted the two hunters in the willows. Eliason was still wearing her jeans and Muck boots, and had a pair of orange sunglasses pushed into her hair. Neither were wearing camo hats or facemasks. The flock began to spook even as Maestri, after nearly a minute at full draw, picked out a longbeard at 20 yards and released.

His gobbler ran a few yards and flopped over, while the rest of the flock trotted off. With one turkey tag filled, the buddies fished until meeting up with another friend and driving the 10 minutes to Eliason’s grandparents’. By now it was noon, and they were supposed to be home by 2 p.m. to get ready for prom. The three teens headed for Eliason’s favorite place on the ranch, a high spot that’s good for glassing. They could see for miles, but they didn’t see any turkeys.

“We were all kind of rushed. At that point in the hunt, we were like, ‘We’re just kind of messing around now,’” says Eliason, whose grandfather had tipped her off about some turkeys he’d seen that morning. “We weren’t as intense as we were in the beginning, so we didn’t even have any fans or decoys. We were just walking the property.”

They checked one last spot near an old farmhouse—and spotted a big flock of about 25 turkeys mixed in with grazing cattle.

“I actually spotted them which was kind of cool,” adds Eliason. “Usually Frankie has the good eye, but I spotted these ones. So I was like, ‘Oh my gosh, get down!”

The hunters backed out again, this time agreeing on a plan to stalk around the hill between them and the birds. Then the flock busted them, spooking over another hill and out of sight.

“We got up there and we saw them, but they were too far away. So we got down and waited it out” behind a bush, says Eliason. “There were cows in there, so the [turkeys] were going in every little direction. Just being ding-dongs, basically.”

So Maestri started calling. Eventually the turkeys started drifting in their direction before getting fired up and gobbling at each yelp. Eliason grabbed her 20-gauge Weatherby and crawled forward, the other two right behind her even as the turkeys practically “jogged” up the hill. She picked out a bigger longbeard that stood a little apart, aimed for the neck, and killed her tom inside 15 yards.

Positive Eliason’s turkey wasn’t going anywhere, the three left it where it lay and raced after the flock. They were hoping to fill a third tag for their buddy Lathe, but they finally had to concede it was getting late. The three hunters carpooled back to Maestri’s place and split up to get ready for Big Horn High’s prom that evening. Maestri was taking Eliason as his date.

When Eliason and Maestri met back up at her parents’ house—both dressed for the occasion this time—they decided to take the usual pre-dance photos and another grip-and-grin for good measure.

“It’s a heavy turkey and, of course Frankie’s got it handled,” says Eliason. “But I’m holding it up for probably five seconds so they could snap that one perfect picture and I got turkey blood all over the bottom of my dress. If it was a white dress I would’ve been done for, but thank goodness it was black.”

Fortunately, the blood washed right out of the hem, and the two tagged-out buddies made it to the dance with plenty of time to spare.