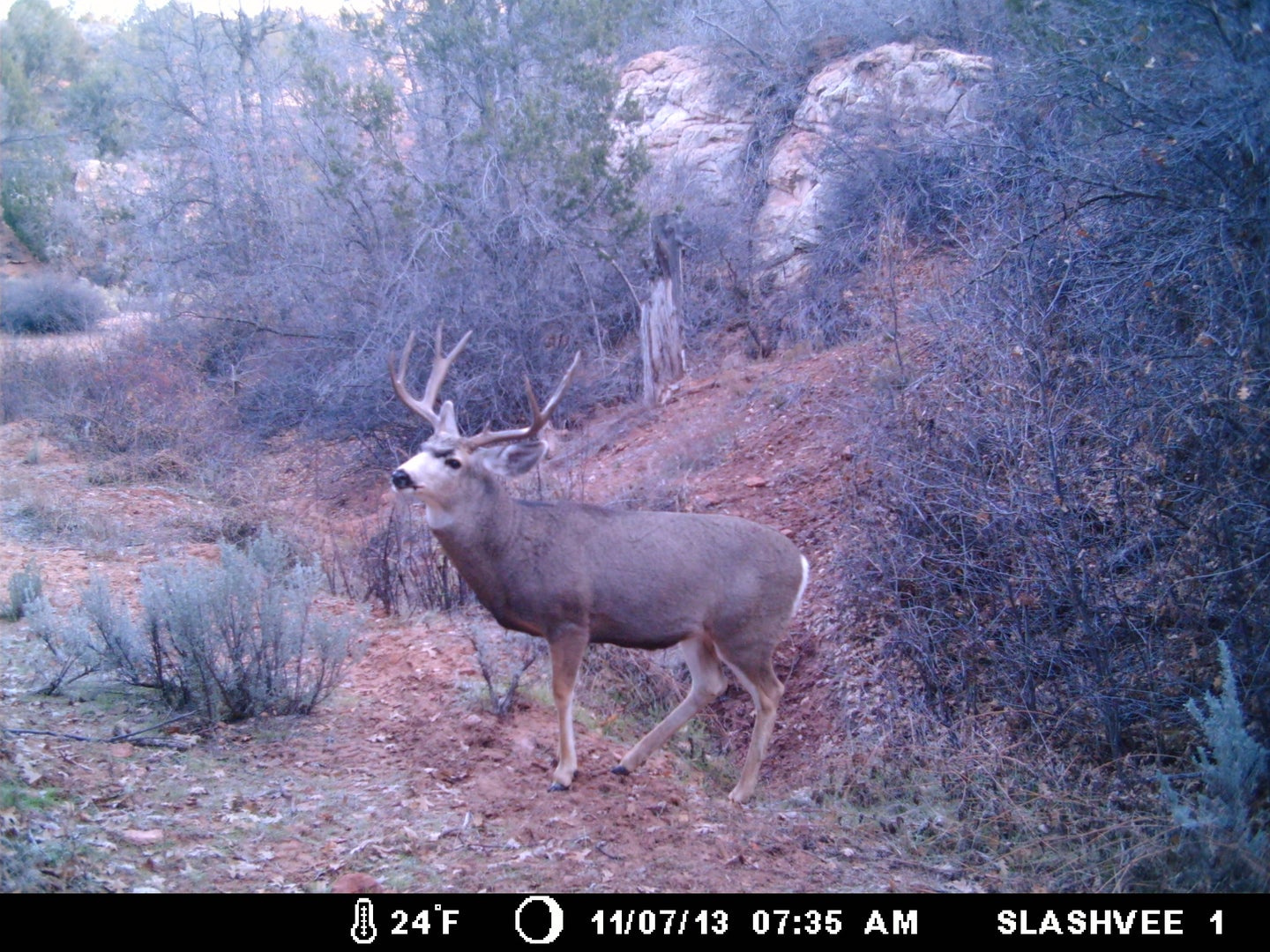 This Utah mule deer was caught on camera during the 2013 hunting season. slashvee / Flicker
SHARE

The Utah Division of Wildlife Resources is proposing a statewide ban on trail cameras during hunting season. The proposal would prohibit hunters from using trail cams to locate or monitor big game animals on public and private lands between July 31 and Jan. 31, and it would prohibit any sale or purchase of camera information for the purpose of hunting in the state.

The current proposal would also forbid hunters from using night-vision devices, such as night-vision goggles and thermal-imaging cameras, within 48 hours of any big game hunt. Included in the proposal are a few other, less controversial rule changes related to big game hunting in Utah.

“We feel that these new rule changes are in line with much of the public feedback that we received during our surveys, and that it will also help maintain a more sportsmanlike and ‘fair chase’ approach to hunting in Utah,” Covy Jones, the Division’s big game coordinator, said earlier this year.

By reopening its proposal to public comments last week, the DWR is essentially picking up where it left off this August—when members of the Utah Wildlife Board voted to postpone receiving public comments until the state’s wildlife biologists could get a better idea of how the hunting public feels about this technology.

To achieve this goal, the Division conducted a survey in October that asked more than 2,000 Utah hunters for their views on trail cameras, as well as their opinions regarding whether or not these cameras should be regulated by the state. Utah DWR’s Law Enforcement Chief Wyatt Bubak explained this survey and broke down its findings in a video that was released last Monday.

The survey found that just over half—or roughly 52 percent—of the respondents supported some regulation of trail cameras. Roughly 38 percent of them said that trail cameras should not be regulated in any way, and the remaining 11 percent were neutral.

The survey asked about internal-storage cameras versus cellular game cameras, which can instantly send photos and videos to electronic devices, like phones and laptops. It found that while roughly half of the respondents supported the use of internal storage cameras, more than two-thirds of them opposed the use of transmitting cameras during big game seasons. A similar two-thirds majority also opposed the sale and purchase of photos for hunting purposes.

“This is basically where an individual obtains a location data and a photo of an animal, and they sell that data to someone else,” Bubak said, adding that this practice has become increasingly common in the state in the past four to five years.

The survey touched on some other important issues, such as limiting the total number of trail cameras that hunters and outfitters can use at any given time, and deciding whether the regulations should be the same on both public and private lands.

Several states across the country already regulate trail cameras, and the use of cellular trail cams during hunting season is currently prohibited to some extent in Montana, New Mexico, and New Hampshire. Nevada has taken those regulations one step further by banning the use of all trail cameras on public land between Aug. 1 and Dec. 31. (The state still allows the use of trail cameras on private land.)

Read Next: Why Do States Have Such Different (and Obscure) Hunting Regulations? It’s Partly Because We Can’t Agree on What’s Ethical

Meanwhile, Arizona recently enacted the strictest regulations for trail cameras nationwide. The state’s newest rule, which goes into effect in January, prohibits the use of all trail cameras for scouting and hunting purposes year-round.

Utah’s recent survey pointed directly to the regulations that now exist in neighboring southwestern states. It found that while almost half of the respondents supported a trail camera rule similar to Nevada’s, only a third—or roughly 34 percent—of them supported a full-on, year-round camera ban like the one implemented in Arizona.

As Bubak explained, the DWR used these survey responses to help craft the regulations that were once again proposed last week. The Division is currently accepting public comments on this proposal and will continue to do so until midnight on Dec. 27.

The Utah Wildlife Board will then vote on these proposed changes in early January. If approved, the new rules will go into effect before hunting season begins in 2022.