The Yira Buck: A 190-Class Whitetail That Survived Four Years of Hard Hunting, Two Arrows, and a Car Accident

The Yira family spent more than 100 collective days chasing a legendary Wisconsin buck. It finally paid off during the 2021 rifle season 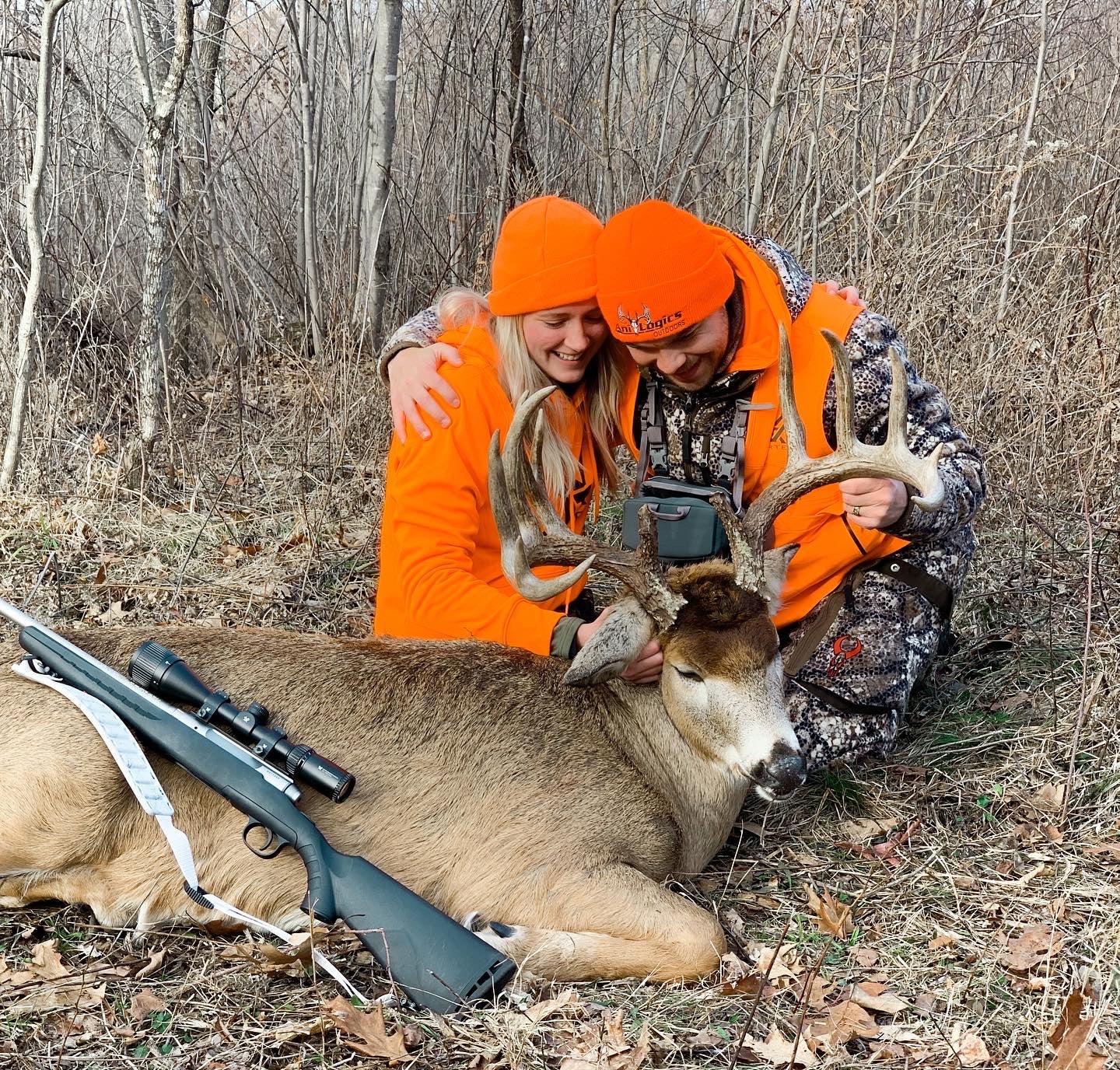 The Yira family are die-hard deer hunters. Greta and her husband Jordan spend a lot of time matching wits with mature whitetails, which is no easy feat. It takes grit, knowledge, and good fortune to outsmart old deer consistently. This season, after 100 days of hunting spread over four years, Greta Yira killed a 6½-year-old Wisconsin buck only a few miles from where the legendary Jordan buck was killed.

“This buck was a warrior, [shot] twice during bow season and hit by a car,” says Yira. “He was a local legend.” And so, they dubbed him “Hank the Tank.”

They had four years worth of trail camera photos of this buck. He eventually grew into a massive 13-pointer with the biggest body anyone in the Yira family had seen (Jordan’s brother and father also hunted Hank), but was a 10-point the first season the Yira’s hunted him.

“We knew he was something special,” says Greta Yira. “However, we noticed he had been hit in the neck by an arrow, which was confirmed by the neighbor. Not knowing the extent of the injury, we were anxious for gun season. After nine days of gun season, he went unseen, [with] no pictures of him either.”

The deer did not return in the summer or early fall of 2019. They assumed he died. Then, in mid-October, much to everyone’s surprise, Hank returned. They captured one trail camera photo of the buck. He was alive—and much bigger—sporting 13 points and a split G2.

“Knowing he was alive, Jordan made a game plan,” Greta Yira said. “He hunted this buck for over 25 days during archery season, and nine straight days with the gun, to only see a flash of him. He would appear an hour after shooting [light] each night of the gun season. The season closed and the waiting game began again.”

They kept tabs on the buck throughout winter, and when the 2020 season arrived, they knew his core area, and had a better idea where to target the buck. The Yira’s created more bedding areas and hung treestands closer to those locations. Near the end of October, the deer showed, and the hunt was on. He was still a 13-pointer and added even more mass and tine length.

“I was up to bat,” Greta Yira said. “I was so excited to be able to get out in the woods, and after just having our first-born [child], time was very limited. Knowing opening weekend of Wisconsin gun is usually the best, I had high hopes to shoot my first buck and even higher hopes to lay eyes on Hank.”

“I was beyond excited, and hooked to say the least,” she says. “I have gone with Jordan many times. But being the one harvesting the animal is better than I could have imagined.”

Jordan’s brother and father hunted the buck the rest of the gun season but didn’t see it. It was not on camera, either.

“We decided to do a walkthrough of the woods to see if we could find sheds or any dead heads,” Greta Yira said. “We found neither but did find a trail camera that Jordan forgot to pull earlier in the winter. Instantly knowing it was in Hanks’s area, we looked at pictures. Sure enough, we got him on camera in January and February [of 2021].”

Hank Gets Even Bigger…

Jordan and Greta went to work right away. They hung more treestands, trail cameras, and increased the number of food plots in hopes of creating more opportunities to encounter this buck. The Yira’s were expecting their second child in September and needed to get the work done well in advance of deer season. Fall arrived, and one day, while sitting at home, they received a cell camera notification. It was Hank. He had grown even larger than the year before.

“It was go time,” says Greta Yira. “Gun season was only a few weeks away and we knew this was his core area during the rut.”

But on the Friday before gun season, they received word that Hank was hit by a car. They were devastated. On Nov. 26, thinking Hank was dead, Greta and Jordan went out with intentions of filling her doe tag. It was sunny with high winds and temperatures in the 20s. They arrived at their box blind around noon and settled in for the evening. Their hunting spot is amidst rolling hills on a flat surrounded by ridges and a big bowl in front of the blind with thick timber and brush around it. Soon after arriving, they spotted a young eight-pointer. There was not much more movement until around 1:30 p.m. That’s when Hank stepped out, but Greta didn’t know it was him. After all, the Yira’s thought he was dead after hearing of the car accident.

“We were glassing and waiting for an opportunity to fill the freezer,” Greta Yira said. “Sure enough, 70 yards in front of us, I saw a glimpse of a huge-bodied deer behind brush. He took a few steps forward and I could not believe it was him. I could barely move.”

“Big buck,” she stuttered to Jordan.

Greta immediately grabbed her gun, settled the crosshairs, and took the 70-yard shot. She had already pulled the trigger before Jordan could even say,
“that’s Hank.”

The blast echoed in the bottoms below them, and the buck instantly disappeared. They were unsure of where he went, or what happened after the shot. So, Jordan climbed down to see if he could find him. After several tense moments, he raised his hands in the air and yelled back up at Greta with a smile.

“The emotions started,” says Greta Yira. “As soon as I walked up to him, I lost it. He was so incredible. Over 190 inches of bone. He was laid to rest right where we got our last picture of him on camera. He indeed did get hit by a car before gun season, and had a big, clubbed hoof.”

But the car strike wasn’t tough enough to kill Hank the Tank. The deer had become a master of evading death. Between Jordan, his brother, Brandon, his father, Mark, and Greta, they hunted the buck well over 100 times.

“This deer was a legend in the area,” Greta Yira said. “We had pictures of this buck hanging all over our house. Jordan was so obsessed with this buck he took off almost the whole month of November [from work] the past two years. We are beyond grateful to share the moment with family. We are going to be telling the story of ‘Hank the Tank’ for many years to come.”

“Hank was and will always be a legend in our home,” Greta Yira said. “It was such an amazing opportunity to harvest Hank the Tank with my husband Jordan right by my side. The amount of time and sleep lost over that buck made it all worth it. A true warrior and legend.”