Zack Grooms Was a Devoted Uncle and a True Duck Hunter 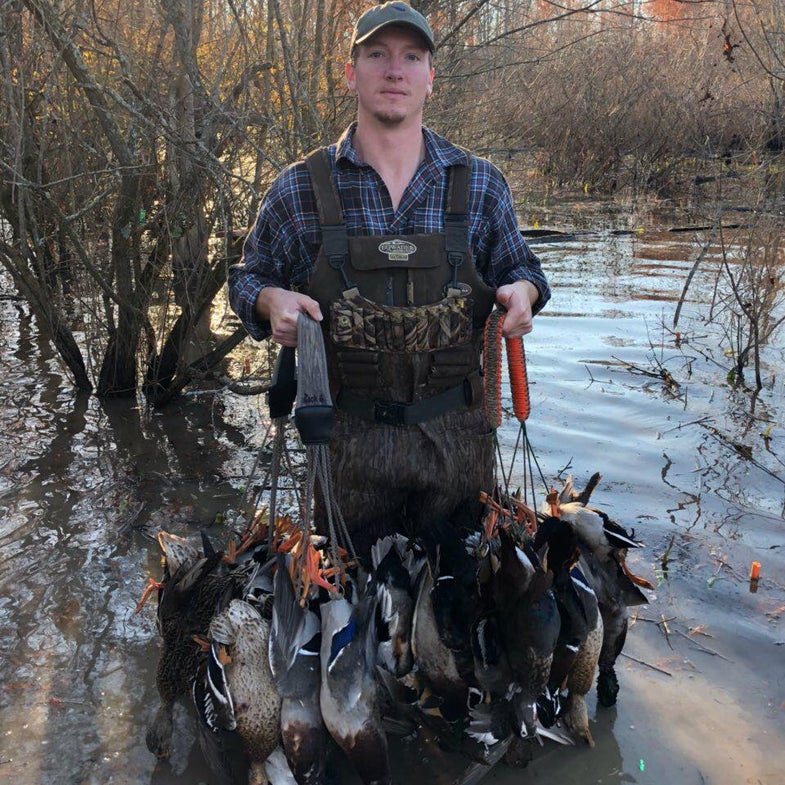 Zack Grooms spent many of his waking hours thinking about duck season. And by his reckoning, the 2020-21 season was going to be a good one.

His hunting buddies had drawn one of the top public blinds on Reelfoot Lake, and he’d be able to hunt most every day. Zack also had a new 16-foot jon boat with a 25-horse Tohatsu motor, and a 2016 Silverado to tow it. They weren’t brand new, but they were new to him, and he was proud of his set up. As the weeks unfolded, Zack and his buddies delivered on all that potential—their crew bagged more ducks than any season before.

On the last Monday of the season, all that fell apart. Zack Grooms was shot and killed in his duck boat. So was his close friend, Chance Black.

The Grooms family was left to sift through the shards of their 25-year-old’s life. Zack’s call lanyard was missing, presumably destroyed. But his mother was able to guess the 4-digit password on his iPhone, and save all his photos and videos. That included clips he had shared to TikTok of his hunt the day before, complete with winter lake views, steaks for breakfast, and a duck strap heavy with mallards. The post had been a giddy glimpse into one of the things Zack loved most in the world: a late-season hunt with his buddies.

When Ricky Grooms started to cut back on his time in the woods, his two sons didn’t miss a beat. With 11 years on his little brother, Petey Grooms stepped in and continued Zack’s hunting education. The two hunted a little bit of everything: small game, deer, and ducks. It was the foundation Zack needed to grow into the adept duck hunter he later became.

Toward the end of high school, Zack fell in with a group of duck hunters organized by buddy Chase Petty. If Petty is, by his own admission, the micromanager of the group, then Zack was the neat freak. He liked to keep the blind tidy, and everything arranged just so, from the decoy spread to the spinners. The fall after graduating from Greenfield High School, Zack wrote in a tweet, “I can’t think of anything better to do than be working on the blind and getting ready for duck season.”

“That’s the elite of the elite,” says Petty of their group of eight guys. “We don’t just let anybody come in. I mean, you had to know what the heck you was doing.”

LISTEN NEXT: What Really Happened to the Duck Hunters Who Were Killed on Reelfoot Lake?

And Zack knew what he was doing. Because when it came to duck hunting, he had many talents. Zack was a gifted caller, an excellent shot, and the best in the bunch at recovering crippled ducks. But persuading his black Lab, Avery, to retrieve in open water wasn’t one of them.

“He’d kill me for talking about his dog like this,” says buddy Reed Wright, 27. “But his dog was the worst duck dog ever.”

Avery loved to sit with the guys in their shooting holes rather than by himself on the dog ramp. When Zack tried to cast the dog from his boat, that didn’t work either.

“Finally, Zack just grabbed him and chucked him out in the water. And that dog acted like a cat when it hit the water—it was ready to get out. That’s the last time he brought Avery.”

Fortunately, it didn’t matter much, since Zack was such a good retriever himself. He could spot hard-to-see ducks floating on the water, and cripples trying to slip away. Wright remembers one day during the 2019-20 season when they were hunting a backwater hole, and a few guys piled in the boat to pick up birds. Zack, who was on the motor, kept running his buddies face-first into overhanging branches. Wright glanced back to find that Zack wasn’t even looking where he was driving.

“I Want to Do Right”

Like both his parents, Zack grew up in Greenfield, Tennessee. He was quieter than many of his classmates, taking in what was going on around him rather than clamoring to be heard.

“He was one that would help you do anything,” says his mother, Tina Grooms. “All you had to do was mention it, and he would go and help.”

But he was mischievous, too. Zack liked to fan the flames whenever one buddy started ragging on another, and that bold streak started young. Tina recalls one day when her older son, Petey, left the house to meet up with a friend down the street. Zack, who was barely two years old, unlocked the living room door when his mother wasn’t watching and crossed the state highway in front of their house. He’d nearly caught up with the two older boys when Tina spotted him. It was hard to miss the toddler in a diaper.

As a kid, she says Zack was full of himself—a confidence that served him well as he started playing on a travel baseball team when he was 10. He played basketball and football in middle school and pitched for the Greenfield High baseball team. Pitching earned him a scholarship to play for Bethel University in McKenzie, Tenn.

“He wasn’t getting much playing time, so he got a little discouraged,” says Tina of her son’s freshman year. “He came to find out his advisor’s husband was the archery team coach. And he went to her and he said, ‘I just need a change. Can I change?’…There were some open positions on the archery team, so he got on there and he just loved it. He loved it.”

As the team traveled around the country, Zack won some awards, including silver in the men’s bowhunter division at a conference in 2018. Zack felt at home on the archery team, in part because he found a friend and mentor in the head coach, Kenny Louden.

Zack wasn’t a high-strung competitor. Instead, says Louden, he was a laid-back guy and a big cut-up among his teammates. He loved to hunt and fish, and their mutual obsession with duck hunting cemented their friendship. Like many outdoorsmen who don’t know any other way of life, Louden can’t explain what it was about hunting that was so appealing to Zack. It was just part of who he was.

Louden is the preacher of a small Baptist congregation, so he holds church on Sundays whether he’s at home or on the road with his team. During one competition Zack’s senior year, Louden said a morning devotion as usual. The students competed all day and returned to the hotel late that night.

“Everybody else was packing up, and I noticed Zack was still hanging around. He was waiting for everybody else to leave,” recalls Louden. “He said, “‘Coach, I want to talk to you. What you said this morning, that touched my heart.’ He said, ‘I want to get my life right, I want to do right.’ He just wanted to be a good young man.”

The two men prayed together. Two weeks later, the Bethel archery team traveled to Foley, Alabama. Although Louden had planned to baptize Zack on the beach, it was getting dark, and neither was keen on the idea of lurking alligators. Instead, Louden baptized Zack in the swimming pool of the Hampton Inn where they were staying.

“Thank the good Lord of that,” says his mother.

Zack Grooms graduated from Bethel in 2018 with a degree in criminal justice and hopes of becoming a police officer. To earn some money in the meantime, Zack took a job with SMP Produce, where his older brother, Petey, worked. Grooms spent much of the growing season following the watermelon harvest, managing farm workers and brokering produce sales. He would start in Texas, say, then head to Florida, then Georgia, and wrap up the season in Indiana, where his buddies would sometimes join him to hunt doves.

When Zack wasn’t on the road for work, he lived at the rental near Reelfoot that he and his buddies shared each duck season. Sometimes he’d swing by his parents’ house for a day or two to visit, and to coax his mom to help him with his laundry. Zack would also make time to see his 8-year-old niece, Elly, and the two would joke and wrestle. Elly was there when Zack graduated high school, and when he brought his puppy, Avery, home.

“Zack and Elly had a bond,” says Tina. “He thought she was it, and she thought he was it.”

When news broke of Zack’s death, donations and messages poured in from all over the country. They were from close friends and family, and from complete strangers. Many were from the watermelon farmers Zack had worked with on the road.

“They were such nice letters, about how polite Zack was, and how good and hard of a worker he was,” says Tina. “It’s just overwhelming, the love and support that we’ve got. And it’s still going.”

The funeral for Zackery Paul Grooms was held on Feb. 1, 2021, the day after Chance Black’s funeral. Zack’s old archery coach performed the graveside service. While it’s never easy to preach at a funeral, it was especially tough for Louden to get through Zack’s.

“He was a young man, and he was just getting started in life,” says Louden, who spoke that day about Zack’s salvation, and his enthusiasm for the pastimes and people he cared about. “He loved the outdoors. He loved to live life. He loved to duck hunt. And he was my buddy.”

The small cemetery just outside of Greenfield was packed with all the mourners it could hold. To help mark the grave, Tina’s sister gave her a little fruit jar with a solar light inside and a scene of Zack hunting on the outside.

“They were both the best friends I could ask for,” says Wright. “Not another like either of them.”

Zack’s parents purchased four plots in the Hornbeak Cemetery outside of Greenfield. The cemetery is just one house away from their own, beside that same highway Zack bolted across all those years ago. The Grooms family thought it would be a comfort to have their son so close, but some days it’s difficult even to drive past.

Avery is nearby too, living with Zack’s parents. Sometimes the pup refuses to leave his doghouse. Other times he’ll stick to their sides like a burr, in need of reassurance.

Elly’s visits to her grandparents are quieter than they used to be. She won’t walk down the hallway that leads to the bedrooms, though Tina always makes sure to shut the door to Uncle Zack’s room. Tina can’t bring herself to change anything in Zack’s room just yet. Apart from the shoulder mount strewn with duck calls and baseball caps, it’s still tidy as could be, just the way he left it.

But even on the toughest days, when the sky starts to dim and Tina Grooms passes the cemetery on her way home, she can see the little light that hangs beside her son’s grave, shining into the night.

Editor’s Note: Zack Grooms’ name is misspelled as “Zackary” in most media reports and many official documents related to the Reelfoot investigation. The correct spelling is Zackery Grooms.