We tagged three bulls with three tags. Here’s what we learned and how it can help you on your next elk hunt 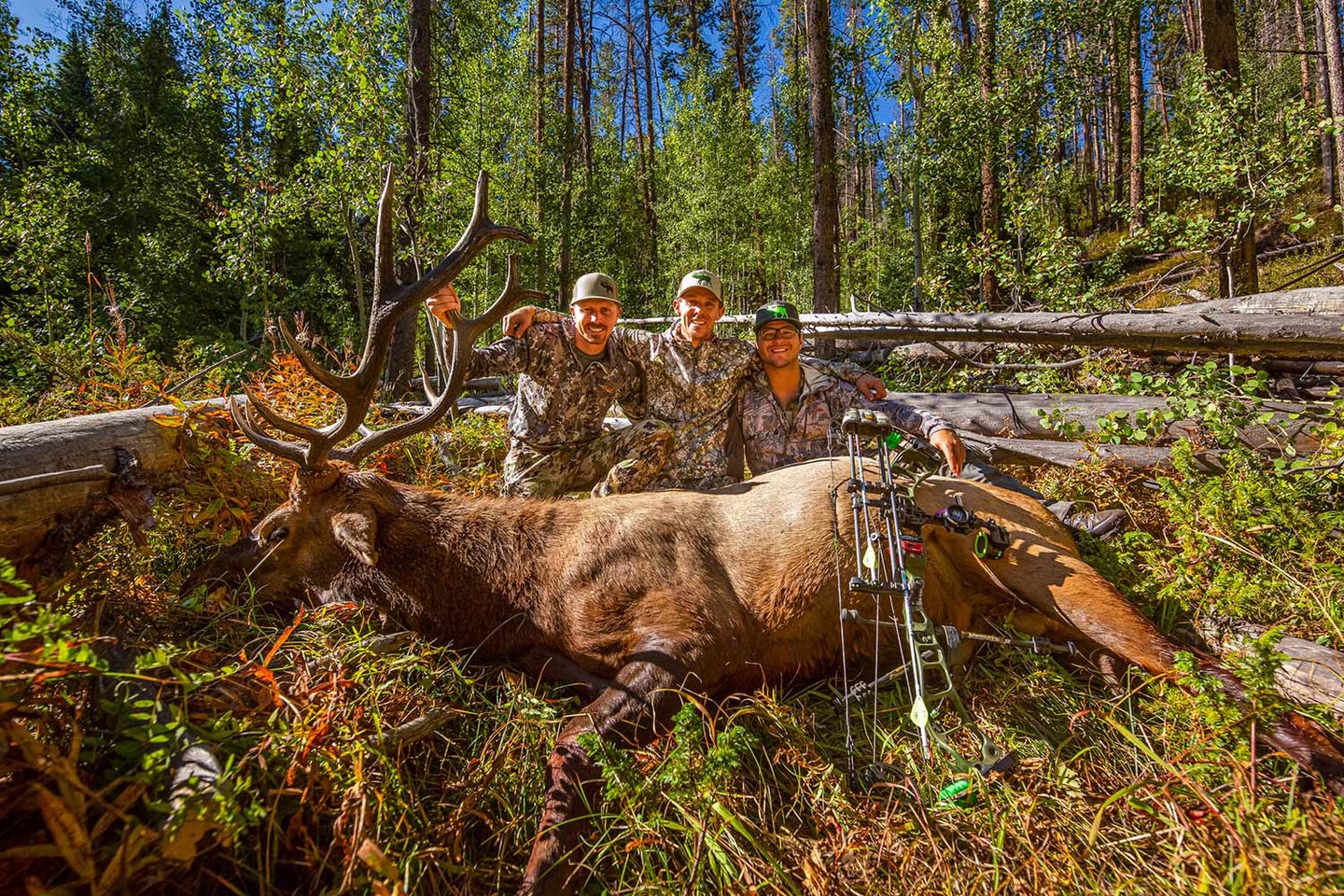 The mission was a Colorado/Wyoming public-land archery elk hunt with over-the-counter tags. There were three of us — two with Colorado tags and one with a stamp from the Cowboy state. Hunting on Colorado’s northcentral border was our best option, since it would cut down on drive time between states and give us more time in the field. The planning was done. Now it was time to execute.

By the time our Colorado camp was set on Friday, Sept. 10, it was 5:30 p.m and temperatures hovered in the upper 60s as mountain thermals were dragging cooling air down. We didn’t pack in deep like many other hunters do. Our method was to camp off main roads and dive into pockets that required a strenuous uphill climb or downhill scramble.

The first spot we’d has proven itself over the years. Once you learn an area and string together some hot spots, those spots should be revisited. My hunting partner, Royle, was up to bat first. I would be running the camera and working the Heads-Up elk decoy, and the elk maestro, J.C. Navarro, would be handling the calling duties. We love having a decoy out and ready. We hunt aggressively, and if a bull happens to pick us off on his approach, an-already-deployed-decoy will calm his nerves.

That first evening was quiet. We didn’t hear a bugle and the fresh sign of cattle along with horse tracks told us a recent roundup had taken place. Human pressure of any kind will move elk.

Be Ready to Bail

One thing we’ve learned, especially when chasing public-land elk in heavily pressured OTC units, is to not get married to a spot just because it’s produced in the past. Check it again? Possibly, but only if there’s a logical reason to do so. Time is precious. Don’t be afraid to strike out and look at new country.

So after our old go-to spot failed to produce, our day-two plan was to access a new-to-all-of-us area. We studied our onX Hunt App carefully and located some likely drainages that pressured elk would head to. It was late and we were tired, but the work wasn’t done. After a quick dinner, we jumped in the trucks and drove to our morning access point. We wanted to be sure no trucks were parked at the trailhead before us. There weren’t. Next, we drove to the main trailhead and located six vehicles. These hunters would likely move elk right toward us the following morning. It’s these little nuisances that make a big difference. Be willing to go the extra mile even when sleep sounds better. You have a limited number of days to get it done. You can sleep when you get home.

The morning of day two was a grind. Again, no bugles and lots of walking. Just as we were getting to the area we wanted to access, another hunter bugled above us. We didn’t get frustrated. That’s OTC public-land hunting, and good on them for pushing hard into an area. If you let other hunters dictate your emotions, you’ll be in for a terrible hunt. You can only control your attitude and your effort.

After walking out and regrouping back at camp, we decided to drive 30-plus miles to an area J.C. had marked on his onX weeks before the hunt. Being able to call an audible during the hut is another reason we don’t like to trek in deep and spike camp. Can it work? Of course, but we like to stay mobile. Remember, though, you can only stay mobile if you have pre-marked areas to bounce in and out of.

Though we spotted some camps and glassed a few hunters inching along ridgelines near the area we intended to hunt, our chosen area was vacant. We didn’t hear a bugle that evening, but we did find more than 100 fresh rubs, plus beds, greasy poop, and we called in a pair of curious spike bulls. We knew we were onto something.

Just because you don’t hear elk and don’t see any shooters, don’t write an area off. If the sign says elk are in the area, trust it.

That night at camp, just before we dosed off, a distant bugle tickled our ears. With each passing minute, the bull got increasingly vocal. Minutes later, another bull joined in. We sat in silence, just listening, for an hour. It became obvious the pair of bulls had crossed the main road just below our camp and moved into the same drainage Roy had hunted on the first evening. Boom, a reason to return.

The morning was a bust, but at 5 p.m. that evening, Roy’s favorite hole produced a bugle. The bull was way off, but that’s never a factor to us. If a bull bugles, we go to it. Many hunters would have set up right then and there — called to the bull repeatedly — refusing to move for fear of getting busted. Not a good idea. This bull was more than 500 yards away. The wind was in our favor and the terrain allowed us to move quickly. We wanted to press in about 300 yards, hit him again and take his temperature.

We closed the distance without problem. However, Roy’s next bugle was answered by a hunter. He was moving in from the main road. After sitting for 10 minutes and hearing the hunter bugle 20 different times, it was obvious he had zero intentions of coming in after us or the actual bull. The bull had gone silent, and so had we. The last thing we wanted was to call the hunter to us. Instead, we moved quietly up the next ridge and away from the bugling hunter. We figured the bull did the same. We were right. Upon topping the next ridge, J.C. let out a soft mew, which was answered with a deafening bugle. He was close. Less than 100 yards. Roy and I quickly moved into a shooting lane. Too many bowhunters hinder themselves by setting up behind cover. Get in front of cover and give yourself shooting options.

The second Roy knocked an arrow, I saw tines coming up the hill. I whispered to Roy that the bull was coming up from his left, and at a distance of 16 yards, Roy made good on his opportunity. Just like that, the hunt had gone from what seemed like mission impossible to the three of us celebrating and packing meat late into the night. If there’s one tip I can give to the public-land OTC bowhunter, it’s this: Never quit. Just keep going and good things will happen.

It was after midnight when we reached camp. Our bodies were tired, but the weather forecast told us the following morning would be the coldest of the trip. Sleeping in wasn’t an option. We were going back to the area with all the rubs and fresh sign.

Our legs ached, our backs were sore, and our eyes were heavy as we made the morning commute. No trucks were at the trailhead, and though the climb up the ridge was long, a fresh blanket of frost on the ground and the possibility of bugling bulls kept us pushing onward.

J.C.’s first bugle, a simple locator, earned an immediate response. The bull was close, but the setup was bad. The area was super dense. Shooting lanes were limited and piles of deadfall would discourage the bull from coming in. Keep these things in mind. Don’t be satisfied to get a bugle and setup. Unless the bull is right on top of you, get yourself in a position where you can execute a shot. If possible, get parallel with the bull on even ground.

Though the bull continued to answer, the sound of his cows moving up the mountain told us the game was up. When elk lose interest and start moving up a mountain, it’s awfully hard to catch them. Of course, we would have tried, but the back-and-forth between J.C. and the herd bull had caused another screamer to join the party.

The bull was below us, and though the timber was plenty open, Roy and I opted to creep in closer. Why? First, regular looks at our onX App told us the bull was down in a small drainage. It’s the little details, right? There was no way he would pick us off. Second, though he was answering calls, he wasn’t closing the distance. J.C. kept him talking and we moved in. This is a great tactic, especially when hunting a vocal bull that is reluctant to move.

We knew we were within 100 yards of the bull and had just stopped to check the wind for the umpteenth time. This is crucial. If you don’t have an odorless wind checker in your front pocket at all times, you’re crippling your hunt. Elk have incredible noses, but if you are constantly mindful of the wind, you can continue to keep the wind in your favor and avoid detection.

Read Next: 11 Mistakes Elk Hunters Make and How to Avoid Them

I’d just stuck my wind puffer back in my pant pocket and when I looked up, Royle was making a motion for me to draw my bow. Though I couldn’t see the bull, I did just that. If you’re hunting partner is telling you to draw, just do it. I’ve seen many should-have-been-killed elk spook because the hunter waited too long to draw.

Just as I hit my anchor, the bull popped into view. Roy and I were standing up, and a bit exposed, but we were in front of cover and I had a clear shot. Plus, Roy had the decoy out and ready. The bull was top-pin close, and I buried my arrow to the fletch in the grapefruit-sized opening about nine-inches above the sternum. Yes, I took a full-frontal shot, and it’s a lethal one. With that noted, I only recommend taking this shot if you’ve done a good study of an elk’s anatomy and you’re super confident in your equipment. I will not take this shot beyond 20 yards.

Public-land OTC elk tend to move to heavily timbered areas, and often when they come to investigate a call, they will simply stick their front half through cover. Being able to execute this shot is often the difference between meat for the grill and a sob story.

The bull ran 40-yards and stopped. He was in serious trouble, but he was still on his feet and I had a clear shot. I took it. Elk are massive creatures with an incredible will to live. Even if you know your first arrow was good, keep shooting if the bull is on his feet and you have an opening.

After a photo session and breaking the bull down and loading it in our packs, a glance at onX told us we were a mere 1,000 yards from the truck. How was this possible? Simple, the surrounding areas were receiving hunting pressure, and this little section contained a pair of deep, dark drainages, water and thick bedding cover. Again, having multiple spots like this marked before your hunt ups your chances of an encounter.

That was the end of my hunt. Duties at home called, but the following day I got a picture of a gorgeous 5×5 bull sent to my phone. J.C. had done it. Like mine, the shot was a frontal and the bull didn’t go 100 yards. Three public-land OTC bulls in six days. Not too shabby. You can do it too. Remember, it’s not rocket science. Don’t overcomplicate it. Heed the tips and tactics below.