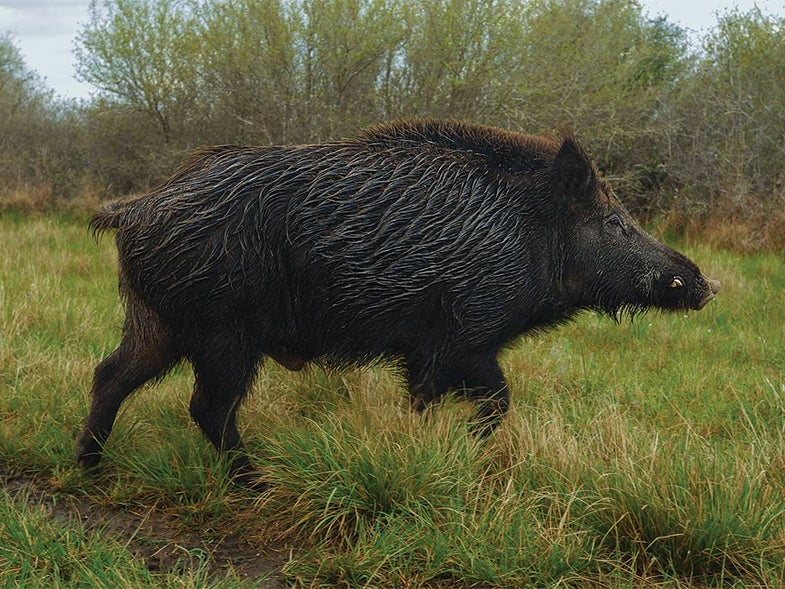 Big hogs are savvy hogs. They move most on the edges of daylight. Tosh Brown/Alamy
SHARE

It was just an hour into our all-night hog-hunting marathon, and I was nauseous. Half-empty Red Bulls and Monsters were parked in every cup holder of Brett Jepsen’s pickup, and the sweet stench of warm energy drinks hung in the Texas air. It was going to be a long night.

“Hang in there. It’s the stalking and the shooting between the driving and spotting that makes you forget all about being sick and tired,” said Jepsen, co-owner of Three Curl Outfitters in Midlothian, Texas. “Pigs are smart, but ARs with thermals are too.”

In those places where wild hogs are taking over the countryside, hunters and land managers say that 70 percent of feral hogs must be killed each year to simply keep their numbers stable.

Thermal-imaging riflescopes and spotting scopes are playing an increasing role in the hog-control efforts of hunters and guides like Jepsen. Although the optics, which are capable of detecting heat sources up to 2,000 yards away, are expensive, their superior image quality, long-range applications, and target-acquisition capabilities make them preferable to pricey night-vision technology, which needs a light source to function.

“We’ve been using thermals on our ARs for three years,” said Jepsen. “From February to December 2015, we killed more than 500 hogs. But it doesn’t necessarily make hunting wild pigs easy.”

They Come Out at Night

The latest research from the Texas Parks and Wildlife Department estimates that there are currently more than 2.6 million feral pigs in the Lone Star State—the highest population in the country. So I was puzzled that we didn’t see a single ranch-field pig anywhere during our daylight rides through Midlothian.

“Most of the year, pigs just aren’t that active during the daytime,” said Jepsen. “Add a little hunting pressure and they become almost totally nocturnal.”

But the night is long, and the amount of damage that a sounder of hogs can cause is amazing. Farmers will plant a cornfield in the morning and that night, pigs will go straight down the rows and eat every kernel. Fields might need to be replanted several times. The task during our two-day hunt was to eradicate as many seed-corn eaters as possible. Our firearms of choice were Palmetto State Armory (PSA) AR-10s in .308 Win., topped with Pulsar Trail XP50 thermal scopes. To spot the nuisance hogs, we were also equipped with Pulsar Helion thermal monoculars. Though I’d hunted predators many times with spotlights and night-vision gear, my first thermal-optic hog hunt was a wholly unfamiliar experience—from pounding energy drinks to scouting sounders to the upright, walk-right-at-them stalks.

It was close to midnight by the time Jepsen, his partner Charles Spiegel, and our group of five converged on a freshly planted field filled with 15 to 20 pigs.

“Here’s how this is going to work,” Spiegel whispered. “Everyone needs to follow me, single file. We’ll go as quietly as we can. I’ll be watching the pigs through my monocular until we get to within 50 yards or so. Then we’ll spread out while staying within 5 yards of each other. Get on the shooting sticks and we’ll count it down. Guys on the left shoot the pigs on the left and the guys on the right shoot the pigs on the right.”

I quickly settled the AR on the shooting sticks and was startled by the image I saw through the display. A sounder of hogs, stark black against a gray foreground, fed along, unaware of our presence—at least for the moment. A commotion of fleeing pigs came seconds after Spiegel’s countdown hit zero and continued for 30 seconds afterward. Three dead hogs were left behind when the clouds of hoof-roused dirt cleared.

“They only stand still till the first gun goes off,” said Spiegel. “Then you’re trying to hit runners. Not a simple thing.”

Shifting breezes and two blown stalks ended the night at 4 a.m. The pigs were tough indeed.

“While thermals are great, they’re definitely not a cure-all for things like bad wind direction or a full moon,” said Jepsen. “Pigs may not have great eyesight, but you’re not going to do a stalk like we did if there’s a full moon. They’ll spot you and be gone. Then there’s wind, scent, and hunting pressure. Stalking according to wind direction is key, and I have yet to see anything that truly works to get rid of your scent. And you’ve got to keep in mind that pigs don’t react well to being shot at either. They’ll pick up on your patterns very quickly and either come and go at different times or move off to another farm completely.”

Rotating hunting locations regularly according to seasons and to alleviate hunting pressure is critical for successful pig hunting. Cornfields and soybean fields, for example, can be hotspots from spring until early summer, but when the height of the crop obscures hogs, it’s necessary to shift to freshly cut fields.

“We switch things up tactically, too,” said Jepsen. “We use feeders, attractants, and motion lights in a lot of our hunting spots, and we’re careful to never shoot the same fields too often.”

Fifty-five-gallon drum feeders are set up for both stand-hunting and to concentrate hogs for stalking hunters armed with thermals. Feeders are timed to distribute a mixture of soybeans and corn just prior to sundown.

Experimentation with a relatively new attractant product called Hogs Under the Influence ($15; robinsonoutdoors.com) has also been promising when mixed with feed.

“I was ready to call bull on it,” said Jepsen. “But it’s worked well for us. It’s supposed to attract pigs and then calm them down and keep them near your bait. It seems to do exactly that.”

Illuminator light systems are also deployed at each feed site. A motion detector, activated by feeding pigs, gradually powers up a pair of red and green lights that are fixed to the bottom of each feeder. The slow intensification to full power prevents flash-spooking the unsuspecting pigs. ($140; terminator.com)

“If it’s a new feed location, we add packets of strawberry gelatin or Kool-Aid to the feed,” said Jepsen. “The sweet smell seems to attract them more quickly. Anyone need a Red Bull?”

If you go: Pig hunts begin at $200; guns with thermals are available; threecurl.com.

Hog Hunting: Where to Kill Wild Public-Land Pigs in the South

Thermals at a Glance

Although prices are easing somewhat, thermal-imaging scopes and spotters are expensive. Here are several of the most popular:

The Thor series of ATN units is available in eight different variations, which feature ballistics calculators that can take into account wind speed, range, and incline. ($2,000–$6,000; atncorp.com)

When I visited Pulsar headquarters in Mansfield, Texas, shipments of Trail thermal riflescopes had just arrived. There are five models in the Trail line, including the top-of-the-line XP50 (1.6X to 12.8X magnification), which boasts heat detection up to 2,000 yards. Key features: on-board video recording, smartphone tethering, rangefinding capabilities, and various contrast modes. ($3,080–$5,500; pulsarnv.com)

The Pulsar Helion thermal monocular was our go-to surveillance device. It, too, is a user-friendly thermal with straightforward controls, on-board video recording capabilities, eight hours of battery life, and heat detection up to 2,000 yards. ($2,500–$4,400; pulsarnv.com)

A new player in the thermal game is Trijicon, which rolled out a full line of riflescopes, clip-on optics, and monoculars in 2017. The REAP-IR Mini Thermal is a gem for nighttime hog and predator hunters. ($6,000–$10,000; trijiconeo.com)