Is there such a thing? 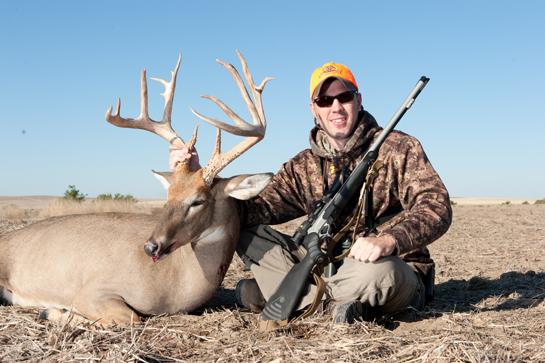 Chad Schearer wasn’t at all surprised when his wife, Marsha, made a perfect shot on an antelope at 239 yards last fall. What might come as a shock to some hunters, however, is that she did it with an in-line muzzleloader. Schearer himself has taken numerous game animals with the same CVA Optima Elite at ranges of more than 200 yards, including a 60-pound Austrian chamois, a small mountain goat, from 217 yards.

Twenty years ago, if you could shoot a 4-inch group from a muzzleloader at 100 yards, you were doing well. Now, match shooters and hunters have entered a new era in which long-range killing shots are becoming the norm and a tight three-shot group at 200 yards doesn’t merit a second look. Some shooters are even drilling targets consistently at 250 yards, which gives them a real advantage in states where deer hunters are limited by law to muzzleloaders or slug guns.

“There are three variables that affect bullet performance–the powder, the bullet and the gun itself,” says Mike Mattly, marketing manager for Knight Rifles. “All three have seen huge improvements since they were first introduced. Of course, none of that matters if the person using the gun can’t shoot well, but assuming he can, those three things are all factors.”

Schearer, who is CVA’s director of media relations, says that for most hunting situations where shots less than 100 yards are standard, it’s not critical to fine-tune a rifle so it can peg a quarter at 200 yards. But sometimes a long shot is all you get, and you need to be prepared if you want to take it.

Pelleted powder became a popular alternative to loose powder when Pyrodex introduced solid, premeasured pellets in 1997. Each pellet weighs 50 grains, giving shooters the option of pushing a bullet with 50, 100 or 150 grains of powder. For most close-range hunting or shooting situations, pelleted powder is a welcome and convenient option, but it has its drawbacks. Mattly says most guns perform best with a specific powder load, something that often can’t be achieved with premeasured pellets.

“The best load for your gun might be one hundred fifty grains, but then again it might be one hundred forty grains. I prefer to have the freedom of changing the load incrementally–say, by ten grains. That’s what a lot of match shooters do, although some will actually experiment with five-grain increments until they hit the right load,” he says. “By shooting with different powder loads, you can find out which one performs best for your gun. The difference in accuracy between one hundred thirty and one hundred forty grains of Triple Seven [granulated black powder] at two hundred yards can be enormous.”

The other drawback to powder pellets, adds Mattly, is that they don’t fit tightly in the barrel. That space around the pellets reduces pressure and the ignition rate of the powder, causing inconsistencies that ultimately affect accuracy. Both Mattly and Schearer agree that loads with more powder tend to shoot better than those with less powder, because hotter loads give you more velocity and better bullet stabilization. However, Schearer warns that too much powder can create drag on the bullet as it travels down the barrel.

“We experimented with all sorts of powder loads for a fifty-caliber, and we found that there is a point of diminishing return when you go above a certain amount of powder. We did gain velocity with loads above one hundred fifty grains, but the bullet started going all over the place,” explains Mattly.

Just as modern powder components have helped increase muzzleloader performance, advances in bullet design have improved accuracy tremendously. Prior to sabots and belted, copper-plated bullets, in-line shooters were limited to round balls and cast-lead bullets. Neither was remarkably accurate. Newer bullets, however, are tack drivers when fired out of in-lines.

Many shooters don’t like using sabots because they can be tough to push down a barrel, but they form a tighter seal than loose bullets, which prevents gasses from escaping around the bullet as it travels through the barrel. Mattly recommends sabots with thin petals, which open faster after leaving the barrel, permitting the bullet to travel downrange unhindered by the plastic sabot. Schearer favors Power Belt belted bullets, which slide down the barrel with only a light push on the ramrod.

“The problem with sabots is they are almost impossible to seat after the first couple of shots,” Schearer says. “I hear that from a lot of shooters who feel like they need a hammer to beat the bullet down the barrel. That can lead to short-loading, which means the bullet isn’t seated all the way down the barrel. That can result in inconsistent pressure, which affects accuracy.”

While they disagree on bullet styles, Mattly and Schearer agree that heavier bullets tend to shoot more accurately. Mattly prefers Barnes muzzleloader bullets between 275 and 300 grains for .50-caliber rifles. The bullets are actually .451 caliber and are longer than most muzzleloader bullets. Longer bullets stabilize better, says Mattly. Schearer likes 275-grain .45-caliber Power Belts. He says the .45 has a higher velocity and a flatter trajectory than larger bullets, offering better long-range accuracy.

In the race to make a better muzzleloader, gun manufacturers have given hunters the same components they demanded on their centerfire rifles: crisp, reliable triggers, comfortable stocks and high-quality barrels. The result is out-of-the-box accuracy.

“The biggest improvement in in-lines during the last ten years has to do with the manufacturing process of the barrels. Everything is high-tech now. The barrel walls are uniform, the rifling is dead-on and there are fewer variations from barrel to barrel,” Schearer says.

Knight’s Long Range hunter has a free-floating barrel (a feature cherished by centerfire rifle shooters because of its high accuracy) and an adjustable trigger. Consequently, Knight guarantees that the Long Range Hunter will produce three-shot groups of 4 inches at 200 yards. That’s accuracy even Daniel Boone would appreciate.