LabRadar is an easy-to-use, but (slightly) finicky, chronograph 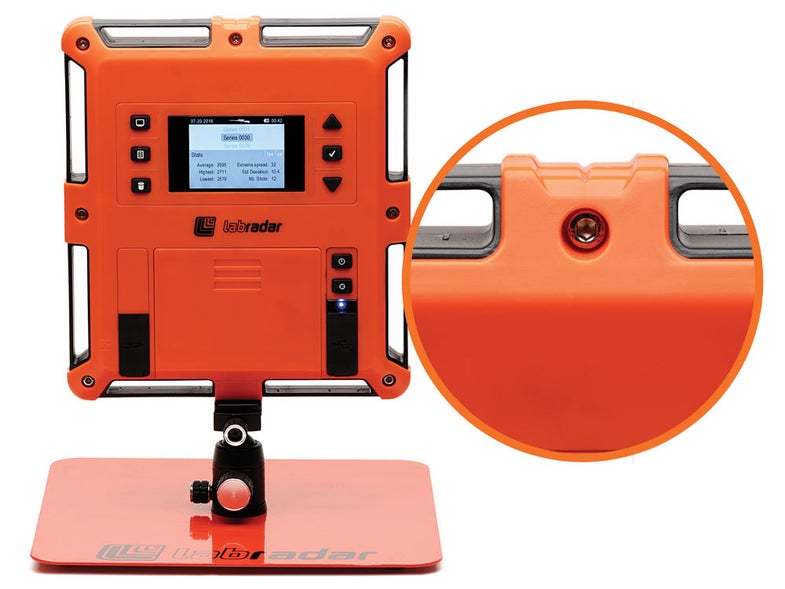 The notch on the top of the LabRadar is used to align the unit with the target. Bill Buckley
SHARE

For any shooter who has messed with traditional chronographs, the promise of the LabRadar is easy to see. It has no sunscreens to fool with, no wires to untangle, and no tripods to deploy, and there’s no need to cross the firing line to set it up. (To say nothing of the fact that you’d have to be a next-level knucklehead to accidentally shoot it.)

The LabRadar consists of two pieces: a main radar unit and a mounting plate ($540 and $60, respectively). Attach the two, aim it at the target you’ll be shooting, hit the power button, and you’re in business. Well, almost. There’s some fiddling required to operate the unit smoothly, but before we get into that, let’s answer a basic question: How does it work?

The LabRadar tracks projectiles to about 80 yards or so, giving you velocity readings at distance intervals you input into the machine. It also displays muzzle velocity, kinetic energy, extreme spread (ES), standard deviation (SD), and minimum and maximum velocities. The data is saved on a USB card in a format you can download into a spreadsheet.

But it has some drawbacks. The unit is fragile, and unless you take precautions, it can overturn easily in the wind, and even a short fall will break it. It runs on six AA batteries, but goes through them like a plate of nachos on Super Bowl Sunday. Plan on carrying extras or running it from an external USB battery.

The LabRadar is also particular about where it needs to be placed in relation to the muzzle of the gun. If you shoot with a suppressor, you often need to place the LabRadar in front of it. With a muzzle brake, you need to protect the unit from the blast, using either some kind of barrier or positioning it with the muzzle well forward of the unit.

I’ve found that repositioning the unit in relation to the muzzle during a shooting string affects results. For the best data, you need to keep your muzzle position consistent­—otherwise your ES and SD will open up. When I cross-checked the LabRadar’s results against those of my other chronographs—an Oelher 35P and a MagnetoSpeed—the readings varied by just a few fps, but the measured velocities were consistent with respect to each other.

In short, LabRadar is a powerful tool for the technically minded shooter who wants to amass lots of good ballistic data with minimal fuss.