The Mossberg Patriot Predator is a Poor-Man’s Sheep Rifle

A tough, accurate 6.5 for rough work 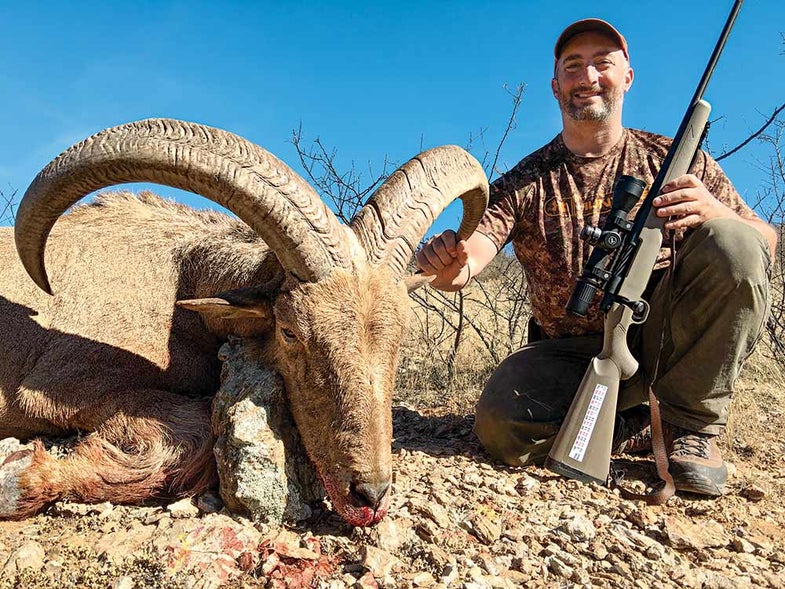 The Chinati Mountains in West Texas are the very definition of hardscrabble. The ragged rocky heights, interspersed with thorny yucca, honey mesquite, cactus, and rolling hills covered in dry, brittle grass, make for tough going. One transplant to this high-desert terrain that has thrived, however, is the aoudad. Also known as Barbary sheep, this rugged animal is native to the arid mountains of North Africa, and it took to this region of the Southwest without missing a beat. Because they are plentiful, and hunting them doesn’t involve the astronomical costs associated with bighorns and other high-dollar mountain game, aoudads are often referred to as the poor man’s sheep. However, as anyone who has hunted them can attest, the experience of stalking them is anything but poor. You have to come prepared to hike for miles up and down boot-shredding ground in order to get close to these wary creatures. If your legs and lungs aren’t in shape beforehand—to quote the ski instructor from Southpark—you’re gonna have a bad time. For this working man’s hunt, I chose a consummate workingman’s rifle—the Mossberg Patriot Predator. With an MSRP of just $441, it is an affordable bolt gun with several useful features that increase its utility without jacking up the price. It’s also built to take the kind of beating an aoudad hunt is going to dish out.

The Predator is offered in three chamberings: .308 Win., 6.5 Creedmoor, and .243 Win. All come with a threaded 22-inch barrel and are equipped with a durable tan synthetic stock.

I went with the 6.5 Creedmoor, which I would rank first among equals compared to the .308 and .243—though all are well-balanced and mild cartridges for big game.

As we’ve come to expect from the 6.5 Creedmoor, the accuracy of the rifle was excellent. With the 140-grain Nosler Ballistic Tips I took on this hunt, it had no difficulty maintaining sub-MOA groups. Unscoped and empty, my rifle weighed 6 ¾ pounds.

The rifle comes with a Picatinny rail to mount optics, an oversize bolt handle to work the smooth two-lug action, and a detachable box magazine made of polymer that holds five rounds. It also has an adjustable trigger with a center-tab safety that broke at 2 pounds 12 ounces right from the factory. That trigger pull weight is just where I like it, so I left it as is.

I’m a fan of all of these features, though you could argue about whether a detachable box magazine has any merit over a hinged floor plate, other than that it is easier to misplace.

To boost the rifle’s visual appeal, Mossberg machined bright spirals into the otherwise dull black bolt body, and added some shallow fluting to the barrel.

Admiring the rifle was the furthest thing from my mind after Steve Jones and I spotted a huge herd of aoudads on a distant hillside. The herd numbered at least 200, and picking out the best ram was difficult with the animals bunched up.

We tried to get closer, but they spotted us as soon as we had spotted them, and the race was on to get into a decent shooting position and select the right one. I ran up to a rocky bluff overlooking a defile the animals were filtering through. The trail they followed narrowed and had a small switchback that put each animal broadside for a brief moment. We found the largest of the curved horned rams, and I got ready. At more than 400 yards, however, the shot was iffy, and the big ram flew through the gap as though he knew my crosshairs were on him.

We picked up and followed them for more than 4 miles across some truly hellish terrain. Jones, who heads up Backcountry Hunts (backcountryhunts.com), kept us on their tail, but stalk after stalk turned into a bust. Fooling that many eyes seemed hopeless.

We dropped back a bit and let them disappear over a ridge. The December day wasn’t hot, but the herd slowed down to rest, and we were able to creep to where we could see the animals. The big boy was bedded down, and we waited an hour before he finally stood up at 200 yards. After the shot, he dashed over the next hill with the rest of the herd in tow. He didn’t make it far, however. His blood trail was easy to follow, and I soon found him piled up in the cactus and rocks. I marveIed at his size. I could barely get my hands around the heavy bases of his 31-inch horns.

A couple of days prior, I had used the 6.5 to take an excellent Carmen whitetail, which is a tiny deer not unlike a Coues deer, though with an even smaller body. Hunting Carmen whitetails is an optics-intensive task, one that will test your eyesight and your patience. After several days of fruitless searching, Jones and I finally located a good buck feeding on a hillside dotted with Texas cedars just after first light. We watched the buck from about a quarter mile away when he disappeared behind one clump of trees and didn’t reappear. So we waited. And waited. And waited.

After an eight-hour vigil that included a lot of scanning through my 15X binocular to make sure he wasn’t sneaking off through some unseen draw, the heavy buck walked into the open.

The approach of a rival male is what had gotten him out of his bed. The interloper was cruising for does, and my buck wasn’t going to tolerate the smaller newcomer. He stepped out into the open and squared off with the other buck. With the rut just starting up, this was exactly the kind of action we had been hoping for.

I didn’t give them a chance to fight it out. I’d had all day to prep for the 400-yard shot, and once the buck stopped, a single bullet from the accurate 6.5 took him down.

We hiked across the draw that had separated us, field dressed him, and carried him out as the sun set over the landscape.

It is a good time to be a cheapskate rifleman. We have lots of inexpensive long guns to choose from that deliver excellent performance. But I don’t think there’s a tougher big-game rifle than the Predator for the price.