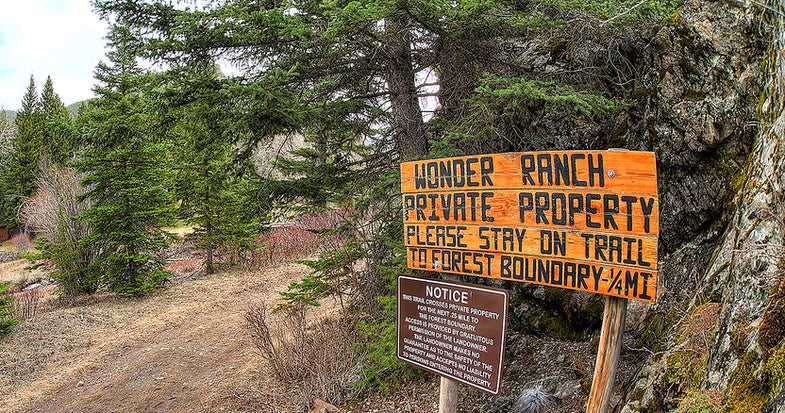 The public will be able to access the Indian Creek Trailhead and the Lee Metcalf Wilderness thanks to a new court ruling. Musgrove, via @Flickr
SHARE

The Forest Service moved to close an informal target-practice area on the Mt. Baker-Snoqualmie National Forest in western Washington after complaints of unsafe shooting and mounds of “trigger trash” left behind. The emergency ban will be in place for one year as the agency develops a plan to resolve the conflict. Martie Schramm, the local district ranger told the Seattle Times: “The amount of trash being left behind, the amount of destruction occurring to the natural environment as well as an overall public safety concern — that caused us to close the location to target shooting.”

The U.S. Forest Service manages some 193 million acres of public land, most of it wide open to hunting and shooting. However, local land managers have the authority to close areas that are subject to abuse or unsafe shooting.

Shooters can prevent similar conflicts by have simple commonsense and courtesy, outlined here.

Hunters, anglers and other outdoor enthusiasts chalked up a victory in the courts regarding public access across private ground in Montana’s Madison Range.

The 9th District Court of Appeals in San Francisco upheld an earlier ruling from a lower court that said that the public had traditional access rights across 80 acres of private land called the Wonder Ranch LLC. That private owner had sought to close the Indian Creek Trailhead to the Lee Metcalf Wilderness, near Ennis.

In 2014, the private landowner had sued the Forest Service to close the trailhead, saying that past landowners had given permission to cross the ground, but that did not constitute a public easement. After a trial, a local federal judge disagreed, and now the appeals court confirmed that decision.

It’s important to note that the easement does not give the public any right to use or hunt on the land, but merely respectfully cross it on the way to national forest.

The Rocky Mountain Elk Foundation has been hard at work securing access and habitat projects both east and west of the Mississippi River.

A collaborative effort by the Rocky Mountain Elk Foundation and the Pennsylvania Game Commission helped secure habitat in Elk County’s Benezette Township which boasts the highest elk population density in the state.

While today elk are commonly associated with the Rocky Mountains, historically elk roamed across most of North America. Thanks to hunter-based restoration efforts, elk are regaining ground in states like Pennsylvania.

The Woodring Farm II project entails 37 acres and is the newest addition to State Game Lands 311. It is the 13th RMEF land protection and access project in Pennsylvania.

“We appreciate our partners at the Pennsylvania Game Commission as well as RMEF members and volunteers for their continual support.”

Meanwhile, elk, deer and bighorn hunters stand to benefit from another RMEF project in southwestern Montana.

Rocky Mountain Elk Foundation worked with a conservation-minded family to secure 960 acres of elk habitat in near Dillon. In addition to providing public access to the property, the project also greatly improves access to surrounding national forest and Bureau of Land Management Land.

“We appreciate Jerry and Linda Grow for recognizing the wildlife values of their land and reaching out to us to both protect it and open it to public access,” said Henning.

RMEF now holds the property and will keep it open to public access until conveying it to the BLM, expected to happen later in 2018.

The property is big game winter range, supporting hundreds of deer and elk. Until a recent disease outbreak, it also supported bighorn sheep. The Montana Department of Fish, Wildlife and Parks is considering bighorn restoration effort there.

Since 1906, the Antiquities Act has given the president authority to declare parcels of public land as monuments to protect artifacts, landmarks or other special features. Generally, national monuments are open to hunting and fishing per state regulations, but industrial uses such as oil and gas are limited.

The law was instrumental in protecting some special places such as the Grand Canyon. Some western lawmakers have chaffed under the law, saying it gives too much power to the president. Lee’s bill will make national monuments subject to Congress and state legislature approval, making national monuments much more slow and cumbersome to put in place.

In a speech earlier this summer, Lee made it clear that he has a long-term goal of turning over federal public land (like national forests and Bureau of Land Management land) away from the American public to individual states. This rubs many hunting and fishing groups the wrong way, as those public lands have historically supported millions of hunters and anglers. States have a long history of selling off federal land when they are deeded to them.

Lee acknowledged that his vision was too ambitious to achieve in a single piece of legislation, outlining several bills to move toward it.