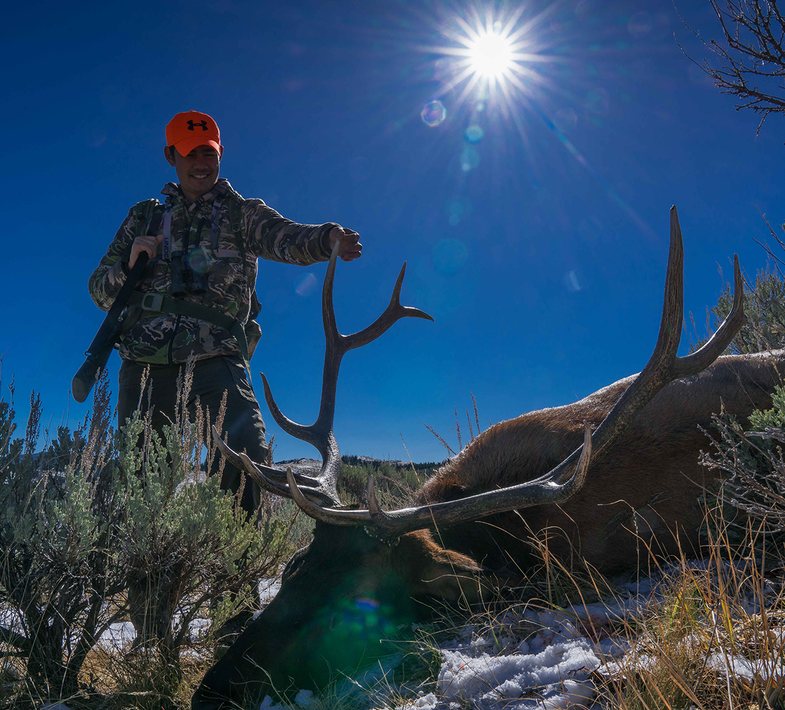 I was certain the bull wasn’t going to show. It was the very first morning of the Wyoming rifle season and we were only a few hours into the hunt. My guide Dennis Cease (Rough Country Outfitters) had spotted a group of elk only moments after we pulled off the highway and crossed the cattle gate into the ranch. We spent the next few hours hiking to get above the herd, which we expected to be run by a large bull, but by the time we were settled into shooting position with the elk somewhere in the timber below us, the big bull still hadn’t appeared.

This seemed appropriate. Just when you are certain you have the elk figured out, they do the opposite of what you expect.

But Cease, a retired undercover agent who was accustomed to waiting for his prey to make a false step, wanted to stay put. The hope was that the bull would eventually push his harem out of the timber, up the ridge, and into rifle range. All morning the bull had bugled from the timber while we circled around the herd. Through binoculars we could see smaller bulls and cows, but we could never spot the bugler. Now he had gone quiet.

We were perched at the top of the ridge in a boulder outcropping with 30 mph winds gnawing away at us. The view from our hide was spectacular. The mountain rolled away from us into snow-white aspens and then down to a huge sage flat. This was cattle ranching country, not the high-altitude backcountry that you must fight all day in order to glass elk below you. We were only a few miles from the pickup but the hike had been just steep enough to remind us that we were, in fact, elk hunting.

For the morning I was joined by videographer John Whipple and Jed Larkin of Under Armour. We all glassed through our binoculars and camera lenses hoping to catch a glimpse of antler in the quakies below. Cease insisted it was only a matter of time.

And sure enough, another bugle screamed up through the timber. The bull sounded closer. Soon cows started appearing below us. Then came two younger bulls feeding their way through the aspens. A few cows grazed in our direction closing the distance to only 50 yards. But the wind stayed true and blew straight in our faces. The elk never even looked up. Cease instructed us to stay tucked behind the rock face as more elk filtered into the open.

Then Cease grabbed me by the shoulder and pointed to the left. “That’s the bull you want to shoot,” he said. The herd bull had slipped out of the timber and was standing broadside only a 130 yards away.

The bull was feeding calmly and I wanted to check to make sure the camera guy was on the right elk, but Cease had waited for long enough. “There he is, right there. Shoot that bull,” Cease whispered with rising urgency.

The first shot hit behind the shoulder and sent the bull trotting uphill, scattering cows around him. Soon the whole herd of 100-plus elk was pouring out of the timber and running over the ridge. Amid the chaos, we were able to spot the bull again and when the other elk cleared around him, a second shot dropped him in his tracks.

He was a solid 6×6 bull and the largest I’d ever killed. And, he was the biggest and oldest bull in the herd, which was just what we were after. Cease had us kneel around the elk while he said a quiet prayer of thanks for the hunt, the bull, and the companionship.

A couple other hunters from camp, Mike Schoby of Outdoor Sportsman Group and Adam Weatherby (of Weatherby), hiked up to meet us and help pack the animal out. I’ve been a part of some bad packing missions—long distances, late into the night, headlamps and spirits dwindling—and this was not one of them. We had the bull quartered and off the ridge in a just a couple enjoyable hours.

The best part about tagging out early was that I got to join along for other hunts during the week. Each hour of hiking, glassing, and waiting was reminder of just how lucky I was on that first morning.