Photos from the Squirrel Master Classic 2017

Many of us started out on a BB or pellet gun and graduated to small game like rabbits and squirrels. … Continued 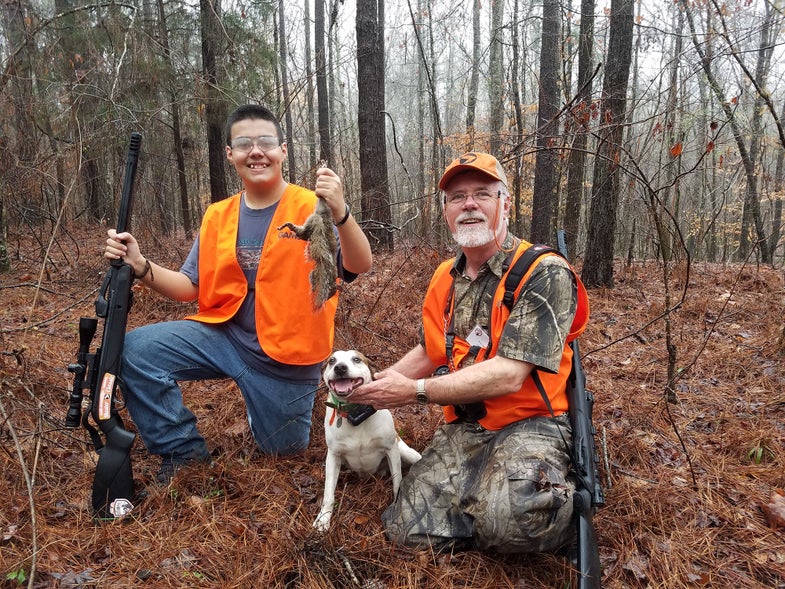 Squirrel dog Butch and Luke Christian with their first squirrel of the day. Larry Case
SHARE

Many of us started out on a BB or pellet gun and graduated to small game like rabbits and squirrels. Trouble is in these times of shrinking hunter numbers, fewer and fewer of our young people are going down that path. Four years ago Jackie Bushman of Buck Masters fame did something about that and created the Squirrel Master Classic. The event is held every year at the Southern Sportsman Hunting Lodge west of Montgomery in Alabama’s legendary “Black Belt” region.

The hunting and shooting competition is done with Gamo air rifles, the event’s sponsor. All of the hunters this year were supplied with Gamo’s new Swarm .22 caliber pellet rifle which features a 10 shot detachable magazine, eliminating the need to reload after each shot.

While the competition is intense for the coveted squirrel trophy awarded to the winners, the real emphasis here is on the young hunters. The TV personalities attending this year, Bushman, Michael Waddell, Travis “T-Bone” Turner, Kenneth Lancaster, Ralph and Vickie Cianciarulo, and Richard Eutsler along with Gamo’s President Keith Higginbotham and others at the event all recognize the need to encourage and nurture young people in hunting and the shooting sports.

In the end T-Bones’ team won and while we were all very pleased, I saw no smiles bigger than those of the young 4H shooters.