Photos: Hunting and Fishing Texas in the Wake of Hurricane Harvey

The destruction was catastrophic, but it's not all bad news for Lone-Star wildlife 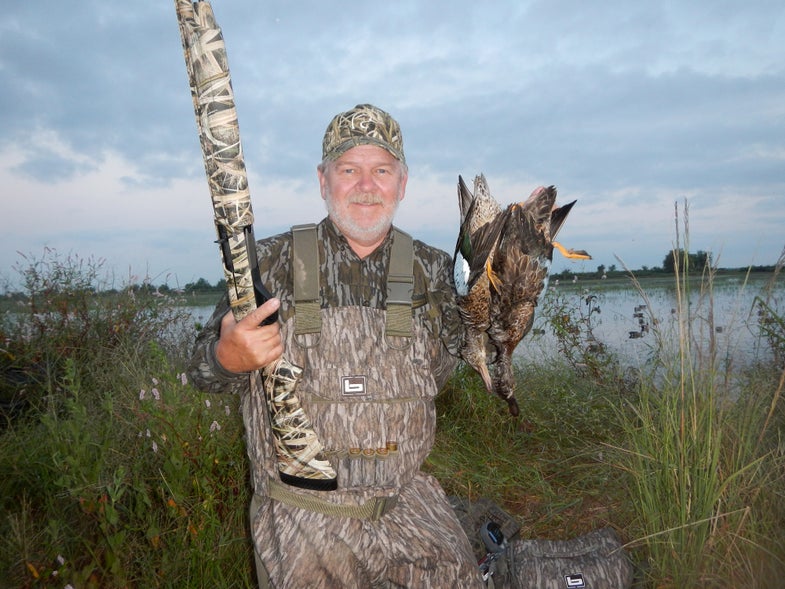 Joe Arterburn shows off a brace of blue-winged teal after his group limited out in about 45 minutes of hunting over decoys in a pond near the Texas Gulf Coast. Courtesy Joe Arterburn
SHARE

Though Hurricane Harvey blasted a wide swath of destruction through coastal areas in Texas and Louisiana—areas that provide critical wintering habitat for millions of ducks, geese, and other migratory birds—hunters and anglers should not shy away from the area. Many outfitters and guides are still open for business, and wildlife, including ducks and fish, rode out the storm and are starting to flourish from the storm’s after-effects.

Despite washing out dikes and water-control structures, the massive rains and storm-surge flooding accompanying the hurricane will ultimately improve the waterfowl wetlands, according to Ducks Unlimited biologist Taylor Abshier. Saltwater surging into wetlands will knock down many undesirable plants that are salt-intolerant, and allow more beneficial plants to flourish. There aren’t many benefits to tropical storms, but that is one upside. “Basically, [those storms are] a reset button for these marshes and wetlands,” Abshier said.

“From an ecological perspective, tropical storms are an important form of natural disturbance in coastal wetland ecosystems,” said Dale James, DU’s Southern Region manager of conservation planning. “They aid in maintaining wetland health and structure by resetting cycles of succession. Without periodically setting back succession, marsh can become highly vegetated with little or no value to waterfowl.”

Under normal conditions, land managers disk, mow, burn, or apply herbicides to get similar results in knocking back undesirable plants.

Bink Grimes, who operates Sunrise Lodge on Matagorda Bay, about 80 miles from where Harvey came ashore, said he has fielded numerous calls from hunters and anglers assuming their trips are off. Not so, he said. “As far as hunting, we haven’t seen any significant impact because the water drained off so quickly.” A hunting area that had been submerged under five feet of water drained and dried to a point where 10 days later dust kicked up from a Yamaha Viking’s tires.

Hurricane Harvey will have a beneficial impact on fishing, according to Grimes. Rainwater run-off, such as the massive floods that accompanied Harvey and reported 52 inches of rain in some areas, flushed bays, such as Matagorda and East Matagorda bays, and rebalanced salinity levels that had increased over years of drought.

“Our salinity levels were higher than the ocean because we couldn’t get flow,” Grimes said. But when “there’s a happy medium of balance” in salinity levels, the white shrimp, crab, and shad populations boom. “And when the bottom of the food chain flourishes, the top of our food chain flourishes, like our trout and our reds. That’s what’s happening and that’s all this flood’s going to do, just make it better.”

The fishing is still good in areas that took a direct hit from the hurricane, like Rockport (which has “probably more fishing guides than anywhere in Texas,” according to Grimes) and Port Aransas, but those wanting to fish and hunt should check with outfitters. “The fishing is fine in Rockport right now,” Grimes said. “It’s just that a lot of people have bigger problems. Some of the guides are still working on their houses. It’s getting back to normal a bit, but a lot of motels are still not in operation. Check with the outfitters and, if they’re ready, come down and support them.”

“A complete picture of Harvey’s impacts on the coastal landscape will unfold as water levels recede,” said DU’s Dale James. “As water and salinity levels return to normal, these beneficial waterfowl habitats should recover as early as next year. On the positive side, in areas containing invasive species such as water hyacinth and giant salvinia, salt water introduced from the storm surge can knock these plants back and provide room for re-colonization of beneficial submersed aquatic vegetation.”

“Due to the large amount of rain from Harvey, much of the landscape dependent on natural flooding should be available to waterfowl through mid-winter,” according to DU’s Dale James. “Large areas of naturally impounded ephemeral water in pastureland and depressional wetlands should be available, especially to early migrants such as blue-winged teal.”

A booming mosquito population necessitated ThermaCELLs and spray repellents to keep swarming bugs at bay during the wait between flocks of blue-winged teal. Hurricane Harvey dumped as much as 52 inches of rain in five hours on some areas, creating widespread pools, ponds, and puddles ideal for mosquito breeding. “They’re fierce,” Abshier said. “They are definitely worse than normal.” Bumping any vegetation resulted in a fresh cloud of mosquitoes. Outfitter Bink Grimes carried an aerosol can of insecticide to fog cedar bushes used as cover.

As far as duck hunting in a post-Harvey world, Abshier said, “I think it will be a really good year. We have a lot of freshwater on the landscape and the birds are probably going to be a little harder to stack into wetlands just because there’s so much water out there.” Ducks will have their choice of potholes and flooded fields, he said, possibly allowing them to scatter across broad areas, rather than concentrating on traditional wetlands. That may make them harder to hunt, but it will be good for the ducks.