9 Historic Survival Skills You Should Know

Technology is great, and all, but you can't beat the basics 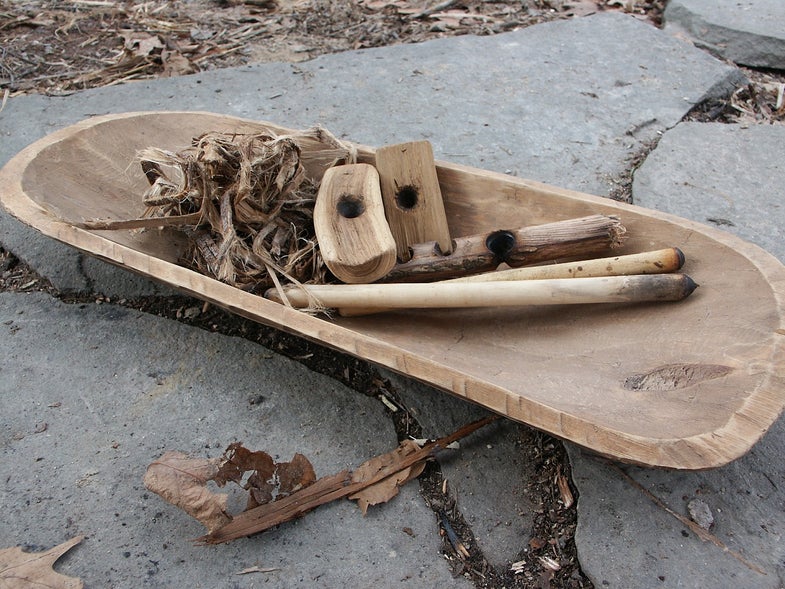 Pioneers, frontiersmen, long hunters, and mountain men were not fictitious characters of stories and film. These were our real-life ancestors, and they lived by their own means by performing real-life skills. In the wild places of today, it certainly makes sense to carry high-tech gizmos and the latest survival gear on your outdoor adventures, but it's not a bad idea to learn some traditional skills as a back-up. Follow along to find out about the skills that kept our predecessors alive.
SHARE

Pioneers, frontiersmen, long hunters, and mountain men were not fictitious characters of stories and film. These were our real-life ancestors, and they lived by their own means by performing real-life skills. In the wild places of today, it certainly makes sense to carry high-tech gizmos and the latest survival gear on your outdoor adventures, but it’s not a bad idea to learn some traditional skills as a back-up. Follow along to find out about the skills that kept our predecessors alive. 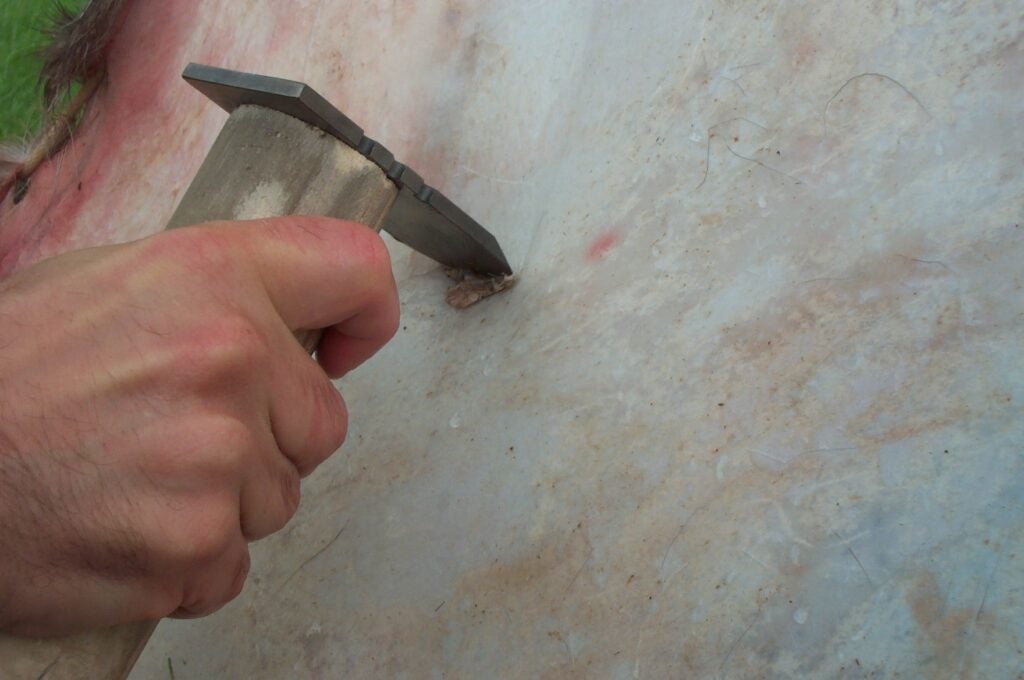 Before the invention of chemical tanning to create leather, animal skins were subjected to all kinds of strange concoctions to degrease and soften them. Urine, wood ashes, tree bark acid, and even toxic substances like mercury have been employed over the centuries to tan skins into useful leather. These all have their uses, but few natural substances have had such a long and successful track record (or are as odd to work with) as animal brains to tan hides. How does it work? Brain tissue is full of very fine oils that condition and soften the animal skin, as long as the skin is stretched and moved during the drying process. If you set out the skin to dry, no amount of brains are going to break down the glues that naturally set up in the skin. Instead, the result will be rawhide, which is great for the dogs to chew on, but not so great for making clothes. Keep the hide moving and stretching as it dries, and you will get something akin to chamois cloth. 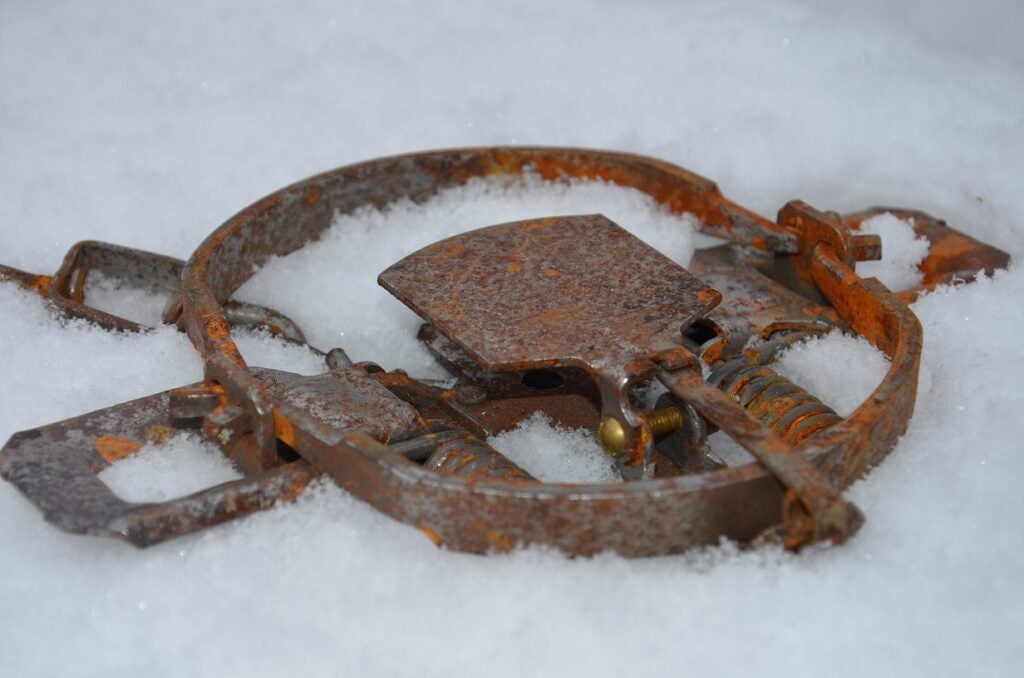 Trapping was a common means for American mountain men to collect valuable furs and feed themselves at the same time. Traps can be purchased or hand built today, just as they once were. Traps should be de-scented to remove human scent and the proper baits should be selected to attract your target species. Once you are ready to set out your traps, it’s time to create a trap line. This is typically arranged as a circuit that you can walk, to visit your traps and to collect your game. Depending on the animals you are trapping, this line may run down a creek, up a ravine, along a cliff base, or beside some other natural feature which funnels the animals into a smaller area. You could also set up along a swamp, deep in the brush, in the middle of a field, or anywhere else that has plenty of animal sign. This could be on private land, or on public lands that allow trapping. Of course you want your traps to be successful, but you should also be worried about the safety of your traps. Set them up in a place (or mark them in such a way) that people and pets do not become injured by the trap. Check your trap line daily.

How to Build 15 Survival Traps 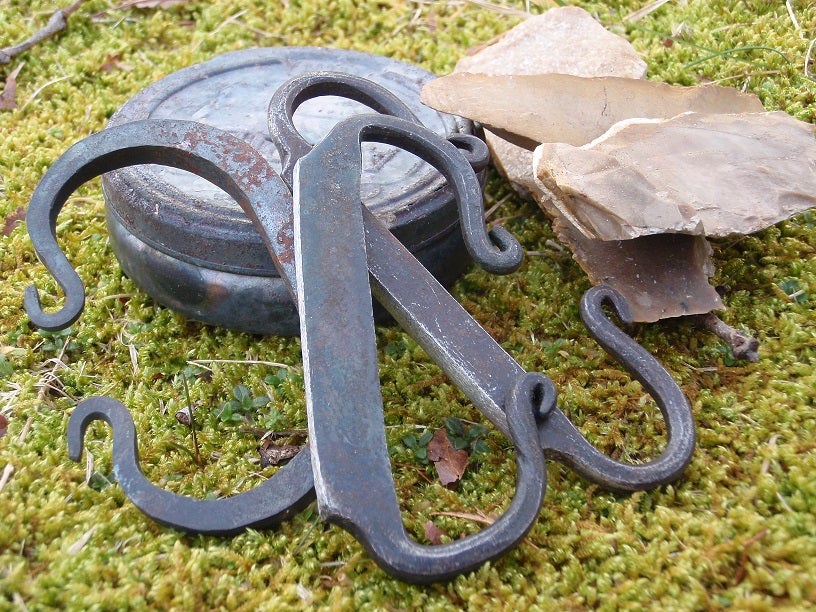 I love to use real flint-and-steel fire kits like the ones our forebears used long before matches were ever invented. When you strike a piece of high-carbon steel against a hard, sharp stone edge (like a flake of flint), you can create a red-hot spark. Strike the stone downward across your steel, holding the stone at a 45 degree angle to scrape off steel sparks. These sparks come from the carbon in the steel, and are created by any sharp stone that is harder than the steel. Strike your sparks onto char cloth that is already sitting on a bundle of tinder, or on a separate piece of char. See our post on char cloth from more details.

Video: How to Work with Flint and Steel 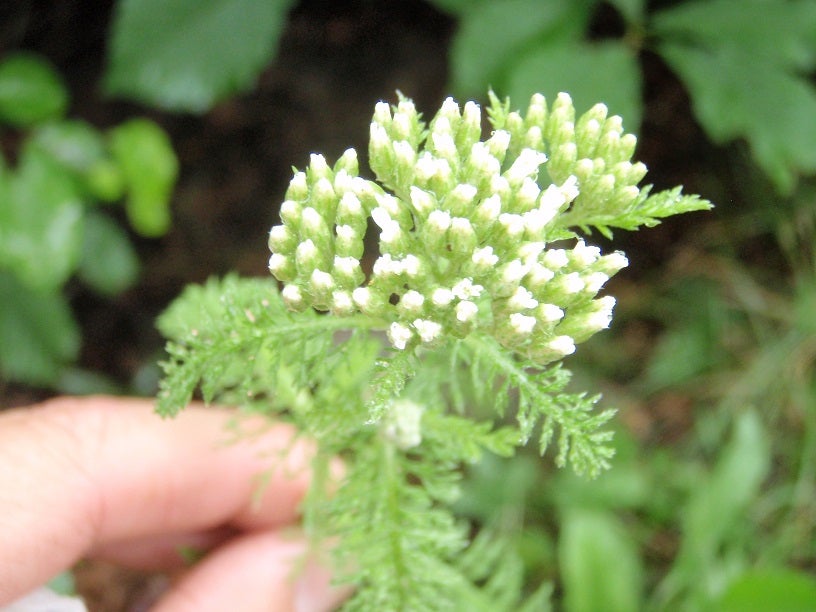 4. Make Your Own Medicine

To our forebears living in remote areas, the local wild plants had to serve double-duty as food and medicine. Making one’s own medicine was a well-known practice centuries ago, but it has fallen into obscurity since the advent of the corner drug store. Dig a little, though, and you’ll find the old connections are still there. Many of our modern medicines trace their history back to where they were first discovered in wild plants. Even the word “drug” is anchored in the past: It comes from the old Dutch word “droog,” which means dried plant. To whip up the most basic historical plant medicine, first positively identify yarrow (Achillea millefolium) or plantain (Plantago major). (FYI: That’s yarrow in the photo.) Crush either or both of these wild plants into a green paste and apply it to cuts, scrapes, burns, and scratches. This medicinal form is called a poultice, and it’s surprisingly effective at infection prevention and speeding up the healing of wounds. 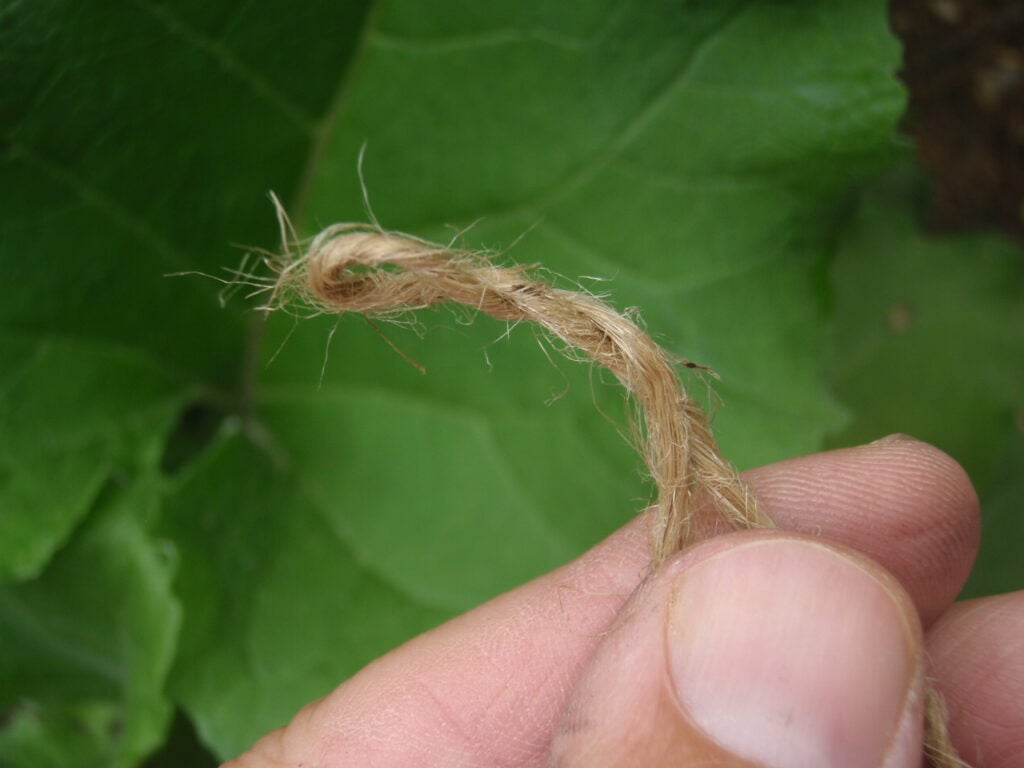 5. Twist Up Some String

There never seems to be enough cordage, rope, or string to go around. Unless you can make your own, that is. If you are fortunate enough to have some fibrous raw material and you know cord production, you should be able to crank out string and heavier cord without any trouble. Grab a small length of fiber, and twist it until it kinks. Hold the kink, and keep twisting each bundle of fiber. If you twisted clockwise to begin the cord, then keep twisting the fiber bundles clockwise, allowing them to encircle each other counter clockwise. Splice in more material to continue your cordage indefinitely.

How to Make Your Own String and Cloth 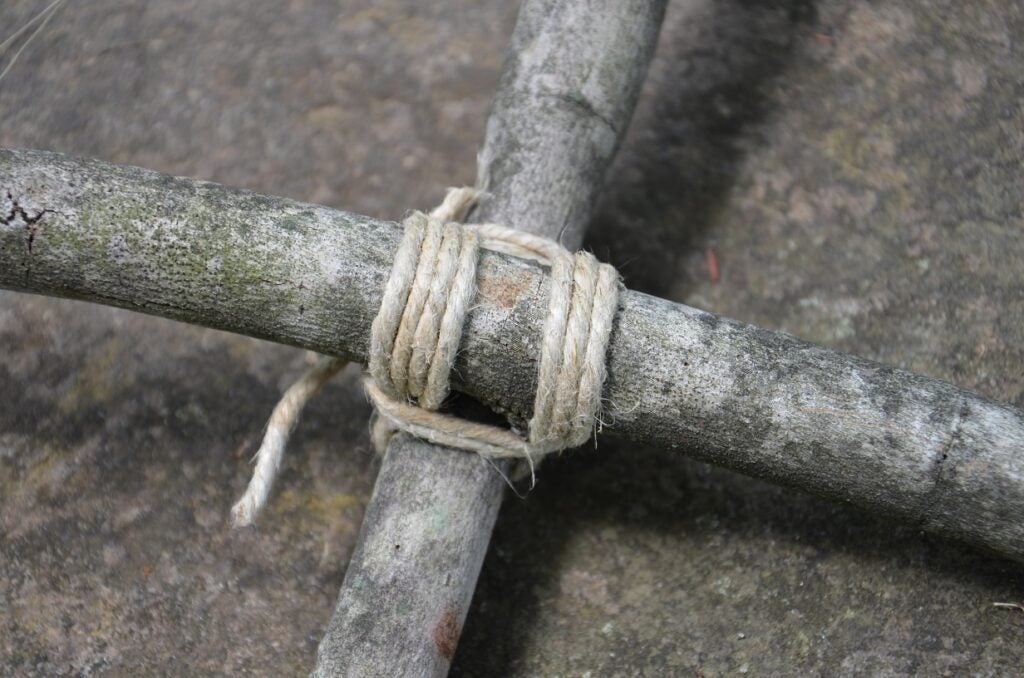 In order to build certain shelters (like wigwams) and most camp furniture, you’ll have to learn your lashings. The folks living a pioneer life on the American frontier knew all about lashings. By joining sticks to other sticks, they were able to create fences to keep in livestock, build handy structures for camp and farm, and even erect lookout towers to keep an eye out for hostile neighbors. One of the most essential lashings is the square lashing, which joins two perpendicular sticks together. To begin, tie a hitch to one of the poles near the place where the two poles cross. Then wrap your line around the junction of the two poles, going under the lower pole and over the top pole. Spiral outward with these wraps five or six times. Next, wrap between the poles, biting onto the previous wrappings to tighten them. Finally, use a square knot to tie the free end of the rope to the free end from the hitch that started this whole lashing. 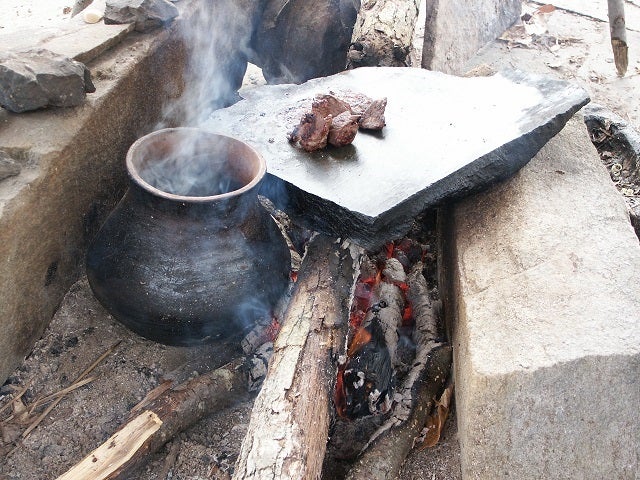 7. Cook Your Own Meals

With a lack of drive-thrus and other dining options, our forerunners had to cook for themselves all the time. This daily grind was absolutely necessary and generally for subsistence, not for flavor. Though fire-roasted meats are tasty enough, staple foods like porridge and gruel are decidedly NOT pleasant to eat. They ate to live, they didn’t live to eat. 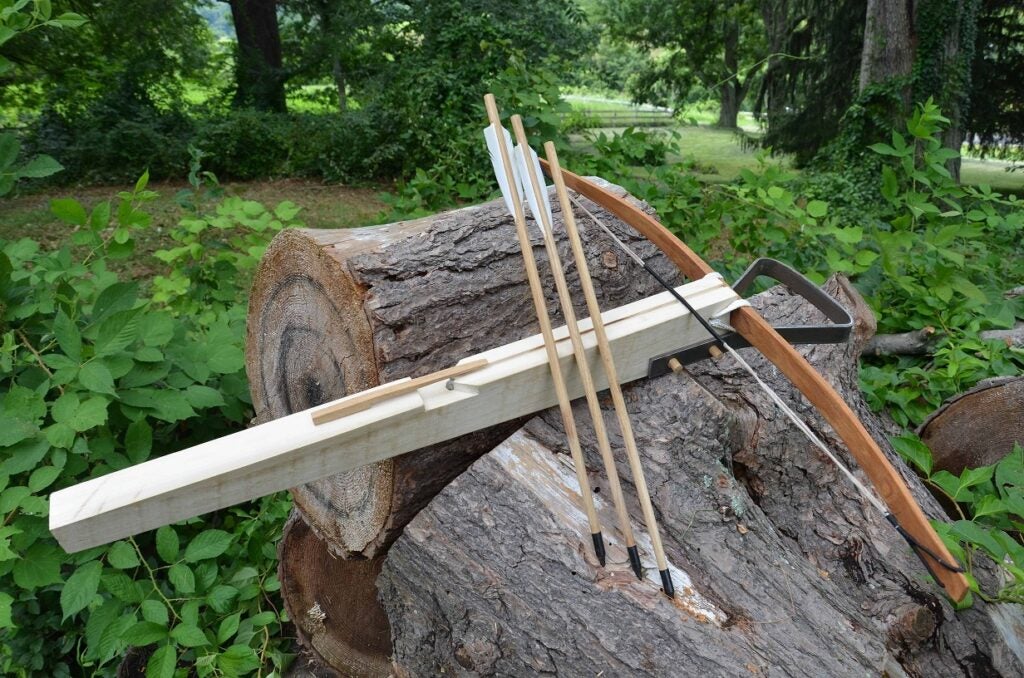 On average, ancestral life was short and harsh. Don’t ever get a romanticized version of history in your head. Our predecessors rarely felt safe. There was always a group nearby who either wanted their stuff or wanted them gone. If armaments were in short supply, our progenitors had to make them. Some of the easiest weapons to fabricate with limited tools and supplies are archery weapons like bows and crossbows. These weapons can be built and repaired in the field, just like they have been for thousands of years.

How to Make a Stick Bow 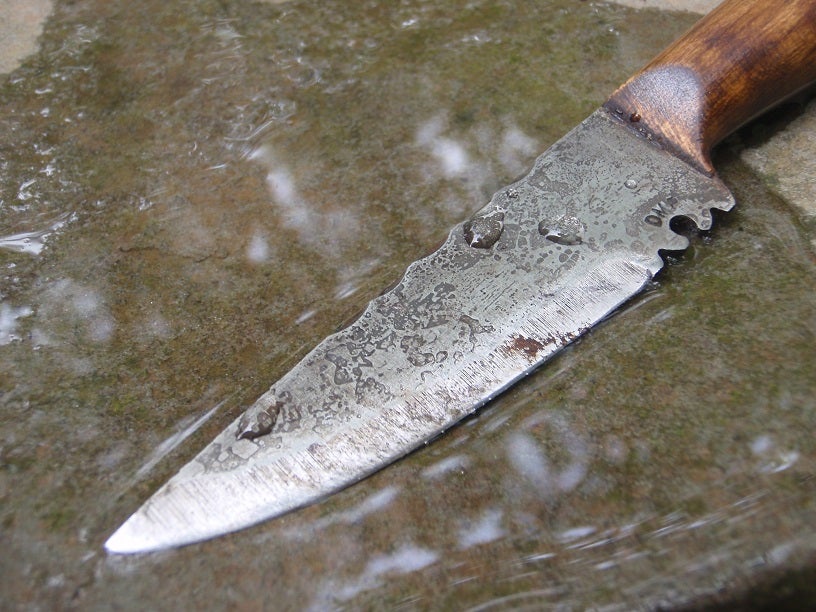 A blade to be sharpened

9. Mend Your Own Gear

In frontier times, if you wanted something that didn’t grow from the earth, you had to make it. And once you made something, you didn’t want to make it again, so you had to know how to repair what little you had. This meant sewing, woodworking, smithing, and a host of other skills. Not everyone could be a master of all trades, but some working knowledge of repair was required in each group or community. Learning to fix what we have can be a great way to make our tools and equipment last longer today.