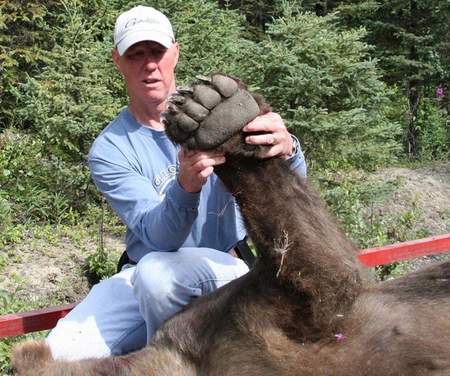 2. Best Handgun Shot Under Pressure Soldotna, Alaska fishing guide Greg Brush was walking his dogs not far from his home on the morning of Aug. 2 when he turned at the sound of a snapping twig. There, less than 20 yards away, was a charging 900-pound brown bear, "ears back, head low and motorin' full speed." In a single motion, Brush drew and fired his Ruger .454 Casull revolver. One shot proved fatal. "Came with zero warning," Brush later told the Anchorage Daily News. "No woof, no popping of the teeth, no standing up, nothing like what you think." Brush told the newspaper he carries a pistol on his walks because bears have chased his dogs in the past. "It doesn't get any closer. He slid by me on his chin when I shot him," Brush said. "I was backpedaling as fast as I could. I wasn't even aiming. I tripped over my own feet as I pulled the trigger." Brush estimated the bear weighed 900-plus pounds, and was 15 to 20 years old. It had grass packed in its molars and little fat on its bones. He said he figured the bruin was starving and saw an opportunity. "I never ever thought it would happen to me. It's always some other (guy), right? It totally wiped me out…(I was) dry heaving and hyperventilating, with some abdominal cramping." The fishing guide considers himself fortunate. "Total luck shot," he said. Here at The Outdoor Life Newshound, it's the best of 2009, in our book.
SHARE