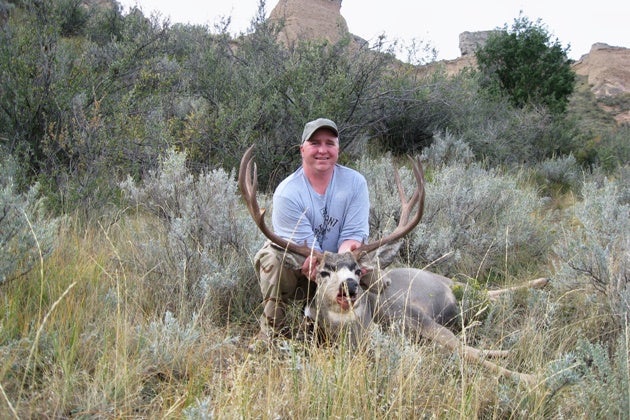 I was on a neighbor's ranch in southeastern Wyoming hunting with my wife's cousin. He is from South Dakota and decided to tag along just for the experience. We hunted in several places when we decided to go to a spot where I had seen good-sized deer the previous year. Just as I had hoped, a big buck ran up the side of a canyon and followed the same route I had seen a buck follow before. I took a couple shots though it was on a side hill and I couldn't get my bipod steady on the ground. My next shot was within 200 yards and I knew I had him as he looked through some brush in the bottom of a draw. All I could see was his head. I knew he was big so I didn't want to head-shoot him, so I aimed right below his chin. To my surprise, he was standing behind a bank that must have nearly covered him. Dust exploded from the place where his neck should have been. After that moment I thought I would never see a buck like that again,. From a mile away I saw him run into the next canyon and noticed that his rack was wider than his body. I let a monster buck get away. I thought. A couple days later I went back to the area. I heard some rustling in the brush to my right and turned to see a buck erupting from the brush about 50 feet away. He was running up the bank and he was so close I couldn't find him in my scope, so I looked around the scope found him and then put the crosshairs back on him. I shot him in the spine as he was running up the bank and then again in the shoulder. I had no idea he was that big until I got up to him and realized that I had shot a buck of a lifetime and didn't know it. I'm glad I didn't know how big he was so the nerves couldn't take their toll on my shooting.--David Otto.
SHARE