Falconry: A Showcase of Savage Nature 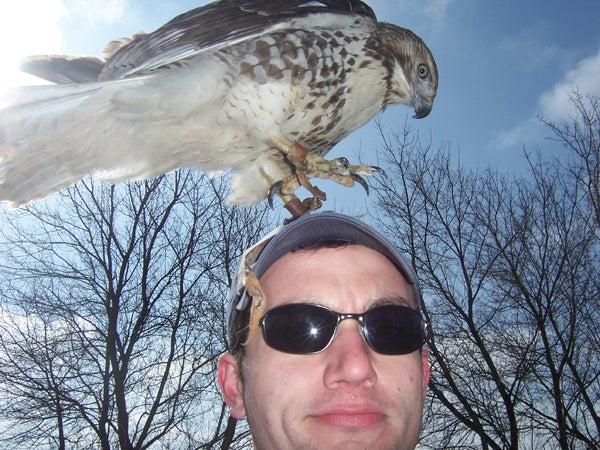 While serving in the U.S. Air Force at Ramstein Air Base in Germany, I walked into Nathan Frohne's room one day. Perched, tethered and still in the center of the single-room billet was a falcon. On its head was an unnerving leather hood--somewhat medieval in appearance. The falcon was calm, but its mien was uncomfortably grave. Nathan was preparing to feed it chicken parts. I was apprehensive about moving anywhere near the raptor. Nathan, who is a self-taught falconer, borrowed the Saker Falcon from Ramstein's local falconer. A falconer, or hawker, and their birds of prey, provide a much-needed service to airbases, airports or anywhere in need of bird control. They scare from the skies those birds that are lower on the food chain, birds which can create a deadly hazard for pilots and passengers, and that's something all of us can appreciate. Nathan eventually returned the bird to the falconer (he never would have passed room inspection with falcon crap all over the floor), but I was sufficiently intrigued by the sport of falconry. Years later, after Nathan and I had left the Air Force, he would make annual trips to my hometown of Philadelphia to fill up on cheese steaks, roast pork and other various Philly staples. Likewise I'd vacation in Oshkosh, Wisconsin, to fish with Nathan on Lake Butte des Morts, peruse the Milwaukee bar scene and eat butter burgers at Culvers. On my last visit to Oshkosh, in March of 2008, I finally participated in an art in which some find passion and excitement, and others find brutality and cruelty, when Nathan and I took out his red-tailed hawk in search of a meal. After witnessing hawking in person, I can attest to the brutality, but cannot vouch for the cruelty. Birds of prey will hunt lower fauna with or without human assistance, as it is their natural means of survival. Until these raptors learn more civilized ways, or until man domesticates them--perhaps conditioning them to eat Oscar Meyer Liverwurst--these hunters of the sky will continue to prey upon and devour their living quarry in a most primordial fashion.
SHARE