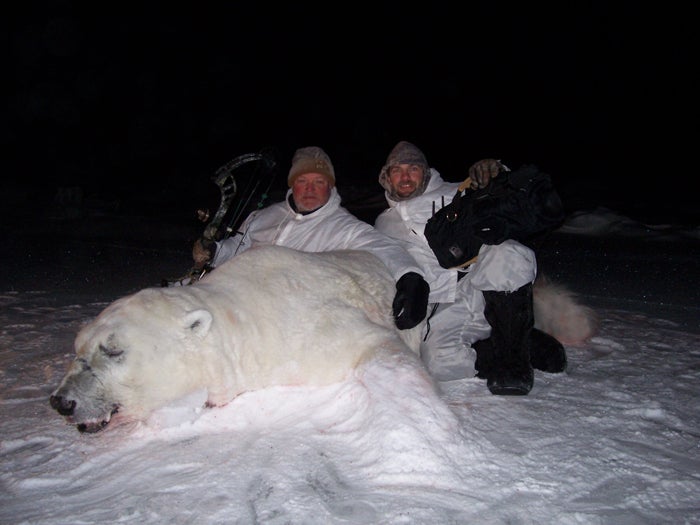 Jim and the guide had been correct about a bear being on the ice. At 3:00 AM, during the night after the wind switched, the watchdog warned of an approaching bear. The guide put the dog in the kennel to quiet him down and let the bear approach closer as Jim stood at his tent door with bow in hand waiting in the dim light. Before long, the bear's massive head appeared over the top of a pressure ridge as Jim turned to Mike and said, "you better get ready, cause he is one big son-of-a-buck." The brute continued to stroll into camp looking for a tasty canine meal. At 18 yards, he noticed Jim and Mike standing at the tent door, turned and began coming toward them. With camera rolling, Jim placed a perfect quartering, complete-pass-through shot between the bear's neck and shoulder and watched him retreat over the ridge. "I couldn't believe how calm Jim was," said Mike. "Most people don't have the nerve to face a polar bear at 18 yards, but it didn't seem to shake him up at all." The adrenaline was undoubtedly pumping through Jim's veins, but he has learned to control it until after the shot. "Anytime you hunt dangerous game with a bow, you can't even think about what could happen or you wouldn't do it to begin with," Jim said. "If you are bowhunting and have to get that close and make that commitment, something is going to die. You got to have it in your mind that it is going to be the bear and not you." Although Jim was after a trophy bear, the estimated, 1400-pound, 14-year-old beast exceeded his expectations. Although the skull is still waiting to be panel scored, individual, official measurements put the bear at 26 10/16 inches and qualifies Jim for the Pope & Young books once again, only this time with a new world record polar bear. Mike Haviland
SHARE