Can’t Make This Up 5

Can your dog perform the Heimlich maneuver? We didn’t think so! Wild and crazy outdoor stories that you absolutely can’t... 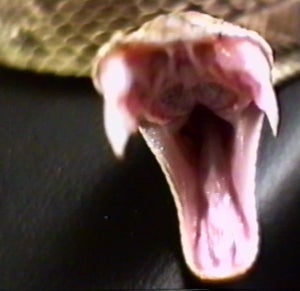 Fangs a Lot Not surprisingly, alcohol was reportedly a factor when a pet rattlesnake bit its extremely intoxicated owner on the finger while the man was playfully flicking its head, then bit him again on the lip and tongue after he attempted to kiss it. According to police Sgt. Gene Galitz's popular column "Cop's Corner," in the Lander (Wyo.) Journal, a man identified only as "Rattlesnake Bob" was driven to the emergency room at the Lander Valley Medical Center by his girlfriend. When he saw a patrol car at the hospital, he wouldn't get out, saying he hadn't had much luck with cops. Sgt. Galitz wrote that he attempted to persuade "Rattlesnake" to seek medical attention, but he refused. As it turned out, the snake apparently did not inject venom during the kiss. "I'll bet the next morning the snake woke up with a hangover and Rattlesnake Bob woke up wondering who pierced his tongue and forgot to put in the decoration," Galitz wrote.
SHARE

Can your dog perform the Heimlich maneuver? We didn’t think so! Wild and crazy outdoor stories that you absolutely can’t make up.