Two Booners In Less Than 24 Hours!

Buzz Tyre has collected countless whitetails in his over 50 years of hunting but never tried for mule deer or... 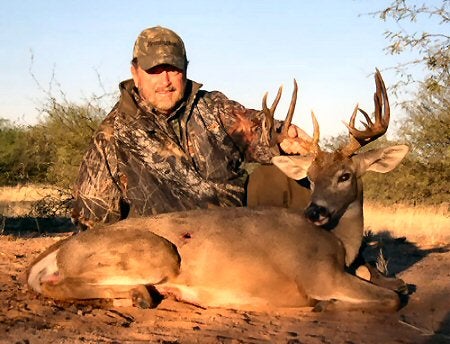 Buzz and his guide were at the water hole at dawn the next day, and while they saw several good bucks, the big Coues eluded them. Finally, they began a spot and stalk routine, and saw the deer at long range. They moved to the place they'd last seen the rutting buck, and hung in a tree a doe-in-heat scent attractant. Then they stalked again, returning to the scent attractant spot 90 minutes later. The buck was standing near the scent attractant, and Buzz took a 165-yard shot. The 130-pound deer dropped at 9:40 a.m., less than 24 hours after Buzz had shot his mule deer.
SHARE

Buzz Tyre has collected countless whitetails in his over 50 years of hunting but never tried for mule deer or a Coues deer. That changed on Jan. 9, 2009.